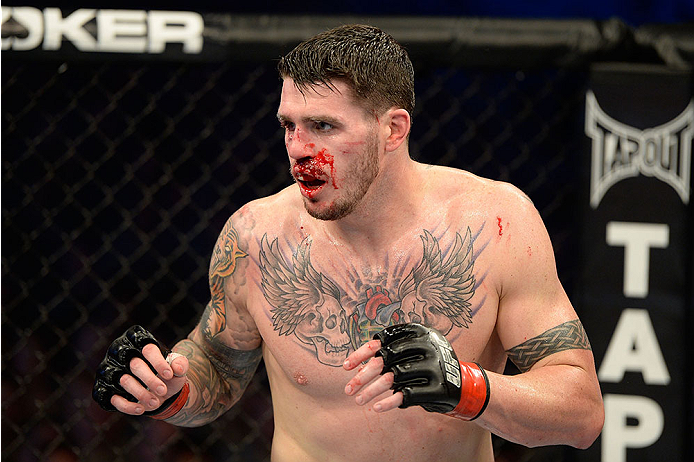 As one of those “glass is half full” people, Chris Camozzi may be the only fighter in the universe to come up with an upside for his aborted April bout with Andrew Craig in Abu Dhabi.

“There is an upside and a down side,” he insists. “I got to go to Abu Dhabi, I went to Dubai, and I had a whole trip planned after the fight. I got my show money, so I got paid, and the upside was that it was like a paid vacation. The downside being that it was a great training camp, I put a lot of money into it, I was ready to go, and I never felt that good going into a fight. Everything seemed aligned for me other than Andrew Craig.”

Craig took ill the week of the fight, and was forced to withdraw from the bout, something Camozzi suspected as the time ticked down to weigh-in day.

“I had not seen him at all,” he said. “We started thinking something’s up, but we continued forward. Then we heard a rumor that he was sick.”

Unable to substantiate the rumor, Camozzi went about his business of cutting down to the middleweight limit, which wasn’t easy for him this time around.

“I had a tough cut,” he admits. “Then I get on weight, I don’t even have time to go shower, I go into the warm-up room where we meet to go to weigh-ins, and Joe Silva and (Michael) Mersch pull me aside and say ‘hey, Andrew’s sick, he’s out.’”

As he mentioned, he got his show money and his “paid vacation,” but to put that much time into a fight and not even get to throw hands had to be a crushing blow, especially for Camozzi, who was looking to snap a two-fight losing streak. But he says that after a few days away from the rest of the universe, he was ready for the next call to action.

“Taking that trip to Dubai was a big plus,” he said. “It was four or five days of relaxing, so it gave me that reset that I needed anyway that I would normally do after that fight. I got the mental reset without getting my body banged up. This camp, I went into it in shape. I didn’t have to build back up.”

And at press time, Camozzi’s opponent this week at UFC 175 – Bruno Santos - is present, accounted for, and healthy. All that’s left are today’s weigh-ins and the Coloradan’s attempt to do his thing in the Octagon, which for him means putting on a crowd-pleasing fight. And even though Brazil’s Santos has an impressive 13-1 record, having 12 distance bouts doesn’t automatically make you think “Fight of the Night.”

“He’s 13-1 so he’s obviously stringing together some wins and is obviously dangerous like everybody is, but I think they’re putting me in there to make him fight,” said Camozzi. “Most of his wins are by decision, and guys are tough to finish at this level, but he had 11 (decisions) in a row, so I think they wanted somebody to go in there and test him and take it to him, and make him fight. I gotta think that’s why I got the call, because the fight with Andrew Craig, I said this is a bonus fight right here. Not to mention that the Abu Dhabi card had nine fights on it and four bonuses. I count that as a loss right there. (Laughs) I asked my accountant if I could write off fifty grand.”

But can the 27-year-old Camozzi turn it into a fight like his war with Lorenz Larkin last November? He believes he can, either that or a stoppage win for himself.

“What works out perfect is that I look at Santos and his fighting style and there were times in the past when I had trouble fighting people that weren’t as aggressive and that tried to avoid the contact more,” he said. “So it’s been years since I fought somebody like that and my coach and I have been planning around that for years. When I fought Dongi Yang at UFC 121, I was like ‘man, I’m having trouble hitting this guy. Every time I step in, he goes backwards and goes away.’ It was frustrating. So we made the adjustments and I remember specifically coming back after that fight, telling my coach how much trouble I had. So ever since then, we’ve been implementing it into training, and I don’t have that problem anymore. So I’m looking forward to putting it all together in an actual fight now.”

Just having an actual fight is a big deal for Camozzi, who hasn’t been able to hit someone in eight months. In the meantime, he and his wife worked on their online business Performance MMA, and Camozzi also kept his charity work going, this time teaming up once again with the Reddit MMA forum to gain awareness for nine-year-old Gabriel Santisteven’s fight against stage four brain cancer.

So it goes without saying that Camozzi's one of the good guys in the sport. You just don’t want to fight him on Saturday night.