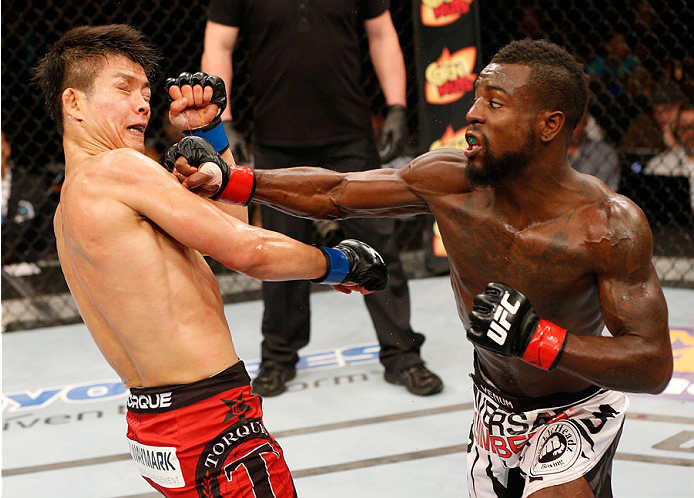 This time last year, Chris Beal was in No Man’s Land. He had finished up a stint on season 18 of The Ultimate Fighter but didn’t get a call back from the UFC, so he was preparing to fight his way onto the roster, beginning with a March fight against Keith Carson.

Sounds like a plan, but it was still a tough time for the Brooklyn-born flyweight, who went on to stop Carson and get a call to step in as one-half of the opening bout on April 26th’s UFC 172 card in Baltimore against Patrick Williams.

There, Beal landed a picture-perfect flying knee to the jaw of Williams in the second round, earning a UFC win, a Performance of the Night honor, and the top spot on many 2014 Knockout of the Year lists. With that one strike, everything changed and all the struggles of the previous months and years came rushing back.

“I almost had to put MMA on the backburner and get a regular job,” the 29-year-old Beal said. “To have those thoughts in my head and come out in my first UFC, second round, throw a flying knee, we were all very excited about that moment.”

When Beal talks about “We,” he refers to his coaches, his training partners and his family, particularly his 12-year-old son Chris Jr. To him, they’ve all played a part in him getting here, but Chris Jr. is the reason he does it all.

“Everything is for him,” Beal said. “I’m doing this so he has a great life and doesn’t have to worry about wanting anything. If he wants anything, he has the opportunity to get it. It was a struggle for me growing up as a child, and I don’t want him to go through that same struggle. And I want him to be proud of his dad and know that his dad is a good person. When you google our name, it means something positive, not negative, and we just have to work hard and keep that image up.”

Today, Beal is a few sleeps away from opening another UFC event, this one on Saturday in front of 30,000 fans in Stockholm, Sweden. The opponent is Ireland’s Neil Seery, and despite being less experienced than Seery overall, the unbeaten Beal is no neophyte when it comes to life in the UFC, having followed up his win over Williams with a second one over Tateki Matsuda in September. It’s a good time to be the “Real Deal,” and he hopes this year will be as good as the last one turned out to be.

“It was a life-changing year,” he said. “We had our ups and downs, but we just had to stay patient, and had to keep driving and striving to reach our goal, which was to get into the UFC. And once we got into the UFC, it was just to win fights, and I think we hit almost everything off the checklist. I would have liked to have gotten one more fight in the last year, but other than that, last year was a great year for me. Now I want to see if we can make 2015 even better.”

More wins and more bonuses would be nice, and just the fact that he’s able to discuss this as part of the UFC roster is a big deal for the former high school wrestler from Ventura, California, especially since the only male members of the TUF 18 cast to get shots in the UFC were finalists Chris Holdsworth and Davey Grant, and Tim Gorman, who was removed from the competition early on due to injury.

“I was a little bit surprised,” he said when asked about not getting a shot on the season finale show. “I really didn’t know what to think. But I thought it was going to take a little longer to get into the UFC than it took me. It took me one fight and I got the call back short notice and I was already prepared because I had just fought. I think everything happens for a reason and if I would have gotten the call right away, maybe I wouldn’t have been as motivated or ready for that fight (with Williams). I took some time to myself, reevaluated things, thought about things, learned some new tools and sharpened up my tools, and I think I got the call at the right time and we’ve been rolling ever since.”

But what about that knee, one that wasn’t just aesthetically pleasing in live motion, but in still pictures as well?

“When I hit him, I didn’t feel it, but when I landed and seeing the way he fell, I knew it was over,” Beal recalls. “It’s not something I throw a lot, but when I throw it, I throw it with a lot of force and a lot of power. I got a lot of height on it and there was a lot behind that shot. As soon as I saw him hit the ground, I knew there was no need to go on him anymore. It was a done deal.”

Now it’s time to do it all over again. A year after staring at an uncertain future, Beal has a future in the biggest promotion in the sport. It could almost make a fighter get overwhelmed with dreams and goals and thoughts of what happens next, but Beal is taking things as they come, with all his attention on Saturday night, but one eye on the future as well. If that sounds like an impossible feat, so do flying knee knockouts, and Chris Beal seems to have pulled that off just fine.

“I’m taking it a fight at a time because basically that’s all I can do,” he said. “I don’t want to look past anybody, and the next thing and only thing on my mind right now is taking care of Seery. But hopefully after that we get three more fights in this year and in another year we may be in talks for title contention, as long as we’re winning. But the moment that it does happen, I just want to make sure I’m ready mentally and physically.”