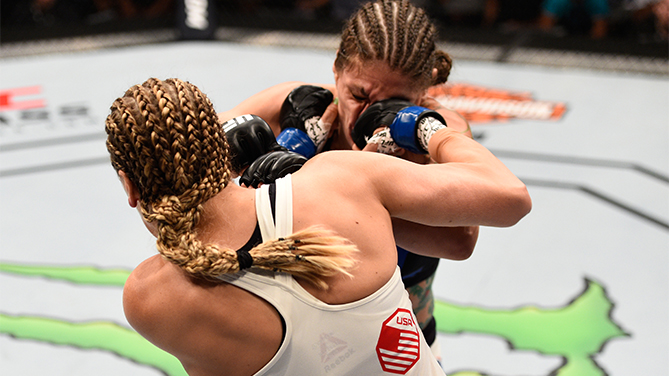 Octagon rookie Katlyn Chookagian made a successful entrance to the women’s bantamweight division of the UFC on Wednesday, scoring a three-round unanimous decision over veteran Lauren Murphy in UFC Fight Night prelim action at the Denny Sanford Premier Center in Sioux Falls.

Chookagian’s stick and move attack carried much of the first round, with Murphy taking a while to get in gear offensively. When she did, her leg kicks were her primary weapon, but they weren’t slowing down the New Jersey product.

Murphy got the bout to the mat in the second minute of round two, allowing her to nullify Chookagian’s striking game, and she kept her opponent grounded until the end of the frame, her ground-and-pound assault working effectively.

Working her jab once more in the final round, Chookagian kept Murphy at bay with a busy attack, bloodying and frustrating the former Invicta FC champ. Finally, Murphy threw caution to the wind with under two minutes left and rushed her foe, but the clinch against the fence didn’t produce the desired result, and a takedown attempt in the final minute also didn’t allow Murphy to turn things around before the final horn. 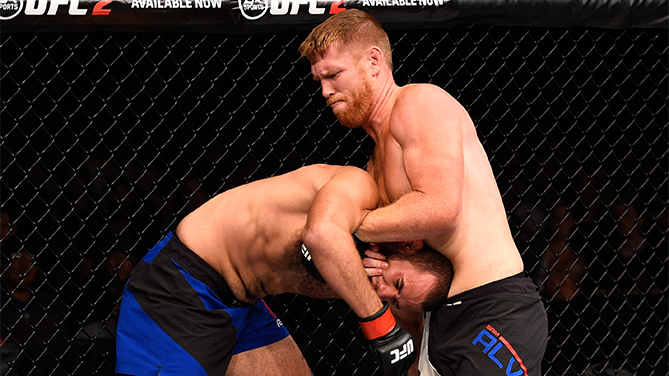 Eager to erase the memory of his June 18 loss to Elias Theodorou, middleweight vet Sam Alvey did just that against The Ultimate Fighter’s Eric Spicely, submitting the newcomer in the first round.

Spicely was willing to engage with the harder hitting Alvey, which cost him a couple times early, yet remarkably, it was Alvey’s submission game that won him the fight, as a grappling exchange along the fence allowed the Temecula resident to sink in the guillotine choke that forced the tap out at 2:43 of the first round. 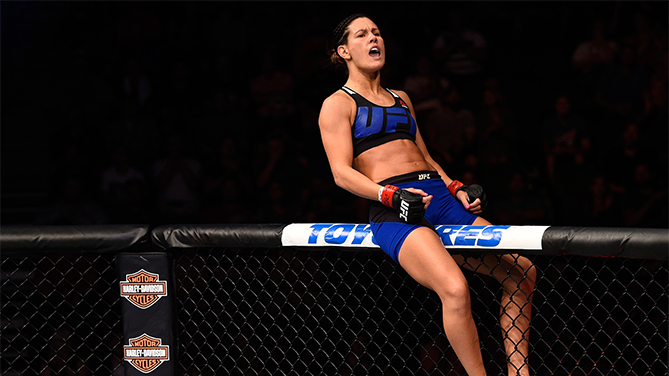 The third time was the charm for strawweight Cortney Casey, who won her first UFC bout in three tries, emphatically stopping Cristina Stanciu in the opening round.

One minute in, Casey took Stanciu to the mat and landed right in the mount position. Casey landed some hard elbows before the two got upright again, but moments later, “Cast Iron” took the bout back to the mat, and Stanciu wasn’t going to escape a second time, as Casey fired off elbows that forced referee Bobby Wombacher to stop the fight at the 2:36 mark. 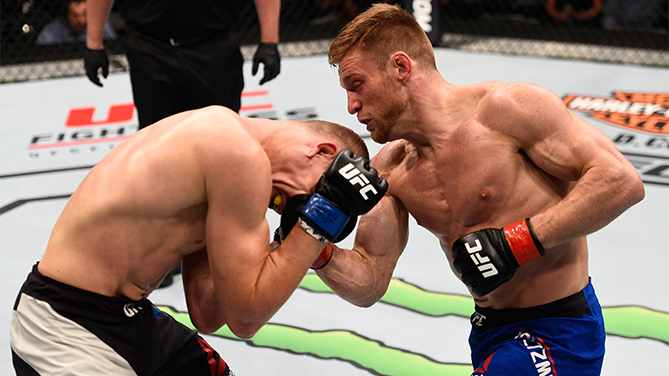 An entertaining scrap between lightweights Scott Holtzman and Cody Pfister went the distance, with Holtzman pulling out a hard-fought three-round decision via scores of 30-27 twice and 29-28.

The fighters got after it from the time referee Kevin MacDonald waved them together, with Holtzman holding the edge thanks to some solid head movement that tired Pfister and made him miss. In the second minute, Pfister did land with a short elbow that put Holtzman on the deck, but the Knoxville native rose quickly and regained control for the rest of the frame.

A head kick early in round two put Pfister on the mat and extended Holtzman’s lead, and within moments, he took the mount position, but Pfister powered out of trouble and into his opponent’s guard. Holtzman did a good job in getting back to his feet, and the two proceeded to battle against the fence until “Hot Sauce” scored a takedown. The back and forth scrap continued there, the two switching positions of control.

The final round remained competitive, but Holtzman was a step ahead throughout, with his ground-and-pound attack ultimately proving to be the deciding factor as he improved his record to 9-1. Amarillo, Texas’ Pfister falls to 12-6-1.