Chookagian proved to herself that she belonged in NYC 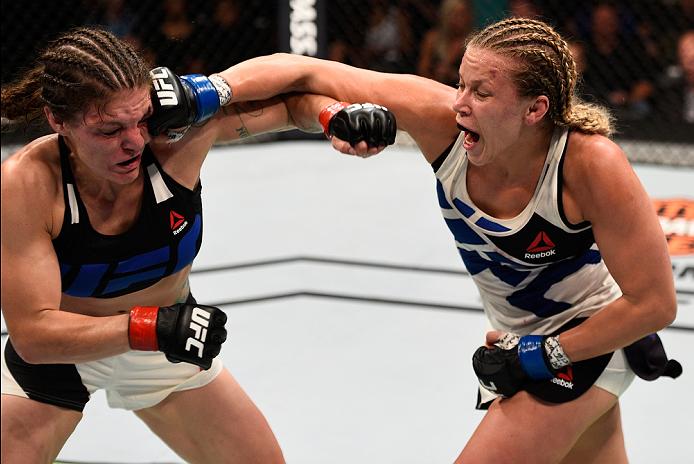 Katlyn Chookagian was five minutes away from her first professional MMA loss, and she and her coach Mark Henry knew it as the New Jersey bantamweight rose from her stool for the third round of her UFC 205 bout against Liz Carmouche.

“All right, you lost those first two rounds,” Henry said. “You need a knockout to win.”

Chookagian had her doubts.

“I was thinking, ‘Well, that’s not gonna happen; I don’t have knockout power, so I’m gonna have to try and get a submission or TKO.’”

Then she landed a head kick on Carmouche and almost ended the November fight, only to see the former world title challenger weather the subsequent storm and pull out a split decision win. Chookagian had her first loss in nine fights, but she gained a lot in Madison Square Garden that night.

“After that fight, it was my first loss in MMA, but I’ve done boxing and kickboxing and jiu-jitsu, and I’ve lost, so I know what that feels like and I know what it’s like to come back,” she said. “And if anything, even though it was a loss, I think that fight gave me more confidence and made me become more eager to get back in there again.”

The confidence comes from a logical place. In only her second UFC bout, the 28-year-old nearly defeated a top 10 bantamweight, but more notable is that the former flyweight proved to herself that she wasn’t too small to compete with the best 135-pounders in the world.

“Once I started in the UFC, that’s when I moved up a weight class and I had that in the back of my head that these girls are all strong, they’re all veterans, and I think I put them on a pedestal and put myself down a little bit,” she admits. “My coaches would always say how good I am, but I thought I’m the only girl around here, so they don’t really have other girls to compare it to. I always came up with excuses and almost didn’t believe them as much. After that fight, I realized that even though I lost, my coaches are right.”

But what about that whole knockout power thing? Henry set her straight on that one with a little reminder after the fight.

“I told Mark, ‘Well at least now I have confidence that I have knockout power.’ And he said, ‘What are you talking about? In the last year, there were three guys in sparring that you knocked out with head kicks.’ Oh yeah, I guess you’re right. (Laughs) So it was something that I’ve always had, but I never really had the confidence in it.”

Confidence can make a good fighter great and make a technical fighter dangerous. With those tools in hand, Chookagian was eager to get back to business as soon as possible. A fight with Mexico’s Irene Aldana was proposed for February’s Halifax card, but Aldana was still recovering from an injury. Chookagian pushed for the bout to remain intact, and it is, with the two standup specialists slated to meet on the UFC 210 card in Buffalo on April 8. If any fight has the potential to steal Fight of the Night honors from the bigger names competing that night, it’s this one. And Chookagian knows it.

“Any fight gets me excited,” she laughs. “After my last fight, I had no injuries and I was so eager to get back in there. But stylistically, this is a really fun fight. I’m excited because we’ll both be able to showcase our skills.”

On paper, Chookagian and Aldana match up perfectly, as they’re both strikers with busy styles that will leave little room for a break. Chookagian has been a fan of Aldana since she was competing in Invicta FC, and while both are coming off losses, this is a fight that can make the world forget those defeats in a hurry. And with the bantamweight division being home to a series of seasoned vets, this fight will showcase the next generation of the weight class in style and kick off a move up the ladder for the winner. Chookagian is planning to be the one getting her hand raised next month.

“I’ve always had it in my head that the goal was to win the title and I just wasn’t in it to say that I was in the UFC,” she said. “I’m in it to make a run for the title, and I’m getting better with each fight, where some girls have already peaked. I’m still new in the sport and I’m hanging in there with the top of the division, so I’m only more confident that my goal of becoming a champ will happen.”