Chookagian Gets Her Madison Square Garden Fight After All 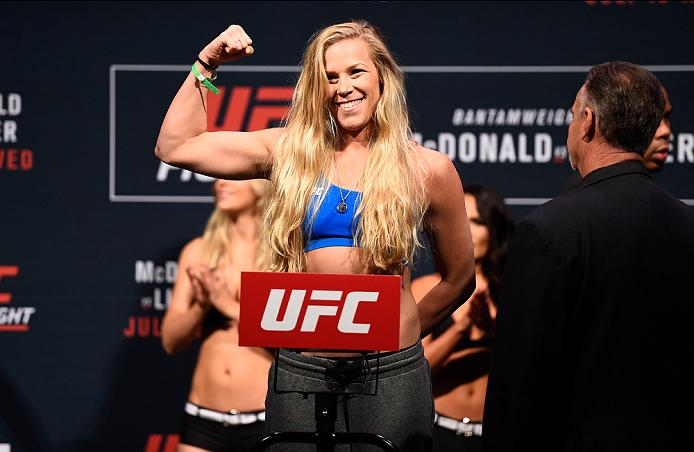 Katlyn Chookagian thought her opportunity to fight in Madison Square Garden had passed her by.

A win over one of the greatest female boxers to ever emerge from New York City, Christina Cruz, would have put the Pennsylvania native in the Mecca of boxing, but a split decision loss in the New York Golden Gloves semifinals instead sent Cruz to win another one of her record ten titles in the storied tournament.

Chookagian eventually moved on to mixed martial arts, and on November 12, she gets her MSG fight.

Call it glory delayed, not denied, and Chookagian won’t just be on the first UFC card to be held in Madison Square Garden; she’ll be the first mixed martial artist to compete in the building when she faces Liz Carmouche in the UFC 205 opener. That’s a lot of pressure, but Kenilworth, New Jersey’s “Blonde Fighter” isn’t feeling an ounce of it.

“I’ve had a lot of fights,” she said. “Including amateurs, this is like my 15th fight and I’ve done a bunch of boxing and kickboxing fights before I started MMA, so every fight feels kind of the same. This fight is awesome because I’m on the same card with my teammates Frankie Edgar and Eddie Alvarez, so being on the card with them and having that energy in the room during the camp has definitely helped. But I don’t feel any extra pressure.”

If anything, the 27-year-old thought that nerves might get to her in the lead-up to her UFC debut against Lauren Murphy in July. But against the former Invicta FC champion, Chookagian fought like an old pro en route to a unanimous decision win that lifted her pro MMA record to 8-0 and showcased a slick striking style that had her one step ahead of Murphy all night. 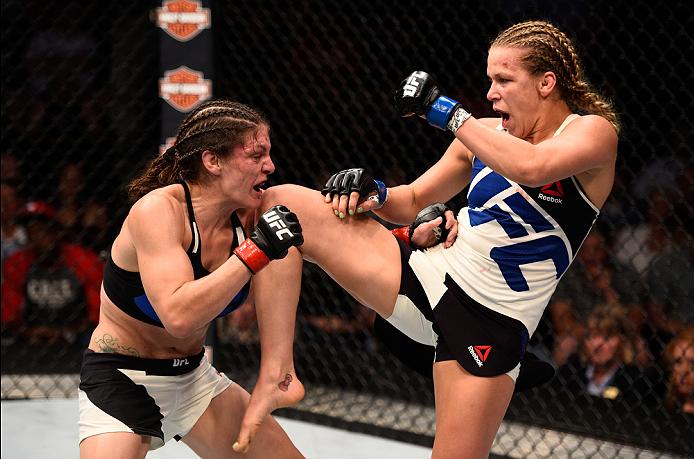 “That’s how we train all the time,” she said. “I see some fighters, they fight and then they go on vacation for a month. That fight, I took it on two weeks’ notice, and when I fought in regional promotions, my last couple fights were five-round fights, so coming off that to a three-round fight was a lot easier. But the biggest thing I work on all the time with my coaches Mark (Henry) and Jamal (Patterson) is footwork. That’s what we do non-stop. I train 15 sessions a week and three days of sparring, whether I’m in camp or not, and we spar exactly how we fight, so that’s what helps it become natural. It’s almost like I’m doing it without thinking. Sometimes when I’m in there, I feel like I’m a robot for my coaches. (Laughs) Whatever they say, I do exactly that and it’s been working for me, so I trust them.”

In addition to her technical skills, Chookagian delivered a fast pace that kept her in control throughout the Murphy bout, and that’s something that will likely aid her against former world title challenger Carmouche, who will be coming off a 19-month layoff by the time the two step into the Octagon. That work ethic isn’t just developed in the gym though. It’s developed in several gyms, as well as on the road as Chookagian travels all throughout New Jersey and even to Brooklyn and Manhattan to get her work in.

“I don’t want to complain because some people live in areas where they go to their gym and they have two coaches and that’s it,” she said during a week in which her car battery died and she got two flat tires during her travels. “I’m lucky to have these different opportunities around me. Yesterday, I went to Gleason’s to spar, but I’m not complaining because I get to box with world champions. I go to Renzo’s and I train with girls and guys that are black belt world champions. I wrestle with State champions. So the little bit of sacrifice to spend driving everywhere and traveling is definitely worth it.”

That’s a lot of sacrifice. Plus, you can add in that her boyfriend lives in Long Island. But she laughs it off because she doesn’t know any other way than this. She says even days off produce the thought of going to the gym, while a proposed break after a fight could lead to her being in the gym on Monday, “Just to watch.” But that’s the way she’s built.

“It’s my lifestyle,” Chookagian said. “I’ve done martial arts my entire life since I was four years old, so I don’t know anything different. All my friends are through training and I just can’t picture my life without it. Even when I’m retired and old I’ll probably still be doing jiu-jitsu.”

But for now, she’s in the UFC and ready for the Madison Square Garden fight she’s been waiting for. There will be no retiring anytime soon.