Chiesa Thinks It's Time to Pass the Torch 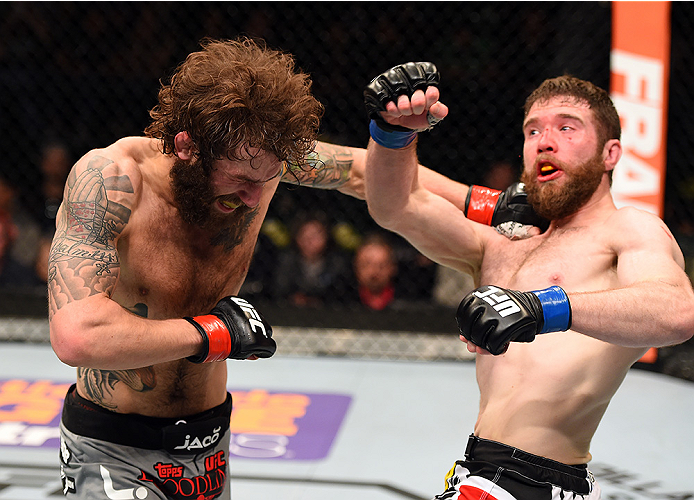 Michael “Maverick” Chiesa believes it’s time for some UFC veterans to pass the torch to the younger crop of fighters who have begun to lay their claim to the promotion’s spoils, and he’s setting out to prove his point when he takes on lightweight veteran Jim Miller on December 10 in the co-main event of UFC Fight Night: Namajunas vs. VanZant in Las Vegas.

In Miller, Chiesa faces someone whom he has watched perform long before he entered professional MMA, and he’s eager to dispatch one of the original fighters who paved the way for his own career path.

“Honestly, it’s one of those things where you can’t make it more than what it really is,” he said. “You know, I’ve fought guys that I’ve been watching since before I ever even started training. Unfortunately, those are two of the guys I came up short against (Joe Lauzon and Jorge Masvidal). But it’s one of those things where it’s part of the sport, and as I’m getting older I’m realizing that this is the passing of the torch that I’ve seen as I’ve watched MMA. This is a sport that I’ve been very, very fond of and I’ve followed ever since it first really came into the limelight.”

Chiesa says he’s learned a lot from those losses, and this time around he’s not going to let another one of those old lions he’s looked up to get in the way of his success.

“I have to put all that stuff aside for 15 minutes and I’ve just got to go out there and take advantage of my moment,” he said. “So it’s one of those things where I just have to treat him like he’s any other guy, any other dude, just another person in my way. “

At age 27, Chiesa isn’t any spring chicken, and he thinks now is his time to make a run for the title. He’s in this sport to be the best, and anything other than that would be a complete waste of his time. To that end, he left his home in Seattle to train in Vegas at Syndicate MMA under the watchful eye of John Wood, where he’s found success before.

“I was able to get one of my better wins when I did a camp with John Wood and his team at Syndicate, so it’s one of those things where I’m pulling out all the stops for this fight,” he said. “I’m gunning for a world title, and Jim’s a guy that’s just right in the bottom of the top 15, and I know if I just go out there and impose my will and just put it on him, I know that I’m going to get my name where it belongs, in that list of the top 10, top 15 guys. I’m gunning to be a champion. I won’t accept anything less. This is something that I expect of myself.”

Indeed, lightweight is a division that has been in flux since the Frankie Edgar era, where the belt was tied up in somewhat of a rematch purgatory as the champ fought back-to-back-to-back rematches with BJ Penn, Gray Maynard and Benson Henderson.

For Chiesa, this fight is also a bit of a homecoming back to the Octagon after a long layoff in which he not only bought a home, but also built it mostly with his bare hands.

“I completely remodeled the whole thing,” he said. “This is a goal I’ve had for a long time; buying a house and getting myself established. I have always told myself that fighting is going to provide me a home. It did. I don’t get off on having flashy watches and cool cars and stuff. I’m a very realistic guy. I just got my dream home.”

It’s a sentiment that is shared with his New Jersey born and bred opponent Miller, who drives a pick up truck and is known for hunting for most of his food, crafting his own beer and building custom furniture in his garage. In fact, Chiesa has nothing but respect for Miller and the things he’s done and the way he carries himself in and out of the ring.

“Jimmy has always been nice to everyone he encounters, and that’s the way I am too,” he said.  “Jim brings a lot of things to the table. He’s a shorter guy but he’s pretty barrel-chested. What concerns me is if you go back and watch the whole film on Jim Miller, you’re talking about a relentless finisher. He is most dangerous in round one. If you watched the Joe Lauzon fight, that was like a 10-7 first round – he busted him wide open. He’s got a lot of weapons. He’s got great submissions. He’s got good stand-up. He knows how to use all his weapons.”

All of that said, “Maverick” says he doesn’t think he’s outmatched anywhere, and plans to impose his size on the smaller Miller in order to dictate where the fight goes. Plus, he knows southpaws have traditionally posed problems for his opponent.

“He lost to Nate Diaz and Beneil Dariush, both southpaws,” he said. “I’m the biggest southpaw he has fought yet. And not only am I a big southpaw, but I’m very dangerous. I’m going to go out, do what I do, come forward, fight, go for the finish, and get my hand raised.”

If you are a fan of Chiesa, you probably know about his TUF run, where he was permitted to leave the house to attend his father’s funeral, whose death has always been a driving factor in his life and career. These days, while not over the trauma of losing his biggest fan in front of the whole world, time does make things easier, and he’s also found a brother-in-arms whom he looks up to more than any other training partner he’s encountered along the way.

“One person that’s been a big part of my life is Sam Sicilia,” he said. “Ever since I met him, he’s been like a big brother to me. People don’t realize that we’re not just teammates, we’re not just great friends. We’re not even best friends, we’re brothers.

As crazy as it sounds, he’s almost kind of fulfilled that big void I’ve had with my dad passing. Like I said, my dad was always the person to keep me in line, and Sam is that guy. If I’m screwing up, he’s the first person to be like, ‘Dude, get your stuff together.’ I don’t think I would be where I am right now without his friendship and support.”