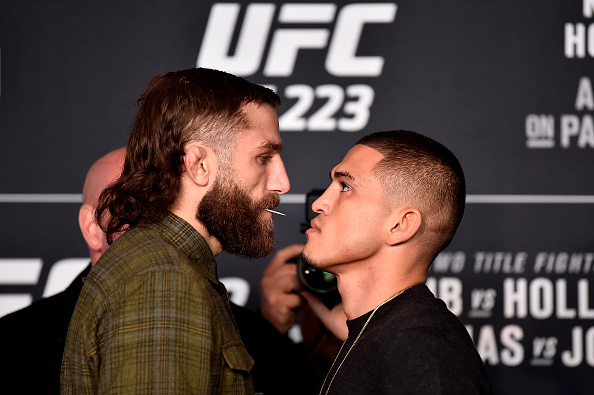 Before Derrick Lewis and Francis Ngannou start throwing sledgehammers at one another and prior to the twin championship bouts that top the UFC 226 marquee hit the cage, a pair of veteran lightweights looking to resume their climbs toward the top of the division will collide.

Michael Chiesa and Anthony Pettis were initially scheduled to meet earlier this year at UFC 223, but the fight had to be postponed when glass from a broken bus window following a melee in the Barclays Center loading dock left Chiesa unable to compete. With both fighters having lost their most recent appearances in the Octagon, delaying the bout didn’t sit well with either man, but it had to be done and the contest was quickly rebooked for this weekend at UFC 226.

Following a brief sojourn to the featherweight ranks, Pettis returned to the division he once ruled last year, kicking off his lightweight comeback with a unanimous decision win over Jim Miller at UFC 213. Four months later, “Showtime” landed a main event assignment opposite the surging Dustin Poirier, but after two spirited rounds, the former champion verbally submitted early in the third frame after suffering a rib injury.

“I wanted to keep going, but the body triangle was tight and when I tried to twist out of it, I popped a rib,” Pettis explained back in April. “At that point, I had the blood on me, the rib popped and in my head I was like, ‘I don’t know how bad this rib is.’ It freaked me out because I heard the pop and I felt the pressure.

“I think if it would have kept going, I was getting more energy and feeling better in the fight, but you can’t cry about it. You’ve got to just keep pushing forward.”

Chiesa arrives in Las Vegas shouldering similar frustrations, having been out of action for more than a year after suffering a controversial submission loss to Kevin Lee last June. Like Pettis, he was eagerly anticipating the matchup at UFC 223 in April, as it was a chance to get right back into the cage with an established name – a former champion – and start a new winning streak.

Prior to his contentious loss to Lee, the former Ultimate Fighter winner had earned three straight victories, grinding out durable Canadian Mitch Clarke before collecting consecutive rear-naked choke finishes of Miller and Beniel Dariush. But injuries slowed his momentum and the main event setback last summer dropped him back in the rankings, leaving “Maverick” in need of a strong performance in order to get back into the title chase.

Although a victory here isn’t going to earn either man a title shot in the deep, competitive and congested lightweight division, Saturday’s main card clash between Chiesa and Pettis does carry rankings ramifications and will play a significant role in determining what the rest of their 2018 fight campaigns look like.

Separated by just three stops in the rankings – Chiesa sits at No. 9, Pettis at No. 12 following the most recent update – the winner should maintain a place in the Top 10 and in the mix for high profile matchups that are afforded prime real estate in the second half of the year. Things won’t be as straightforward for whomever comes out on the wrong side of the results though, as not only will they need to break out of a two-fight skid, but they’ll also be stuck in the lower third of the Top 15, where matchups against hungry, emerging competitors looking to advance their careers by beating established names abound.

Neither veteran is particularly fond of the idea of facing up-and-comers nor being a stepping-stone in someone else’s journey towards the top of the division, so expect both men to come out with a heightened sense of urgency and showing a little desperation when they hit the cage on Saturday night at T-Mobile Arena.

From a stylistic perspective, this is a crackerjack of a fight between a pair of talented competitors who possess more diverse and varied offensive games than they often get credit for from fans and observers.

While Pettis will forever be known for his “Showtime Kick” and is viewed as a flashy striker, the former lightweight champion has actually earned more victories by way of submission than knockout and does a very good job in scrambles. He’s an opportunistic finisher on the ground and has worked on both his offensive and defensive wrestling since arriving in the UFC, which affords him a greater ability to dictate where the fight takes place.

Chiesa is the opposite – a respected grappler who hunts for chokes and has only ever won by submission or decision, but has improved his striking repertoire by leaps and bounds during the course of his six-plus years on the UFC roster. Although he hasn’t put anyone away with strikes, the tenacious Spokane, Washington native uses strong fundamentals to set up his entries and put himself in a position to initiate grappling exchanges.

As obvious as it sounds, this one is going to come down to where the fight takes place and who dictates the terms of engagement.

Though Pettis’ submission defense is outstanding, he’s not likely going to want to spend 15 minutes on the canvas with Chiesa, while spending the duration of the fight trading shots with Pettis in the center of the cage isn’t likely to appeal to Chiesa all that much either.

Tune into the UFC 226 Pay-Per-View on July 7 to see how this one plays out.