Even though Michael Chiesa has a lot of respect for Diego Sanchez, he has no intention to become part of his "swan song."
By Gavin Porter • Jul. 3, 2019

Michael Chiesa is no stranger to competing on UFC’s International Fight Week card. At UFC 226 last July, Chiesa attempted to make the tough cut down to the lightweight limit, but failed. He would also come up short in his fight against Anthony Pettis.

But after switching weight classes from 155-lbs to 170-lbs, Chiesa believes he has created a new foundation for his UFC career.

“This is finally going to be kind of like my coming out party,” Chiesa said. “I’ve been holding myself back with these weight cuts for so long. I think it’s finally time to let it all hang out and show people how great I am.”

That party that Chiesa is referring to is a UFC 239 showdown with original Ultimate Fighter winner Diego Sanchez. Like Chiesa, Sanchez moved up to welterweight after a couple losses prompted him to make a change, and the Albuquerque native has put together back-to-back wins over Craig White and Mickey Gall coming into this weekend’s bout.

Chiesa saw immediate dividends in his welterweight debut, putting away former champion Carlos Condit in the first round.

Weight cut aside, Chiesa’s success also stems from changing his mentality and realigning his focus.

Chiesa isn’t focused on beating the scale anymore; he is focused on growing as a fighter and defeating a superstar in the form of Sanchez. Chiesa is a fan of Sanchez and his fighting style, and he thinks it will be the type of fight that fans want to watch.

“For a guy that likes to come forward like Diego does, I don’t really have to do any mental preparation because that’s the way I like to fight,” Chiesa said. “It makes my job easier. If a guy’s going to come at me, I’ll meet him in the middle as well and we’re going to fight. I’m not a point fighter, I’m not looking to go win decisions. I’m looking to finish guys and I know Diego’s the same way. I think it’s going to be fireworks. There’s a reason why we’re opening the main card of the pay-per-view.”

Chiesa looked like a totally different fighter against Condit and he expects to show off more of his true talent on Saturday. Growing up watching Sanchez made Chiesa a fan, but he knows that he must take his opponent out.

“It’s an honor to fight a guy like Sanchez,” Chiesa said. “But in the same sense I’m not here to be part of his swan song. I’ll be a fan of his outside of when we compete, but once it’s go-time, then I have to beat him.” 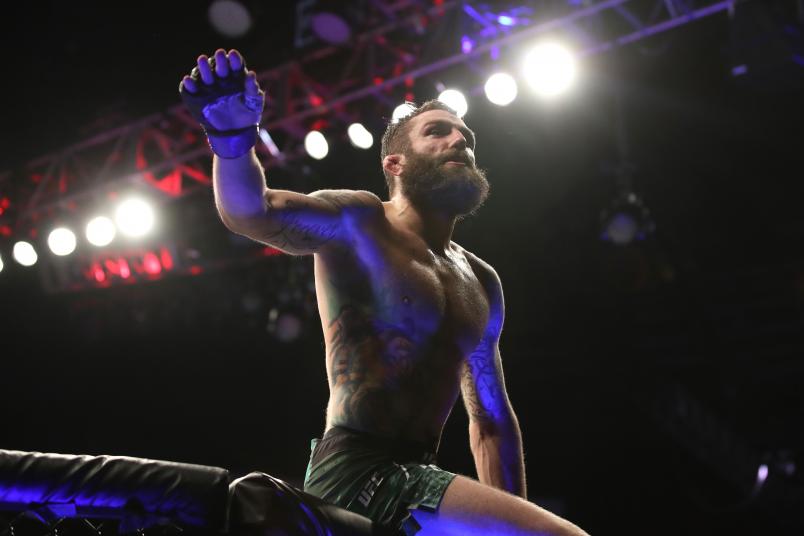 INGLEWOOD, CA - DECEMBER 29: Michael Chiesa celebrates after defeating Carlos Condit in their welterweight bout during the UFC 232 event inside The Forum on December 29, 2018 in Inglewood, California. (Photo by Christian Petersen/Zuffa LLC/Zuffa LLC via Getty Images)

INGLEWOOD, CA - DECEMBER 29: Michael Chiesa celebrates after defeating Carlos Condit in their welterweight bout during the UFC 232 event inside The Forum on December 29, 2018 in Inglewood, California. (Photo by Christian Petersen/Zuffa LLC/Zuffa LLC via G

A win over Sanchez would help solidify Chiesa’s new chapter at welterweight and put him back on the track toward his ultimate goal of winning a UFC title.

“I have aspirations of becoming a world champion, so however long it takes, that’s what it’s all about,” Chiesa said.”

The UFC 239 main card starts live on PPV at 10pm/7pm ETPT. Make sure you tune in to see if Chiesa can have the performance of his career against the original Ultimate Fighter.