Chidi Njokuani Aims To Put On A Clinic

UFC Middleweight Chidi Njokuani Wants To Follow Up His Excellent UFC Debut With A Dominant Performance Over Duško Todorović At UFC Fight Night: Holm vs Vieira
By Gavin Porter, On Twitter @ItsGavinPorter • May. 18, 2022

With 15 years as a professional fighter under his belt, Chidi Njokuani couldn’t have been more ready to make his UFC debut in February.

He had anticipated that everything outside of the actual fight would be different, but he knew that once that Octagon door locked it would feel just like home. So, he finally made the UFC walk, full of confidence and excited for a tough fight against Marc-Andre Barriault.

16 seconds in – the fight was over. Njokuani had knocked Barriault out. The KO would go down in a tie for the 13th fastest finish for a debuting fighter in UFC history.

“I wish I could do it again,” Njokuani laughed in an interview with UFC.com. “It meant a lot. I couldn’t write out the story any better. It’s not like I just jumped into the game and got a UFC debut. I’ve been doing this for the longest and I’ve been trying to get in for the longest, and to finally get in and make a debut like that, it was like the cherry on top.”

Njokuani didn’t expect to defeat Barriault in such quick and decisive fashion. He was expecting a three-round battle with the Canadian middleweight, but he’s certainly not disappointed with how the fight turned out.

Although the result was phenomenal, the best part of the win had to do with the people that had been by Njokuani’s side for years.

“In all honesty, I could feel the difference on how people viewed me,” Njokuani said. “At the same time, I could see all the people that saw my rise from when I started out and how proud they were of me. It was a big shift, and I can finally say I saw that.”

Witnessing that shift for the first time only added to Njokuani’s motivation to follow up his stellar debut with an amazing performance against Duško Todorović at UFC Fight Night: Holm vs Vieira. The 33-year-old knows that coming out flat against Todorović would waste the momentum he gained in his debut. 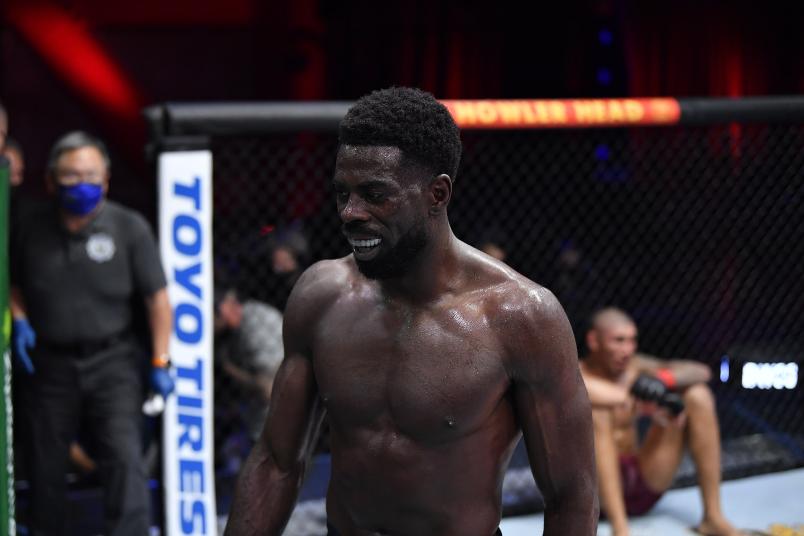 For that reason, Njokuani hit this training camp with a different level of ferocity. He didn’t want to fall into that lull of chasing a quick knockout just because he knows he can get it.

“I’ve been doing this for a long time, so I know in these moments, just be cool, don’t even worry about that last fight. It’s like it didn’t even happen,” Njokuani said. “Just go out there and do your thing.”

Fans who didn’t see Njokuani compete in other promotions outside the UFC or only saw his 16-second fight with Barriault might not know what to expect from the ‘new’ middleweight prospect. Njokuani believes this bout with Todorović will be their true introduction to what he brings to the Octagon and what type of fight he puts on.

“I want them to look at me and see something different,” Njokuani. “I want to put on a clinic and have them respect that.”

To put on a clinic, Njokuani will rely on his Muay Thai background and the experience he’s gained over the course of 29 professional fights. Those bouts helped him achieve a new level and have made him the best version of “Bang Bang” to ever strap on MMA gloves.

And he’s confident he’s going to prove it by putting it on Todorović this weekend.

“Everywhere we go, you’ll just see how dominant I am and that’s it,” Njokuani said. “I’m always one step ahead and I want to show that.”