Chicago Talking Points: Where do Shevchenko, Holm go from here?

The landscape of the women’s bantamweight division has changed drastically in the past eight months. Ronda Rousey, the division’s longtime queen, has been out of action since losing the title to Holly Holm at UFC 193.

Holm quickly became the new face of the division, but her time on top was short-lived. “The Preacher’s Daughter” lost the title to Miesha Tate, who in turn dropped the championship to Amanda Nunes at UFC 200. Holm continued her run of bad fortune Saturday night in Chicago, dropping a unanimous decision to Valentina Shevchenko (49-46, 49-46, 49-46).

The loss for Holm is the first time in her professional fighting career that she dropped consecutive fights. Eight months removed from the top of the mountain and Holm is forced to rebound from two straight losses and an almost guaranteed fall in the rankings.

“I’ve never in my career, whether it be boxing or MMA, felt like I’m at the top because I know there’s always someone aspiring to be the best,” Holm said. “I never look at a division and think I made it to the top and I’m just going to stay there. There’s always people that are hungry and want to get better. I know there are competitive girls in this sport. There’s a lot of competition in our weight class.”

Mixed martial arts can be an unforgiving sport.

But on the other side, Shevchenko collects her second UFC victory and called out the champion, Nunes, after the fight, asking for a rematch to avenge her only UFC loss.

So there’s Rousey, Holm, Nunes, Tate and now Valentina Shevchenko, who inserted her name in the middle of the crowded title picture at 135 pounds after taking out Holm. And don’t forget about Julianna Pena.

Safe to say the women’s bantamweight division is stacked.

Where does Shevchenko and Holm go from here

A win over No. 2-ranked Holm and a close fight with the current champ certainly has Shevchenko at the front of the line when it comes to title shots.

Here’s the problem for the Kyrgyzstan fighter: the front of the line is overflowing with qualified contenders. Rousey’s rumored to be returning sometime later this year and Pena is coming off a win against Cat Zingano and is undefeated in the UFC in four fights.

But Shevchenko knows what she wants and she’s not shy about asking for it.

“This is what I want,” she said. “This fight with Amanda that I had before, she won not because she was more strong than me but because I gave her opportunity to win the fight. I know next time I will do much better.”

Holm is still learning her craft as a mixed martial artist. The 18-time boxing world champion has adapted to MMA at an fast pace, but there are still some parts of the game she needs to work on.

She loads up on her punches and at her size she is usually the slower fighter. Shevchenko was making her pay for her speed disadvantage, blasting her with counter punches every time she came popping in for combos or one-punch shots. Holm’s kicks are devastating when they land, but her accuracy needs to improve.

Now Holm will find out what she’s really made of as she goes back to Albuquerque, New Mexico and licks her wounds before preparing for her next UFC fight. A fight that has become a must-win situation.

Barboza kicks his way into contention

Edson Barboza left Gilbert Melendez hopping on one leg after a brutal kicking assault that had the former Strikeforce champion limping by the end of three rounds.

Like any great baseball pitcher, Barboza has his favorite pitch and it’s the blistering leg kick. Barboza generates scary power with his legs and is able to attack at different levels in super speed. It’s like someone is sitting on the TV remote and everything is happening with the fast forward button pressed down.

With his exiting style and now second-straight signature win, Barboza is on the cusp of the top level of the lightweight division. He took out former UFC champion Anthony Pettis in his last fight and now a former champ in Melendez.

Next for Barboza could be a high-octane title eliminator fight with any of the top three in the division: Khabib Nurmagomedov, Rafael Dos Anjos or Tony Ferguson, who holds a win against Barboza.

Just a quick look at Francis Ngannou is all it takes to realize his eye-popping physical prowess. He looks like a linebacker and moves like a wide receiver.

Oh, and he’s a heavyweight. And the rest of the division is officially on notice. 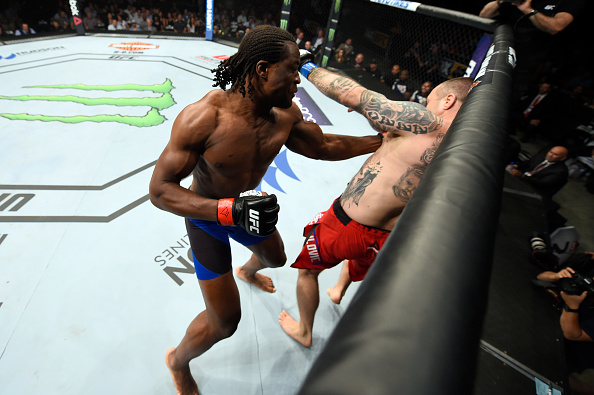 Rothwell may be right, but the 29-year-old is just eight fights into his UFC career and his skill set is only beginning to bloom. The heavyweight division has been starving for prospects for years and in Ngannou it may finally have one worth getting excited about.

Herrig rebounds and reasserts herself in division

It wasn’t too long ago that Felice Herig was making big waves in the strawweight division as a member of Season 20 of The Ultimate Fighter.

Herrig’s personality and exciting fight style made her one of the more popular fighters to come off the show and into the UFC ranks. But after a devastating loss to Paige VanZant, Herrig took time off to deal with some personal issues and refocus her efforts.

The fighter that emerged from the layoff could be a serious problem for the strawweight division. Herrig is a talented fighter with experience in a division that’s still in its infancy. Herrig was ranked in the Top 10 at points early in her career and with the second-fastest submission win in strawweight history now in her back pocket, expect her to rise once again.