“I feel the fastest I’ve ever felt and the strongest I’ve ever felt. I look at this as an opportunity to be in the best shape I can be. It’s been a really awesome camp."
By Thomas Gerbasi • Feb. 28, 2019

It’s the worst question you can ask any fighter, a wasted query in most instances because if the answer to “How’s training going?” was negative, the fighter wouldn’t tell you anyway.

But if that fighter is Macy Chiasson, a featherweight making her first drop to the bantamweight division this week to face Gina Mazany in Las Vegas, it’s as appropriate a question as you can get. And unlike many in this same situation, Chiasson is happy to respond. Yes, happy.

“It’s going great,” she said. “I feel the fastest I’ve ever felt and the strongest I’ve ever felt. I look at this as an opportunity to be in the best shape I can be. It’s been a really awesome camp. My cardio and endurance is great and I’ve looked good. I’m excited for everyone to see me.”

Excited? Happy? This isn’t what is expected from a 5-foot-11 featherweight cutting down to 135 pounds. But it’s evident in her voice that, yeah, bantamweight ain’t too bad, even though it’s not something she had ever really considered until recently when coach Sayif Saud suggested it.

“Initially, I said there’s no way,” Chiasson said. “I’m big, I’m 5-11, and usually people at 5-11 walk around a little bit heavier. It was a lot of hard work this whole camp, but I’m ready to go and I feel great. I never thought I’d feel this good at the end of camp, going down a lower weight class.”

Being at her optimal weight and feeling good about it is a benefit in itself, but the real upside for the Ultimate Fighter 28 winner is that at bantamweight, she’s got a lot more prospective opponents than at featherweight. But the Louisiana native isn’t ruling out a return to her former division.

“It’s really nice to know that I have a lot of options,” she said. “And if sometime in the future, they want us to fight at a higher weight, we’re willing to go up and down, which is what a lot of bantamweights do anyway.”

To get to 135 pounds, Chiasson has been leaning on the folks at the UFC Performance Institute in Las Vegas, and she can’t sing the praises of the facility and its staff enough.

“We’ve been talking multiple times a week and we’re doing it the right way,” she said. “At no point have I ever starved myself this whole camp. Do I want to eat a burger? Of course I do. Do I want to eat pancakes and waffles? Of course I do. Do I want some ice cream? Yeah. But to perform at the best of your ability, you have to put into your body what your body needs. You have to put good food into it.”

And as weigh-in day approaches, she can’t wait. Really.

There is still a fight to be fought, though, and all eyes are on Chiasson after her impressive UFC debut in November, when she submitted Pannie Kianzad in the second round. The victory lifted her pro MMA record to 4-0. And while Mazany doesn’t exactly dwarf her in experience at 5-2, three fights are three fights, and “Danger” will have that edge on Chiasson, who isn’t too worried about such matters. 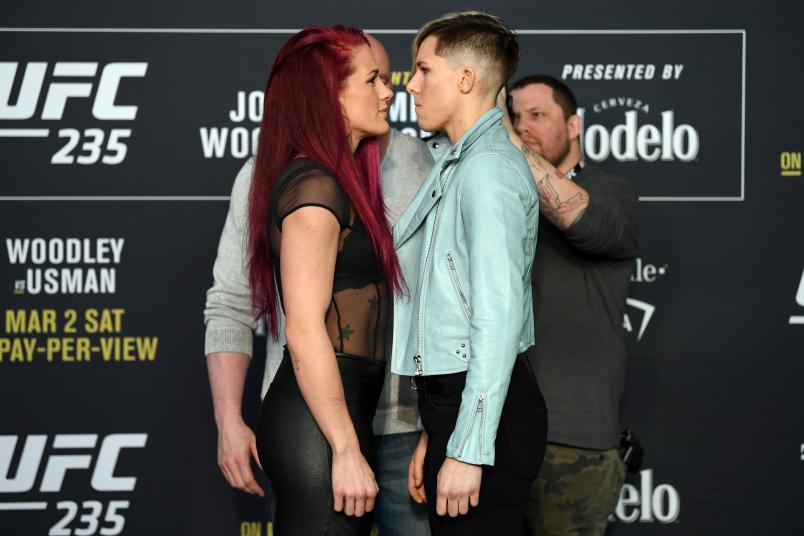 As for fighting in “The Fight Capital of the World” on a big UFC 235 card, again, Chiasson is unrattled. In fact, she considers Vegas a home away from home after spending six weeks there in the TUF house.

“I look at Vegas as a hometown as far as fighting goes,” said Chiasson. “So I’m totally excited that we’re fighting in Vegas. As far as the card goes, I’m not intimidated, but I’m really excited to be in the room with other athletes that I’ve looked up to my whole life. Jon Jones and Cody Garbrandt and all those people, so it’s actually really cool being able to warm up and perform and just be in that atmosphere.”

And though she will keep her inner fan girl in check this week (or at least attempt to), she won’t dull her enthusiasm for all things fighting. That’s the true secret of her success.

“It’s really important for me and I think it should be for a lot of people who fight, especially in the UFC,” Chiasson said. “Those are your motivators, those are the people you grew up watching, and finally, you get to be next to them. You get to soak it in, you get to watch them warm up. I remember for the Finale that RDA (Rafael Dos Anjos) was warming up right next to me. It definitely made me a little bit nervous. (Laughs) But you can’t lose that fun factor, you can’t lose that motivation. It’s a part of your growth in the sport.”