Bantamweight Continues Whirlwind Tour At The Top Of The Sport In Ottawa
By Thomas Gerbasi • May. 2, 2019

Macy Chiasson let us down.

For all the talk of burgers, pancakes, waffles and ice cream before her bantamweight debut against Gina Mazany in March, it was expected that her post-fight meal would be something for the record books.

“To be honest, it wasn’t too bad,” Chiasson laughed. “I woke up and just had a big breakfast. It wasn’t anything super bad that you would think. It was eggs, bacon, and I did have a few pancakes, but it was just a nice, big, filling breakfast.”

“It was a champion’s breakfast, but it wasn’t anything crazy,” she said, and while there will be no epic tales of Chiasson tearing up Las Vegas’ restaurant scene with a reckless abandon, that was the only disappointing thing about the Ultimate Fighter winner’s first visit to 135 pounds, as she looked sharper than ever in halting Mazany in less than two minutes.

“I felt super light and explosive on my feet,” said Chiasson. “I just felt like a better athlete all-around.”

Now 5-0 as a pro with four finishes, Chiasson was stronger, faster and better in her new weight class, and the kicker was that the 27-year-old didn’t suffer to cut the extra ten pounds. Well, suffering is relative, and you would assume that running anywhere from 15 to 30 miles per week during training camp would cause one to suffer. But Chiasson did the work. 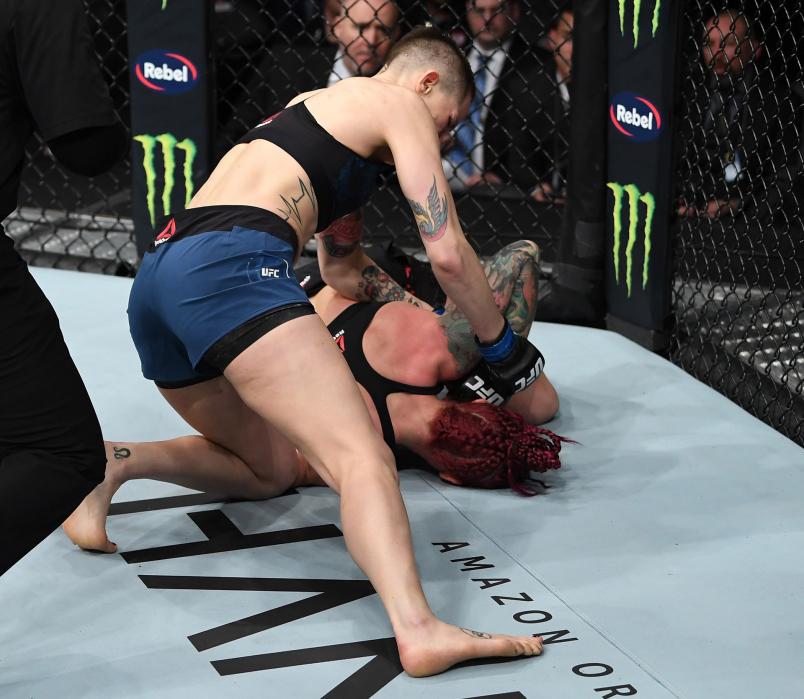 “My body’s acclimated really well to running and it’s become a part of my training now to where right when I got back home after this last fight, I went back into running,” said Chiasson, who faces Sarah Moras this Saturday in Ottawa. “So this camp has been a lot easier and less taxing on my body just because I’m so acquainted with running so many miles now.”

Thirty miles a week is no joke, though, and when you add in the day’s sessions with the killers at Fortis MMA, she had to have some days when she wondered how she took the path she was on.

“Every now and then I’m like, why am I doing this,” Chiasson laughs. “But it comes with being an athlete and wanting your body to be in the best shape possible, especially in this sport that requires you to be a certain weight. It’s not like I’m running six-minute miles. A lot of it is more of a cool down after a workout or a warm-up before a workout. And that’s the way I look at it.” 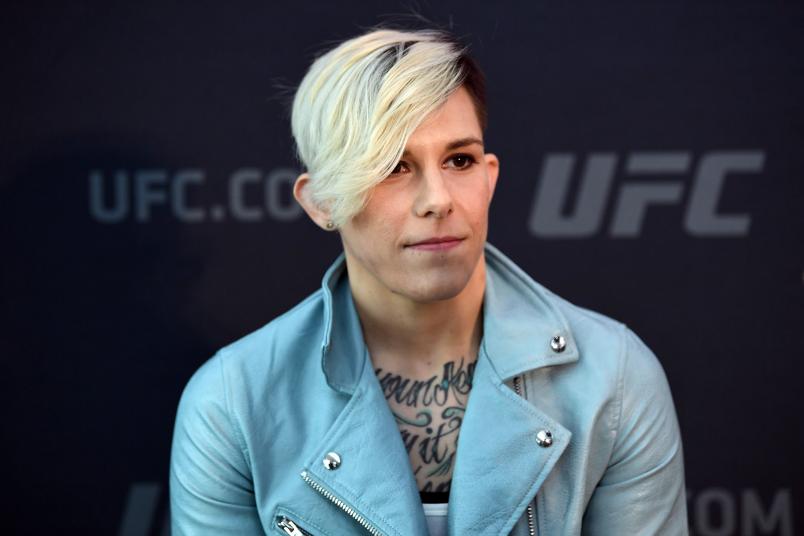 Macy Chiasson interacts with the media during the UFC 235 Ultimate Media Day at T-Mobile Arena on February 27, 2019 in Las Vegas, Nevada. (Photo by Jeff Bottari/Zuffa LLC)

Wait, it’s key to note that she also does most of those miles on a treadmill.

“It helps me manage my time a lot better,” she said.

It’s another reason why Chiasson is proving to be a unicorn in the MMA game. And let’s not forget that she took the Moras fight on short notice, meaning another cut to 135 pounds for the 5-foot-11 Louisiana native, whose whirlwind tour at the top of the sport is getting even crazier.

“It really is a whirlwind,” Chiasson said. “As soon as I got out of my last camp I was right back into another, but I think these hardships and these experiences are what make it worthwhile. Even though in the moment I’m like, ‘Gosh, I’m so tired of being in this gym, I’m so tired of doing this,’ I always tell myself, you know what, you’re gonna suffer right now and then look back and be so glad that you did that and be so glad that you went through these hardships because the position you’ll be in at that point in time and in that future moment – whether or not it’s a title fight or a fight in the top five - there’s gonna be those times when you look back and say, ‘I’m so glad I did that.’ That’s the way I look at it.”

So glory solves everything, then?