After Dropping Her UFC Debut, Cheyanne Buys Chose To Move Back Home To Vegas And Get Back To Her Roots Before UFC Fight Night: Hall vs Strickland
By E. Spencer Kyte, on Twitter @spencerkyte • Jul. 28, 2021

Cheyanne Buys is happy to be home.

After spending the last couple years living and training in Dallas, the aspiring UFC strawweight and her husband, fellow Dana White’s Contender Series graduate JP Buys, relocated to Las Vegas earlier this year, bringing the 26-year-old back to the city she calls home and the team that guided her throughout her amateur career and early professional experiences.

“Being 0-1 in the UFC, it really makes you think about your decisions a little bit,” began Buys, who takes on Gloria de Paula this weekend in a clash of Contender Series alums searching for their first UFC victory. “When I left Las Vegas, it was to be with my husband, so when we went to Texas for visa purposes, it was a change for both of us and it was never my home.

“Sayif was good to us and the team there is awesome; that’s why we stayed as long as we did,” she continued, referring to Sayif Saud, the head coach at Foris MMA where Buys and her husband trained prior to moving back to Nevada. “After my fight, I just knew I needed to go back to the coaches that made me, Dennis Davis and Ray Sefo. They’ve been nothing but good to me, and I left them for a man, so for me to come back to Vegas with my husband has been nothing but heartwarming for me.” 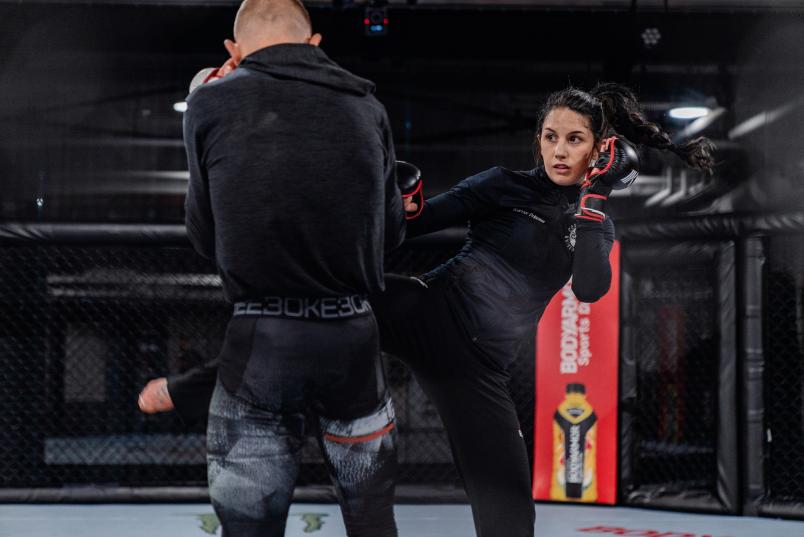 A fiery competitor inside the cage, Buys spoke about the move and everything that went into it with the same sharpness and clear passion that carried her to a 5-1 record prior to dropping her UFC debut to Montserrat Conejo in late March.

As someone that has lived in 14 different cities spanning three provinces and both coasts of my home and native land during my nearly 43 years, I fully understand feeling unsettled somewhere and yearning to find a place to plant your roots, establish a community, and give yourself every chance possible to flourish.

So while the UFC dreams for both members of the Buys family came to fruition while training at Fortis MMA and living in Dallas, trading one arid locale for another that offered a lot more of the things she was looking for made all the sense in the world to the no-nonsense strawweight.

“You’ve got to make yourself happy in life, so we got up and just left because we had to do what was best for us,” she added. “Being back in Vegas, having my old team, the UFC Performance Institute and all the staff there, I feel like a different fighter again. 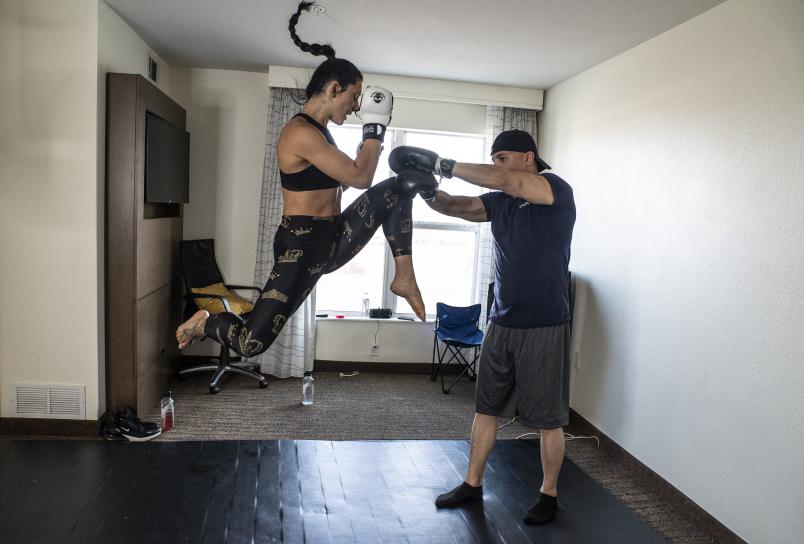 “I feel like I’m back to my old self. I’m happy here. I’m the healthiest I’ve been in a very long time and I’m very excited to make this walk.”

The other thing fueling Buys’ excitement is the fact that she’ll share the Octagon this weekend with a fighter who seems a little more likely to meet her head-on and mix things up a little; a far cry from what she experienced in his first sojourn into the UFC’s eight-sided structure earlier this year.

“I wasn’t even in a fight last time!” exclaimed Buys, still irritated by the approach Conejo deployed in their joint debuts, which the Mexican newcomer won by unanimous decision. “That chick just wanted to headlock and hold me; it was the most frustrating thing I’ve ever been in.”

Less than 20 seconds into her debut, Buys found herself clinched up against the fence after Conejo punched her way inside. Another 20 seconds later and she was down on the canvas, stuck in a head-and-arm choke position, trying to fend off the attacks of a much more seasoned, much savvier grappler.

She remained there for virtually the entire round, but when the second period began, Buys got loose with her hands, showcasing the striking that made her an intriguing addition to the 115-pound weight class and a solid favorite heading into her debut. 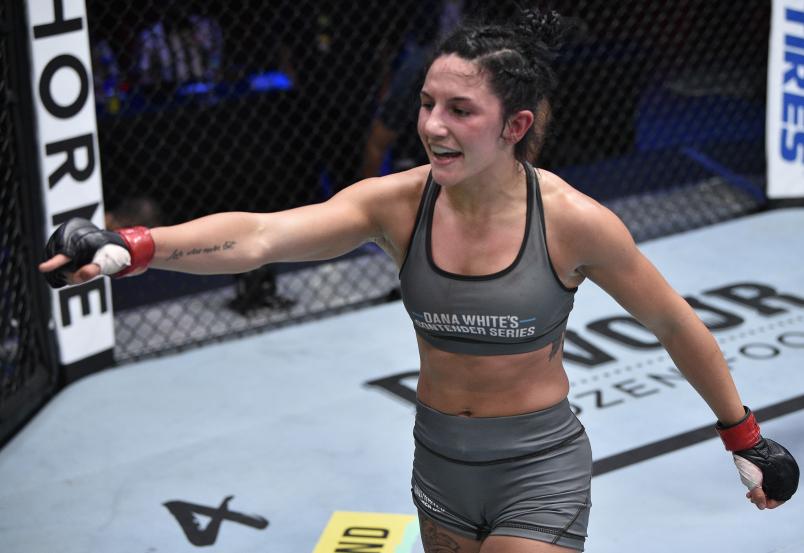 Unfortunately, she was back on the deck less than two minutes later, Conejo clamping down on the same headlock, grinding out the frame in that position, chipping away at Buys with short, annoying punches.

The third was much better, with Buys showcasing her striking and landing with force in the early stages, along with having some success scrambling on the ground after returning there midway through the frame. But Conejo ultimately reclaimed top position and grinded out the victory, the two getting into a heated exchange at the horn.

As annoyed as she was at the close of her debut, Buys sees that frustrating setback as a positive heading into her sophomore outing this weekend.

“I’m happy I lost my last fight because taking an “L” makes you humble, but it also makes you realize, ‘This next one, I’m not going 0-2 in the UFC,’” said Buys, who welcomes the opportunity to share the cage with someone more likely to strike with her on Saturday.

“I’m excited to get in there with someone that is going to want to throw down, not stall,” she said of de Paula, who landed on the wrong side of the scorecards in her debut opposite former Invicta FC atomweight champ — and Buys’ former Fortis MMA teammate — Jinh Yu Frey a week prior to Buys’ loss to Conejo. “It’s kill or be killed and I don’t plan on being killed. 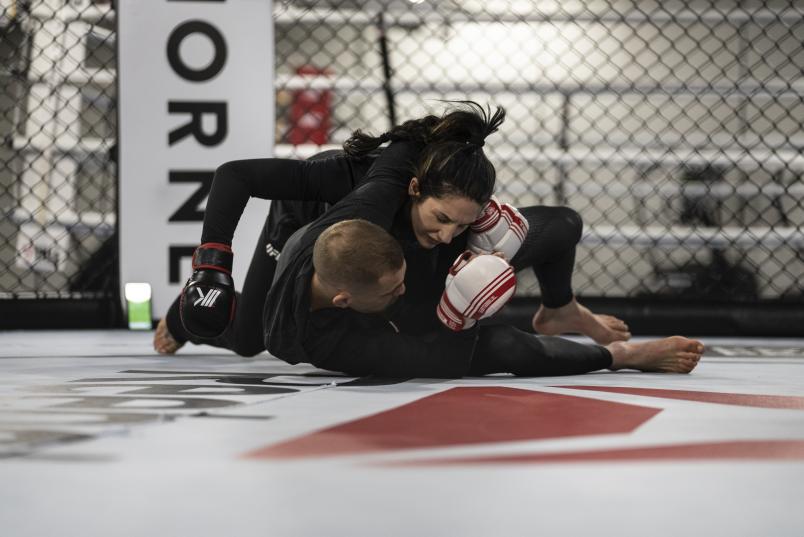 A little more than four months removed from her debut, a great deal has changed for Buys and she’s happier and healthier.

But odd as it may sound to some, a happy fighter is a dangerous fighter, and that’s why the Las Vegas resident believes things will be different this time around.

“Being happy makes a huge difference in your performance, and going into this fight, being as happy as I am, the shape that I’m in, being healthy, I feel like I’m going to be unstoppable.”