"I never took the UFC as a game. It’s a sporting competition, and I try to be on top all the time." - Cheick Kongo 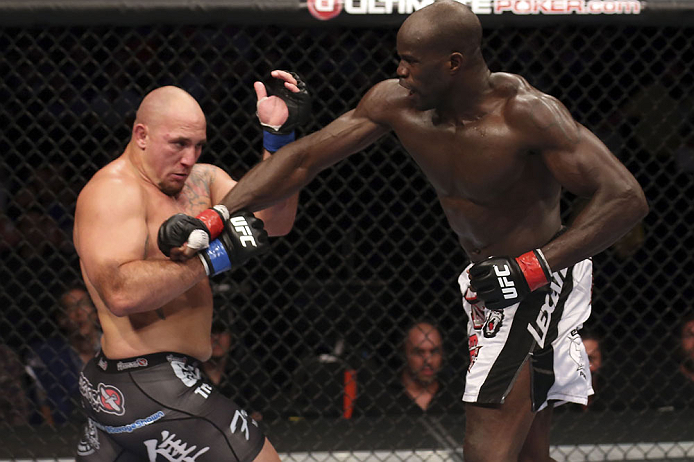 The UFC’s heavyweight division looked a lot different back in July of 2006, when Cheick Kongo made his debut in the organization with a first round stoppage of Gilbert Aldana.

Tim Sylvia was the champion, defending the title on that same UFC 61 card against Andrei Arlovski. Frank Mir was trying to come back from a near career-ending motorcycle accident and having a rough go of it, and as far as other marquee names, they were few and far between.

Nearly seven years later, Kongo and Mir are the last men standing from that era, an amazing feat in a sport with plenty of turnover. The 37-year-old Kongo, who returns to the Octagon on Saturday night to face Roy Nelson, is currently in second place on the all-time list for most UFC wins and most UFC knockouts in the heavyweight division. Pretty impressive, and you can count Nelson among the impressed, as he called his opponent “one of the greatest heavyweights to grace the UFC.”

“That’s really respectful and I appreciate that,” said Kongo when told of Nelson’s compliment. “That’s a gentleman. If you’re a true warrior, you respect all the athletes and you dedicate everything to be really good and successful in that sport.”

If anything, Kongo has always respected the sport. He never shows up out of shape, there’s no drama or controversy surrounding him, and as far as being an ambassador for the sport in his native France, there is none better. So what’s the secret of his longevity in the Octagon?

“Honestly, I don’t know,” he said. “I just try to do my best. I never took the UFC as a game. It’s a sporting competition, and I try to be on top all the time. I made mistakes six times (laughs), but I try my best to reach my dream as soon as possible.”

Those six times were his five losses and one draw. Yet outside of an upset defeat to Carmelo Marrero in 2006, all of Kongo’s defeats came against superstars of the game like Heath Herring, Cain Velasquez, Mir, and Mark Hunt. And those losses have been surrounded by 11 wins, a number made even more notable by the fact that he had to leave his country to find quality training and fights.

“It was pretty difficult because I had to leave everything,” said Paris’ Kongo of his formative years in the sport. “All my loved ones I left behind me to try my path outside of France and try to be better. But when I come back to my own country, I can bring more success, good motivation, and nice wins to other fighters to make them really strong and hopefully change all the rules in France about the sport.”

Saying that “everything is changing in the right way,” when it comes to MMA in France, part of Kongo’s aforementioned dream is to fight at home, but before that happens, there’s business to tend to, and in front of him at the moment is Nelson, who has become a popular knockout artist as of late. Said Kongo of his foe, “Outside of the cage he’s really cool and a really respectful guy. And inside the cage, that’s a beast.”

On paper, it’s an interesting clash, but only if an in form Kongo shows up. That Kongo was the one who was in one of the greatest back and forth scraps ever with Pat Barry in 2011, who stopped Antoni Hardonk in 2009, and who gave current heavyweight champion Cain Velasquez a few scares in their UFC 99 bout. That fighter is a legit threat to anyone in the division. But then there’s the other Kongo, the one who won snoozers over Matt Mitrione and Shawn Jordan, making no fans in the process.

But as 40 closes in and the division remains wide open enough that a spectacular win or two can put him right in the title picture, Kongo is expected to show the type of urgency and dynamic fight game that has epitomized his best efforts. And if that happens, he may be closer than ever to reaching another dream, or fighting for the UFC heavyweight championship.

Don’t tell him that though.

“I have no idea (where I stand) because most of the time when I see myself very close, I’m too far, and when I think I’m too far, I’m really close,” he laughs. “So I have no idea. My next challenge is going to be Roy Nelson, I just think about him and nothing else.”

That’s a veteran of nearly seven years in the UFC talking.