Checking In With Charles Jourdain

Take a moment to check-in with Charles Jourdain, the flashy UFC newcomer from Canada who earned his first UFC win last December.
By E. Spencer Kyte, on Twitter @SpencerKyte • Mar. 31, 2020

Charles Jourdain still lives in his parents’ basement, despite publicly earmarking a potential post-fight bonus following his win over Dooho Choi in mid-December as funds to help facilitate a move into a place of his own.

“I feel a little guilty because I asked (UFC President) Dana (White) for the bonus to move out of the basement and I didn’t, which is not okay,” he said with a laugh before explaining that his mother is actually the one who convinced him the timing wasn’t quite right.

Listening to the counsel of his family is nothing new for Jourdain, the former TKO two-division world champion who admitted he “cracked under pressure” in losing his promotional debut to Desmond Green in the lightweight’s hometown of Rochester, New York earlier in the year.

Following a back-and-forth opening stanza with Choi which saw the French-Canadian get put on roller skates for the first time in his career and each man score knockdowns that provided potential finishing opportunities, Jourdain returned to his corner, where his little brother Louis made things perfectly clear.

“My little brother told me, ‘Charles, you have 10 minutes to change your whole life’ and I thought, ‘Man, he’s f****** right,’” said Jourdain, who put away the local superstar late in the second frame with a combination similar to the one that felled Choi in the waning moments of the opening round.

“I caught him with the straight left and I felt him drop, and once he dropped, I was like, ‘Oh my God — I just knocked out Dooho Choi! Cub Swanson couldn’t even do that.’ The only guy who did was Jeremy Stephens, who, in my opinion, is one of the scariest knockout artists in the featherweight division, so now my name is out there too.” 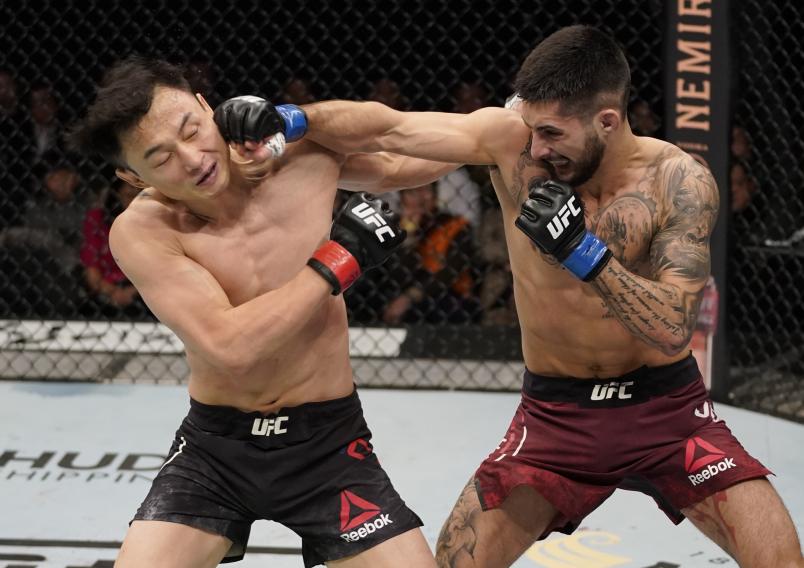 After enjoying home games throughout his run under the TKO banner, the native of Beloeil, Quebec has happily shifted from king to conqueror since joining the UFC roster, venturing into hostile territory for each of his first two trips into the Octagon.

Performing the way he did against Green in Rochester left a sour taste in Jourdain’s mouth — not because he lost, but because of how he performed in the opening two rounds — but it also prepared him for squaring off with “The Korean Superboy” in front of a partisan crowd in Busan and helped him steady himself during those dicey moments in the opening round.

“The most important thing for me was realizing that I wouldn’t crack under pressure like I did before,” he said, reflecting on the lessons he took away from the first of his back-to-back road games in the UFC. “My mistakes against Des weren’t technical; they were about pressure and being calm in a hostile situation.

“There were a lot of scary moments in that fight,” continued Jourdain, who has earned all 10 of his professional victories by stoppage. “At one point, he had my back and was punching me against the fence and I had a little moment where everything kind of paused for five seconds in my head and I had to recalibrate and say, ‘You’re 15 hours away from home, everybody is watching you — get up and if you’re going to get beat up, at least do it while daring greatly.’”

That’s exactly what he did, and now, the emerging Canadian is ready to begin testing himself against some of the more established names in the featherweight division.

Prior to asking for money to help with his eventual move, Jourdain wished injured veteran Cub Swanson a speedy recovery, acknowledging his desire to eventually share the cage with the perennial contender once he’s back to full health.

Once he returned home to Montreal, Jourdain spent a month locked away in his room playing video games and avoiding the new “old friends” who suddenly wanted to hang out and maybe hold a couple dollars for him following his breakthrough victory in December. After that, the promising upstart and his manager, Stephane Patry, sat down and compiled a list of veteran names they would be interested in fighting and submitted them to the UFC. 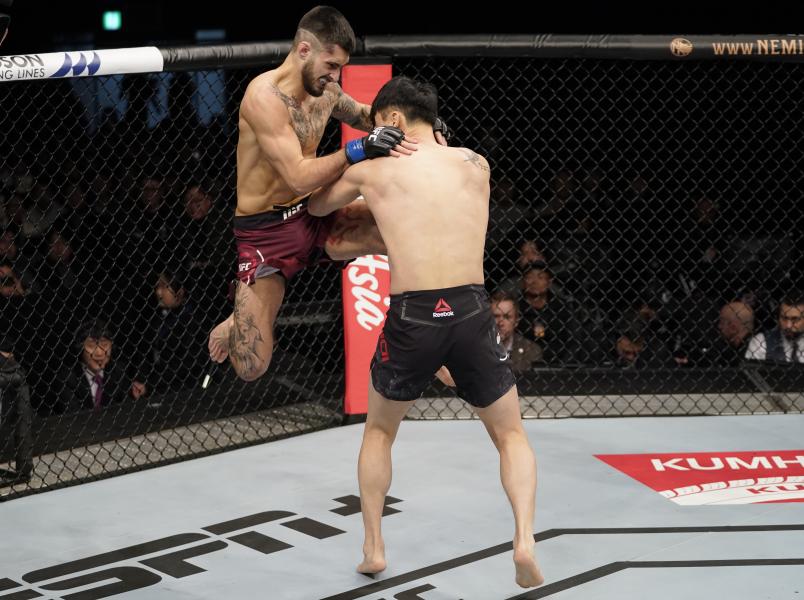 “What I don’t like about the 145ers right now is that all the guys outside of the Top 10, we’re all unknown,” said Jourdain, citing competitors like Shane Burgos and Calvin Kattar as examples while also shouting out recent winners Chase Hooper and Bryce Mitchell as fellow up-and-comers and potential future opponents.

“If I’m fighting a guy like Shane Burgos, I don’t think people will necessarily understand the gravity of the fight — the pressure and that he’s a straight-up killer,” he said of the New York native, who has gone 6-1 to start his UFC career and is coming off a third-round stoppage victory over Makwan Amirkhani at UFC 244 last November. “That’s why I’m aiming for a guy like Cub because he has a big name.

“When you’re fighting Cub or Darren Elkins — guys who have been in the UFC a little longer — those are the fights that interest me a little more because they have tons of experience and I want to fight people who are a bit more well known,” he continued, before acknowledging that he’s ready and willing to face whomever the UFC matchmakers determine is next in line for him.

“When we sent a list of guys we wanted to fight against, we asked for Edson Barboza, we asked for Kron Gracie, we asked for Cub, Darren Elkins — some guys who have big names. Everyone in the UFC is dangerous, so I’ll go for the one with the biggest name right now.”

At the present, the particulars of the French-Canadian prospect’s next fight have yet to be determined, but after finishing the highly regarded “Korean Superboy” and making good on his promise to get back to the exciting style that carried him to the UFC in the first place, chances are Jourdain is going to get another marquee assignment and another opportunity to show he’s the next potential superstar to emerge from “The Great White North.”

“For now, I don’t feel any pressure because I didn’t have that feeling yet — that I’m the next superstar,” said Jourdain. “I’m not that popular. I’m not that known. I don’t receive as much attention as I thought I would, but at the end of the day, I don’t mind because that’s not what I’m doing it for.

“At some point though, I want to be the next guy,” he added.

If he keeps performing like he did in South Korea, it will only be a matter of time until he takes up that mantle.

By then, expect to see him out of his parents’ basement.