UFC Jacksonville Heavyweight Feeling Blessed To Be Back
By Walker Van Wey, UFC FIGHT PASS • May. 13, 2020

The rise, fall and resurgence of heavyweight Chase Sherman came at an almost record setting pace. After being cut from the UFC roster in late 2018, Sherman went back to where it all started and got his career back on track.

Before his UFC debut in 2016, Sherman was wading through the world of regional MMA as a heavyweight. The road to nowhere took him all over the southern states before he finally found a home in Florida.

“It’s really hard to find regional heavyweights and Dean [Toole, CEO of Island Fights] always finds them,” Sherman explained. “They find me the fights I needed to get down there.”

Card after card of finding heavyweight fights for Island Fights powerhouse Dillon Cleckler made it easy for Toole to find people for Sherman, and before you know it, Sherman was 3-1 in Island Fights, 9-1 overall and the UFC was knocking on the door. Ready or not, Sherman was answering.

Sherman amassed seven fights in two years in the Octagon and while the Cerrone-like approach of high output and taking short notice fights is exactly what fans want to see, his 2-5 record in the Octagon had earned him a walk out the door. 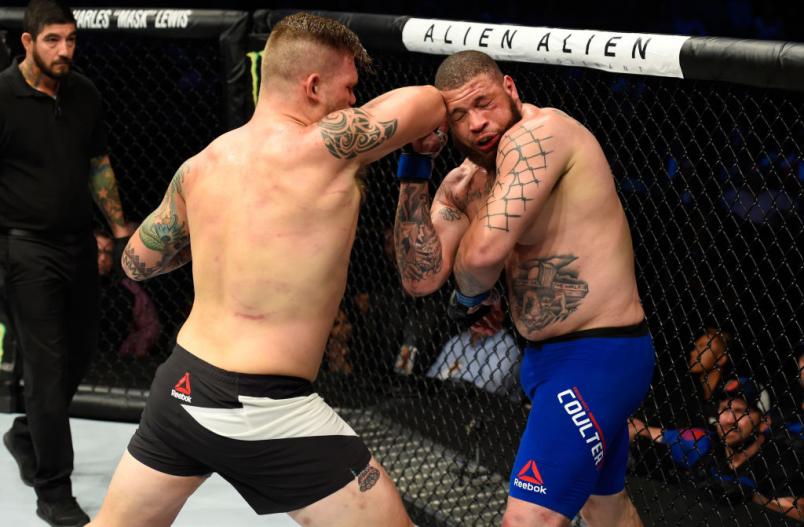 DALLAS, TX - MAY 13: (L-R) Chase Sherman elbows Rashad Coulter in their heavyweight fight during the UFC 211 event at the American Airlines Center on May 13, 2017 in Dallas, Texas. (Photo by Josh Hedges/Zuffa LLC/Zuffa LLC via Getty Images)

Chase Sherman elbows Rashad Coulter in their heavyweight fight during the UFC 211 event at the American Airlines Center on May 13, 2017 in Dallas, Texas. (Photo by Josh Hedges/Zuffa LLC)

“I was always honest with Chase and I told him before he went that I didn’t think he was ready,” Toole said. “Not because of skill level but there’s a lot of things that go into it maturity-wise and other. Chase was great but he was tagging Joe Silva on Twitter, ‘I’ll fight in two weeks. I want to fight the same card as my buddy.’ All the time. I think he took five or six of his fights on ten days or less notice in his last UFC stint.”

The lone fight that came with a training camp was his UFC 211 bout with Rashad Coulter. On a card that saw Joanna Jedrzejczyk, Eddie Alvarez, Stipe Miocic and many more, it was Sherman vs Coulter that took home Fight of the Night honors.

When Sherman failed to match the flash of his UFC 211 performance or the devastation of his 9-1 run before making it to The Show, the UFC and Sherman parted ways. One of the first people to get a phone call was Dean Toole of Island Fights.

“I told him, ‘Just get back on a card. We can’t pay you what the UFC can but we can get you active and give you the right people to fight,’” Toole recalls.

Less than three months later Sherman was in the Island Fights ring.

Out to prove he was the fighter he had always been, Sherman notched three straight first round stoppages in six months, including a monstrous leg kick TKO at Island Fights 56. The three-fight stint, a BKFC heavyweight title and a pandemic was all it would take before the UFC called “The Vanilla Gorilla” once more.

“This is huge,” Sherman said. “I wasn’t expecting a call at all. It came at the strangest of times. It’s a blessing for sure and I’m just so happy to be back.”

Although there will be more eyes on Sherman now than ever before when he faces Ike Villanueva tonight, there’s no longer a fear of being cut or a feeling of desperation to impress or win.

“Life goes on,” Sherman said. “I learned that after my first time. I thought fighting and being in the UFC was all I can do, and it put this enormous amount of pressure on me. I realized life goes on after that. If they cut me, they cut me and I’m in the same boat I was before.”

If Sherman were to fight out his four-fight contract or fall victim to the cut once again, he would always be welcome back at Island Fights, but Toole sees little odds of him underperforming.

“Every fight Chase is in is an absolute war but I think he’s going to do things a lot different this time,” Toole explained. “He’s going to actually do a fight camp every fight, prolong his career and take the right fights. No one talks about this guy’s leg kicks. They’re like a 2020 Mirko Cro Cop version of Chase Sherman. Some of his fights he never really used it. He used to say it took a lot of energy to be a heavyweight and throw leg kicks the way he does but that’s partially due to him taking his fights on short notice, so I think you’ll see a lot of that moving forward.”

Only time will tell what’s in store for Chase Sherman, but with a record of 6-1 in one of the strongest regional promotions in the world, a renewed confidence and patience and a new arsenal of weapons, it’s likely Sherman will be around for a while this time.

Tune in to UFC Jacksonville LIVE Wednesday, May 13! Sherman kicks off the Prelims at 5 pm CST!