After suffering his first career loss, Chase Hooper will enter the Octagon at UFC 256 with the intention on proving to himself that he belongs in the UFC.
By Gavin Porter, On Twitter @PorterUFCNews • Dec. 10, 2020

Chase Hooper has been growing up right before our eyes.

The first time he came onto the UFC’s radar was during his impressive win on season two of Dana White’s Contender Series. At just 18 years old, “The Dream” caught Dana White’s attention and was awarded a developmental contract.

That meant that Hooper received UFC support while still gaining experience on the regional scene and after getting four more fights under his belt, Hooper made his UFC debut on the UFC 245 card in December 2019. That week, Hooper had his “Welcome to the UFC” moment.

“The coolest thing for me was literally one of those welcome to the UFC moments. It was the ceremonial weigh-ins at UFC 245 and Dana White shook my hand and said, “Hey, welcome to the big show, kid” and it was like ‘Yeah, that’s what I’m doing right now,’” Hooper told UFC.com. “Then the famous locker room speeches where he motivates you to put on a good show. It was definitely the coolest moment of my career so far.”

White’s speech must hit home because Hooper would go on to defeat Daniel Teymur by TKO in the first round. The win solidified that Hooper wasn’t just a feel-good story and that he deserved to be competing at MMA’s highest level.

Up next for Hooper was a showdown with featherweight veteran Alex Caceres at UFC 250 in June, and while the bout didn’t go Hooper’s way, he showed true toughness in the fight and maturity beyond his years after the fight.

“The last fight was a huge learning experience for me. I keep saying it because it’s like a crazy statistic; he had more fights in the UFC than I had years that I had been alive at that point. So just coming up against someone with that much of a step-up experience-wise was a huge challenge,” said Hooper. “I’ve always jumped up to the challenge and he just kind of highlighted the areas that I need to work on in the future, which I obviously knew, but it’s so much easier to kind of just keep doing the same stuff when you’re winning, but having a loss put the chip back on my shoulder. It gave me the motivation to step up the wresting and step up the striking and just kind of make everything flow together even better.

“I think my UFC experience has kind of made me understand what the process is, but I know I still have so far to go as a fighter,” he continues. “Being 21 years old right now, I know I’m not going to hit my physical prime for another eight to ten years, so my body is getting better and better with each fight and with all that experience. I’m still growing, so who knows which weight class I’m going to end up in. It’s just keeping that mentality of trying to get better every time.” 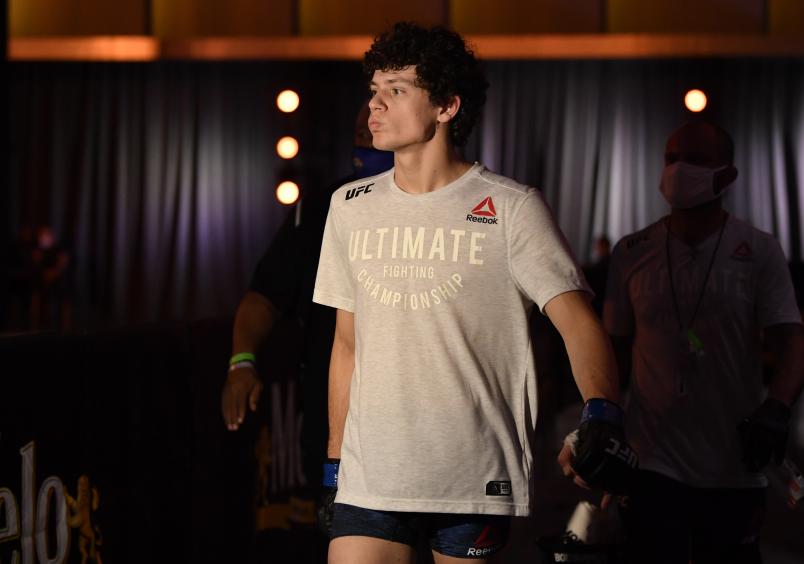 Chase Hooper prepares to fight Alex Caceres in their featherweight bout during the UFC 250 event at UFC APEX on June 06, 2020 in Las Vegas, Nevada. (Photo by Jeff Bottari/Zuffa LLC)

Part of Hooper’s evolution has been getting experience in the gym and in the Octagon, as well as becoming more comfortable with the process. Hooper will face his next test this weekend against Peter Barrett at UFC 256, notching his third UFC appearance in under a year.

Hooper had been looking for the opportunity to bounce back after his first career loss and he views the showdown with Barrett as a chance to prove something to himself.

“I just want to show myself that I deserve to be at this high of a level,” said Hooper. “I would also like to show some high-level grappling and show people that I’m improving and that I have a lot of potential to stay in this sport for a long time.”