The “Teenage Dream” is over. Long live “The Dream.”

“We’re retiring that nickname,” said the newly-minted 20-year-old of his former moniker. “We decided that ‘The Teenage Dream’ gets pretty crazy when you’re in your 20s, so we’re going with ‘The Dream.’ I think Urijah (Faber) is the only one that can keep ‘Kid’ in the name.”

“The California Kid” remains eternally young, but by no means is Washington State’s Hooper an old grizzled veteran now that he’s exited his teen years. In fact, as he approaches his UFC debut on December 14 against Daniel Teymur, the emotions are the same as they’ve ever been before a fight.

“It’s just as stressful as all the other ones,” he chuckles. “It’s a different type of stress. I feel like before it was more trying to get to the UFC, and now that I’m here, it’s more the stress of trying to put on a good performance and trying to show that I belong here. It comes in waves of freaking out and then doing good when I stop thinking about it.”

You can’t blame Hooper for feeling this way. He is making his UFC debut before the age of 21 and he’s doing it on the biggest card of the year in Las Vegas. That’s a pretty wild idea for most 20-year-olds.

“I think about that every now and again,” he said. “For most people my age, the most stressful part of their day or their every couple months is taking a final for a class or working their part-time job while I’m here living a pretty boring life up until I step in a cage and some other guy tries to hurt me as much as he can in 15 minutes.”

“The rest of it is pretty boring.”

There is peace in that routine, though, and the reality that all that work and repetition is to show up on one night and deliver the goods for 15 minutes or less. Yeah, it’s stressful, but it can be glorious as well. And despite his youth, Hooper appreciates that. He also loves the competition.

“I think at this point I’m pretty deep in here and there’s no going back,” he said. “I’m seeing how far I can take it, and I’m a competitive guy. I like to see how I stack up against other people. I’m sure everybody will walk past a guy on the street and be like, ‘I wonder if I can beat that dude up.’ And I want to take that to the extreme and be like, ‘That jacked dude over there that’s been preparing for three months, I wonder if I can beat him up.’” 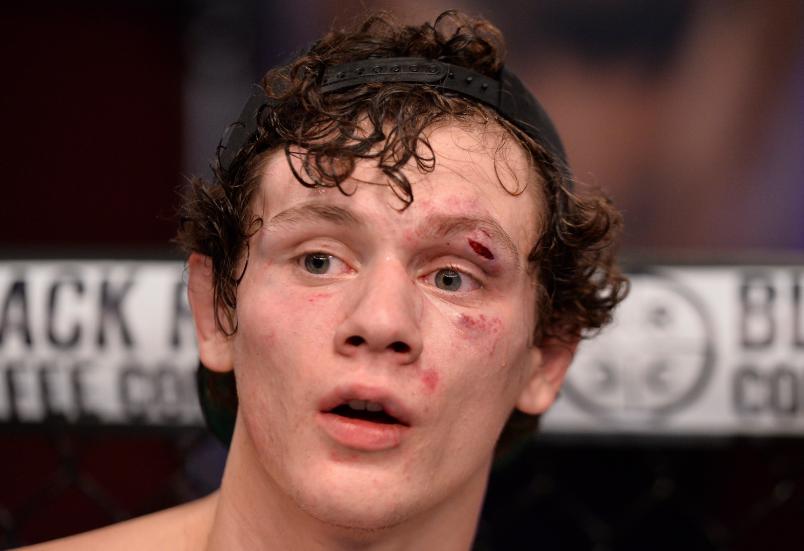 Enumclaw must be a tough town. Hooper laughs.

“I don’t know, I’m sure everybody thinks that in the back of their head just a little bit.”

That kind of competitive attitude is born, not made, and Hooper obviously has it. And with an unbeaten 8-0-1 record, he’s proved that he’s ready for the next level in his career. If that record sounds different from the one he had after defeating Canaan Kawaihae on season two of Dana White’s Contender Series in July 2018, it’s because he’s since added two wins and a draw to his slate, gaining valuable experience not just as a developing pro, but as one with a target on him thanks to the acclaim he received through the DWCS.

“I think the wait between Contender and making it to the UFC was necessary,” said Hooper. “It definitely would have been cool to go right from Contender to jumping on a UFC card, but the fights that I had with UFC FIGHT PASS got me used to more media stuff. Before, I had never really done any interviews, so getting to do that and getting to travel across the country and having to cut weight and fight definitely helped me get ready. And it gave me the extra time to work on my skill set fighting-wise.”

As for that target…

“It stepped up the level of competition, which I liked, and there was always a target on my head,” he continues. “After Contender I had all these people calling me out and trying to fight me, and the people that do fight me, it’s more of a benefit for them to beat me than for me to beat them. But I perform well under stress, and that added level doesn’t bother me too much.”

Less than a month from now, Chase Hooper will make his first Octagon appearance against a gritty competitor who smashed his way into the UFC win column for the first time in June and who is hungry for more. Hooper knows what he’s up against and his honesty about the fight game shows that he’s ready for it all. And on a UFC 245 card already stacked with three title bouts, seeing him make that move is another good reason to tune in.

“It’s cool being able to make it to this level at such a young age,” Hooper said. “I think a lot of people would like to be in my position because they don’t see all the work and stuff that went into it. All the hard days when you’re like, ‘I don’t even know how to fight, I should just quit; there’s no way I can stack up with these guys.’ Then there are all the good days where you feel like you’re on top of the world and you’re like, ‘I could take on Jon Jones right now.’ It’s doing the same thing six to eight hours a day, five to six days a week and it’s definitely not what other people think it is. But the routine takes all the stress out of my life.”