"I get to do the fun part without having to go through the hard part of a training camp again. I think it’s kind of a win-win situation for me." - Chas Skelly 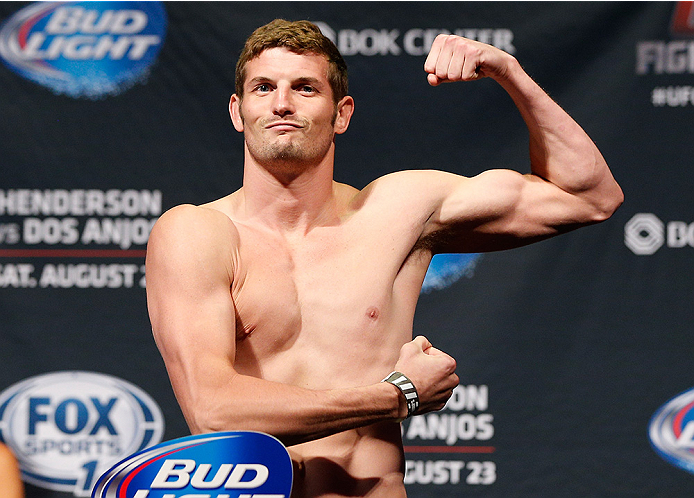 No fighter on the UFC roster steps into the Octagon as frequently as Donald Cerrone. In the three-and-a-half years since he transitioned from the WEC, the Albuquerque-based lightweight has competed 14 times, with a 15th bout on the books for later this month.

It’s gotten to the point that whenever an opening appears on a card, Cerrone’s name pops up as a potential replacement, regardless of weight class. As tongue-in-cheek as some of his offers and mentions might be, the surging contender is the one guy in the sport that truly embraces the “Anyone, Anywhere, Anytime” mindset.

But not even the hyper-active (and hyperactive) Cerrone has jumped into the Octagon twice in two weeks, something Team Takedown featherweight Chas Skelly is poised to do when he faces off with Sean Soriano in the opening bout of Friday’s UFC Fight Night event at Foxwoods Resort Casino in Ledyard, Connecticut.

After earning a first-round submission win over Tom Niinimaki on August 23, Skelly got the call to fill in for an injured Andre Fili against Soriano 13 days later, and jumped at the opportunity to make the quick turnaround.

“I need to get on the ‘Cowboy’ Cerrone Bonus Plan,” joked Skelly when asked if he was trying to follow in the footsteps of the surging 155-pound contender. “My weight is still down and I still feel good from the fight, so it wasn’t really a decision. They called and I said, `For sure.’ Plus, it never hurts to be a company man every now and again either.

“It never hurts to get two paychecks in a row and I’m already in shape,” continued the 29-year-old, who carries as 12-1 record into Friday’s contest. “I had a quick victory, didn’t take any damage, so I might as well. I get to do the fun part without having to go through the hard part of a training camp again. I think it’s kind of a win-win situation for me.”

With more than 60 fighters crossing the threshold into the Octagon every month, standing out in the crowd is becoming an increasingly difficult task, especially for fighters competing on the preliminary portion of an event. The hectic pace of the UFC schedule keeps the majority of the pre-fight press coverage focused on the main card competitors, leaving emerging talents trying to work their way up the ranks to fend for themselves, hopeful that a strong performance will put them in the spotlight, if only for a passing minute or two.

Those challenges are even greater for those fighters competing at lightweight or featherweight – the deepest, most competitive divisions in the company, where it seems like someone new is turning in an eye-opening performance each and every weekend.

That’s what Skelly is up against, and “The Scrapper” admitted that making an impression is part of the reason he wasted no time accepting the UFC’s offer to return to action so quickly.

“Tom Niinimaki’s a tough guy – he’s not a bad fighter – but I knew it was a good matchup for me.  I saw the fight going pretty much exactly the way it went. Obviously you don’t count on that quick a finish, but I did see the fight going that way – me pressuring him, being able to take the fight where I wanted and finishing him.

“If I can do the same thing again, twice in a row, that might get me even more of a chance to get a bonus. If I can put on another dominant performance, it might put me up there in the rankings a little bit and (help me) start working my way up because that’s what I really want. I’m doing this to try to be the best and I think this guy is another really good matchup for me.”

As part of Team Takedown, Skelly gets to see first-hand what it takes to be the best, training alongside UFC welterweight champion Johny Hendricks on a daily basis.

“I think success breeds success. They say ‘iron sharpens iron’ and all that BS, but honestly, when you’re around successful people and in a successful program where things are going real well, (you see) there is a formula for success that is working in your favor.

“Jared (Rosholt) is 3-0 as a heavyweight now (in the UFC), working his way up and Johny is welterweight champion,” continued Skelly. “So watching Johny get bigger and bigger fights until he got to the title, I got to watch that progression. When you see that and you see that success, you want that for yourself and you think `obviously we have a program here that’s working.’ It gives you more confidence in what you’re doing and what’s going on around you. You get to watch it and it’s not just happening to you; it’s happening to you and other people.”

And he’ll look to carry that confidence with him into the cage when Friday night when he faces off with Soriano and looks to pick up his second victory over a member of The Blackzilians in the span of two weeks.

“It’s funny because Kenny Monday is coaching with us now, so I’ve been giving him a hard time about trying to sic his old team on me,” Skelly laughed of facing consecutive opponents from the team Monday coached until earlier this spring.

“I’m really confident that I can come out and get another quick victory. I actually could see this fight going basically the same way the last fight went. I just think stylistically it’s a great matchup for me.”

And once this bout is in the books, the featherweight hopeful will be happy to jump back into the fray whenever the UFC needs him.

“As long as I’m healthy, I don’t care. I’m trying to stay busy and keep collecting paychecks, so they can pencil me in whenever.”