Chas Skelly: Back in the Saddle 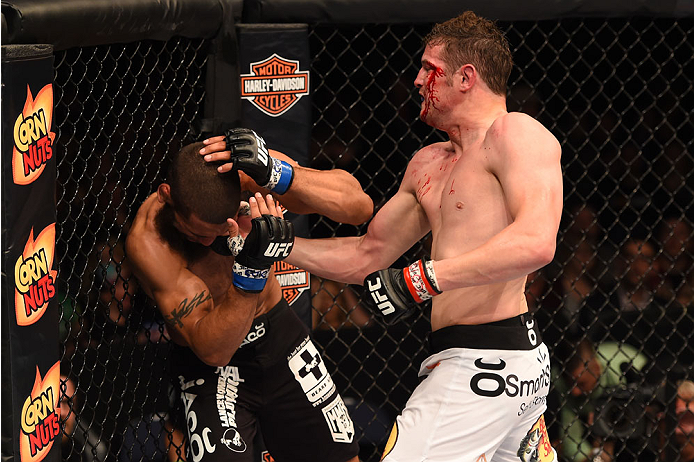 Momentum in sports is both real and magical – something that you can see and feel, but sometimes can’t explain how or why it works.

Look at the recently completed Major League Baseball playoffs, where games and series were shifted by single plays that swung momentum to the other side of the diamond. A wonky bounce here, a Texas Leaguer that falls in there and beleaguered teams get emboldened by getting the hit they needed, while the opposition starts over-thinking routine plays until the game, and perhaps even the series, slips away.

There is even a term in the NBA now for when guys want to see if they’ve really got momentum rolling with them – the heat check. Steph Curry hits a runner, makes a jumper coming off a screen and the next time down, he pulls up from 27 feet. Heat check. Splash. To quote the classic arcade game NBA Jam – “He’s on fire!”

Fighting is no different.

When competitors win a couple fights, get a couple stoppages, all they want to do is get back in the gym, stay in shape and return to the cage as quickly as humanly possible. Things are clicking – their conditioning is on point, they’re sticking the jab and the way they’re feeling, no one can slow them down. They’ve got momentum on their side and the worst thing that could possibly happen is that they have to shut things down for longer than expected, bringing everything to a screeching halt.

That’s where Chas Skelly is at right now.

After suffering the first and only defeat of his professional career in his UFC debut, the 30-year-old Texan picked up back-to-back victories two weeks apart last fall, submitting Tom Niinimaki in Tulsa before rolling up to Connecticut to score a decision win over Sean Soriano 13 days later. Five months later, “The Scrapper” stepped back into the Octagon and collected his third consecutive victory – a second round stoppage win over fellow emerging featherweight Jim Alers that had him on the cusp of breaking into the lower third of the rankings.

He had momentum and was making progress on his climb up the divisional ladder. This weekend, Skelly returns for the first time since that win over Alers, making the trip to Sao Paulo, Brazil to square off with Kevin Souza in one of the many underrated pairings on Saturday’s UFC Fight Night: Belfort vs. Henderson preliminary card.

“You get that momentum built up and you always want to keep it rolling; stay healthy, stay in the gym and keep racking up wins,” the Team Takedown product admitted when asked about the frustrations of being out of action for the last nine months. “They signed me for a fight in June and I got a real bad staph infection in my arm, got put in the hospital, so I ended up having to withdraw from that. After that, though, I was still in shape and ready, so it is frustrating being on the shelf – just sitting and waiting.”

While he could kick up a fuss and complain, Skelly opts instead to take the “glass half full” approach to how he spent that time, finding the silver lining in being sidelined.

“It’s never bad to sit back and work on the things you need to improve, so I can’t complain too much.”

When this weekend’s date first came up, Skelly expected to get paired up with Nova Uniao product Hacran Dias, the man he was scheduled to face in June before being forced to withdraw. The Brazilian extended his win streak to two with a win over Skelly’s replacement, Levan Makashvili, and with Saturday’s event taking place in Sao Paulo, lining the two up again just seemed to make sense to the Fort Worth resident.

But with Dias unavailable, Skelly was offered Souza instead and accepted the fight without hesitation, in part because he was champing at the bit to get back into the Octagon, but also in order to cross another item off his Bucket List.

“I said ‘Yeah’ before I had even looked him up,” Skelly laughed. “I was looking towards fighting Hacran Dias – I thought they were going to match me up with him again – and they said, ‘Hacran can’t fight on that card, but we have this guy and if you want to fight on that card, you can fight this guy’ and I said, ‘Definitely!’ because I want a fight. Plus, I’ve always wanted to fight in Brazil and I’ve always wanted to fight in Japan and now I get to mark this one off the Bucket List.”

Despite carrying a 10-fight winning streak into Saturday’s meeting with Skelly, the former Jungle Fights champion Souza hasn’t been able to really make a run of things since arriving in the UFC three fights ago, as injuries limited him to a single fight in 2014 and just one outing earlier this year as well.

Entering off back-to-back bouts that earned him a bonus and bolstered by what is sure to be a partisan crowd inside Ginasio do Ibirapuera on Saturday night, Souza will surely be looking to make a statement and get his momentum rolling once again, but Skelly has other plans.