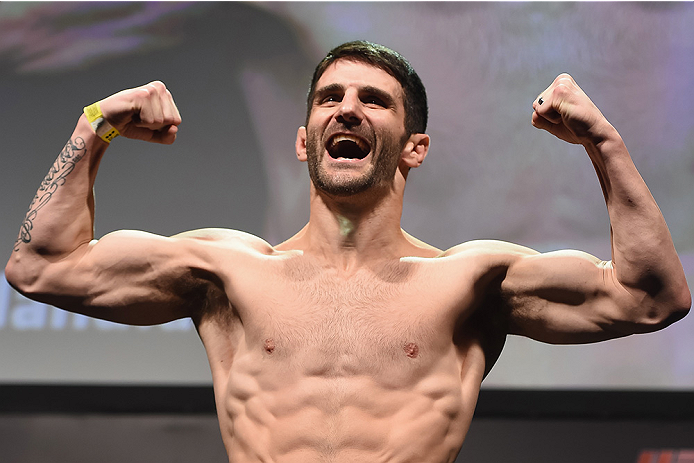 The first thing you notice on Charlie Brenneman these days is that the locks of hair that were his trademark are gone, replaced by a shorter look that could actually make you pass by him on the street without noticing him if you weren’t watching closely.

Other than that, when you talk to the UFC lightweight it’s still the same ol’ “Spaniard.” He hasn’t thrown his life into upheaval after back-to-back losses to Beneil Dariush and Danny Castillo, he isn’t growling at folks asking the 33-year-old about retirement, and he isn’t trying to reinvent the wheel heading into tonight’s must win outing against Leandro Silva.

That’s not to say there weren’t some adjustments to be made following his knockout loss to Castillo at UFC 172 in April. And it started with the hair.

“After my last fight, it was a pretty big deal getting knocked out like that,” he said. “I thought 'okay, what am I doing, where am I going with this career?' It changed my perspective on a lot of things and kind of made me think differently. I was ready for a fresh start and a new outlook on life in general and especially fighting. My wife always likes my hair short, so one day I woke up and said let's go get my hair cut.”

“Just like that,” he laughs. “I had cut my hair a couple times over the years and it was always a big deal. Now I look at it and I look at those clips from my last fight and I just think 'man, why did I have long hair?' I feel so much better in general with short hair.”

To those who crave long hair of the kind Brenneman used to sport, that’s sounds like a traumatic move. To him, it wasn’t, though it was also a symbol of a new beginning in a career he didn’t know if he was going to continue. When you’re young, reckless and seemingly invincible, a couple losses here and there are just bumps in the road. At 33 with a wife and daughter, you look at setbacks a bit differently, especially when they’re of the knockout variety.

“Yes, there was that obvious doubt, but for me personally, the way I've gotten over it is that you know it can happen, it happened, I lived through it, it was a rough time, and I got through it,” Brenneman said. “And back to the old cliché that what doesn't kill you makes you stronger, it did make me think about my health more and that's something that I never really considered until that happened. But then from that I turned it into ‘I can never let that happen again, and I'm gonna do everything I can to not let that happen again.’ And the way that it becomes not the focal point of my fighting future is by surrounding myself with as much positive energy and positive flow in getting myself better than I've ever been and controlling all of those things so that when I'm walking to the Octagon November 8th, I'm thinking about all the positive things I've done since April 26th that have put me to this point, and I'm not centering on what happened April 26th.”

Once that doubt was out of the way, Brenneman began to look more objectively at where he was at in his career. It was then that he made the biggest decision of all.

“It took me a long time to think about where I wanted to go with my career. Then I made up my mind that unless I get better, I don't want to fight again. So unless I notice a difference in me, unless I feel something inside of me that's different, I'm not going to go out and do this anymore. So I did a lot of soul-searching the last six months and the fact that I'm fighting is evidence that I am ready and I have gotten better.”

The mental part is always a major factor in decisions like this, but in Brenneman’s case, he also needed to add some new wrinkles to his game, and in the form of the Stay Fly Muay Thai team, he found them.

“I linked up with a new striking coach (Justin Greskiewicz) after my last fight,” he said. “All my striking coaches in the past have been tremendous and I've got along with everyone and it's been a great several years, but he just gave me a fresh new look and I was able to work with him four or five times a week for the last six months, which was consistency that I never had. And then I realized that consistency equals confidence. So I took a couple steps back and ended up several steps forward.”

Tonight, there’s no better place to test his confidence and new techniques than in the shark tank of Brazil against a Brazilian. Fighting there is no place for the timid, and Brenneman not only knows it, but he’s embracing it.

“I grew up on Rocky, I love Rocky, if I have a son, my son's name is gonna be Rocky,” he laughs. “It's like fighting the Russian in Russia. How many people get to go somewhere and, whether or not it's the right reason, be the villain and have all these things against you and be able to, in my eyes, come out victorious? That's an opportunity and challenge that not many people get, and I'm so unbelievably excited for it.”

But will he make the famous Rocky Balboa speech in the Octagon if he wins?

“I do speak Spanish, so the fans will probably understand it, and trust me, I've said it enough times to myself in my living room that I know it.”

It’s a moment of levity in a serious sport, but the fact that Brenneman hasn’t lost his sense of humor is a good sign. He’s loose, he’s prepared, and he wants to fight. He knows what’s on the line, but he’s made that walk before and he’ll do it again tonight. In short, the fighter is still there.

“One million percent,” he said. “There's not a morning I wake up at 6 o'clock to take the train over to Philly that I don't thank God that this is what I'm doing. In response to retirement or where my career's going, my answer to that is that my wife and I have a very open line of discussion in regard to my career and right now I'm taking it day by day. But I'm having more fun today than I've ever had.”