"This is a fight where I want to make a statement. I want to go in there and I want to finish him." - Charlie Brenneman 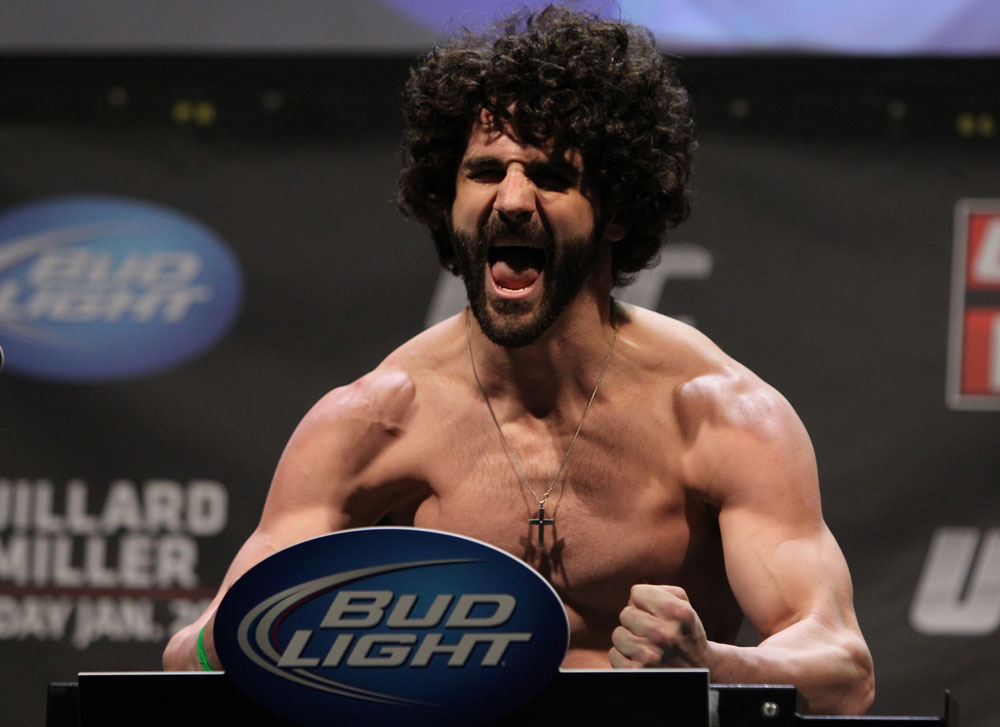 With one look at Erick Silva’s first two UFC performances, it’s safe to say that the Brazilian is a pretty scary customer. A 40 second blitz of Luis Ramos last August, followed by a 29 second DQ loss to Carlo Prater that was heading in the TKO direction will do that for your reputation.

But Silva’s third Octagon foe, Charlie Brenneman, isn’t exactly shaking in his boots as he awaits their UFC on FX co-main event on Friday. Fighting monsters like Anthony Johnson, Johny Hendricks, and Rick Story will do that for YOUR reputation AND psyche.

“It’s kind of an ongoing joke I say to my wife – you never have to be scared of anything because I fought the biggest, baddest man in the game and that was Anthony Johnson,” laughed Brenneman. “To be honest, preparing yourself to fight Anthony Johnson was probably the toughest mental thing I’ll have to do as a fighter, and I did that fine. Erick Silva doesn’t scare me compared to those other monsters.”

If you recall, former UFC standout Johnson was a vicious knockout artist who also had some well-documented issues with the scale. So it may be safe to say that by the time Brenneman stepped into the cage with “Rumble” in October of last year, Johnson could have had 20 pounds on him, making the finish at 2:49 of the first round not much of a surprise, as the difference in size and strength was apparent from the time the bell rang. Brenneman rebounded in style though, winning a clear-cut three round unanimous decision over Daniel Roberts in January that lifted his UFC record to 4-2 (15-3 overall). Next up is Silva, but the focus of “The Spaniard” isn’t on the former Jungle Fight champion, but on his own progression as a fighter.

“I don’t look at the guys so much,” said Brenneman. “Everyone talks about how much tape you watch and about strategy, and I look at myself. When I’m running in the morning I think about how hard I can push and I’m thinking about what I need to do to reach that wall, to reach that red zone, and keep on going. I put a lot of pressure on myself as compared to whom I’m fighting.”

If anything, there’s even more pressure on Brenneman these days, as he’s no longer just fighting for himself. On May 12th, he and his girlfriend Amanda tied the knot, and now he’s got a family to think about every time he steps into the Octagon.

“I imagine when I have a kid it will be even more, but it becomes a lot more real now,” said Brenneman, who was back in the gym two days after his wedding. “I realize that it’s not just me. I have people who are depending on me and I have a family and more ‘grown up’ responsibilities. So it puts a lot more emphasis on winning for me.”

Brenneman has always had that mentality though, even wondering if a bad performance or loss will lead to a trip out of the UFC. That’s kind of hard to believe, considering his record, his success thus far, and especially his accepting a fight with Story (which he won) on weigh in day.

“I wish I truly believed it was not true, but with the competition level and some of the decisions that have been made in the past, that’s always something that – to me – is real,” he explains. “And that’s something I live with.”

That’s probably one way to keep your competitive edge. Is that what keeps Brenneman sharp?

“On fight night, it’s the last thing on my mind,” he said. “But when it does pop into my head is on a Sunday morning when I have to leave my wife at seven in the morning to drive back over to Jersey. Those are the times that I remind myself – and her as well – that hey, I have to do this because this is just one little step in the hundreds and hundreds of steps that make me essentially keep my job.”

And one of the thousands of mental battles that play out in the heads of fighters around the world. When you ask anyone how much of this sport is mental, the estimates go from 50 percent all the way up to 90. Any way you cut it, that’s a lot of draining work to be done in the time when you’re not sharpening your physical tools. So any edge you can get is welcome. And for the 31-year old Brenneman, one of the advantages he hopes to have is the home field one, since this will be Silva’s first fight outside of his native Brazil.

“In the back of my head, it’s a variable that could greatly play into my favor, and in my mind it definitely won’t play against me in any way,” he said. “There is a chance that he could swoop right in there and won’t miss a beat. But at the same time, if I sense that it could be playing a role, that’s just gonna make me push even harder and harder to get him to that wall and break him.”

Breaking an opponent is the ultimate goal for a wrestler, and Brenneman had plenty of practice doing that as an alumnus of the Division I Lock Haven University team. Now in MMA, he’s had his ups and downs, but come Friday night, it’s statement time.

“It’s a rollercoaster, the UFC and my career especially,” he said. “After I beat Story, I was the next great Rocky story, and then I lost to Johnson and I was nothing more than a guy who got lucky. But I look at this fight as similar to Story. I think Erick Silva is comparable to Story, I think his hype might be a little less, but this is a fight where I want to make a statement. I want to go in there and I want to finish him, and I want to look to the bosses and say that’s who I am, that’s what I can do. I don’t care who’s next, just give me someone who’s a bit higher than I am.”

Then he and Amanda can have their honeymoon.