Faced With The Highs And Lows Of Wins, Losses, And Recovery From Injury, Charles Rosa Is Ready To Move On To His Path Toward Greatness
By Thomas Gerbasi, on Twitter @TGerbasi • Jun. 24, 2021

When it comes to his fighting career, Charles Rosa has seen a lot worse than a few losses here and there. Losses are part of the game; being told that he might never fight again after a neck injury wasn’t what he signed up for.

And he wasn’t about to go out like that, even when his training partners at the time weren’t some of the best fighters in South Florida, but a pair of senior citizens.

“There were definitely days that were tough when I would be in physical therapy and I looked to the left of me and the right of me, and there were these two 80-year-old ladies talking to me,” Rosa recalled. “I'm on an arm bike and I'm like, ‘Where the f**k am I right now?’” 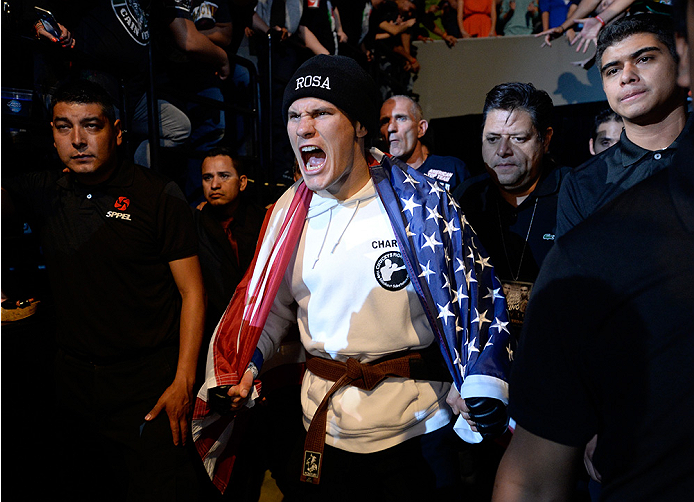 MEXICO CITY, MEXICO - JUNE 13: Charles Rosa of the United States prepares to enter the Octagon before facing Yair Rodriguez of Mexico in their featherweight bout during the UFC 188 event at the Arena Ciudad de Mexico on June 13, 2015 in Mexico City, Mexico. (Photo by Jeff Bottari/Zuffa LLC)

He can laugh about it now, but back in 2017-2019, as he battled back from that injury, it was no joking matter, especially with no guarantees that he would step into the Octagon again. But Rosa has always been cut from a different cloth than most and has been since the day he was born. So is it safe to say that the sun, sand, and surf of Florida hasn’t taken the Boston out of him?

“You already know,” Rosa said. “The Boston guy never goes anywhere. That's how I was raised. It's like when you find an apple tree. No matter where you bring the tree, it's still an apple tree. (Laughs) So it's always in me. That's what made me who I am.”

It was evident from the time he arrived in Florida and accidentally found the American Top Team gym and subsequently found a new love for a sport that would become his career. Back then, he had little more than the clothes on his back and a bike he bought to get around. For longer trips, he’d buy a bus pass, but for trips to the grocery store, it was the bike and a backpack to bring his groceries home.

“It was basically eggs and white bread, and my dessert was buying orange juice,” he said. “That's how it started.” 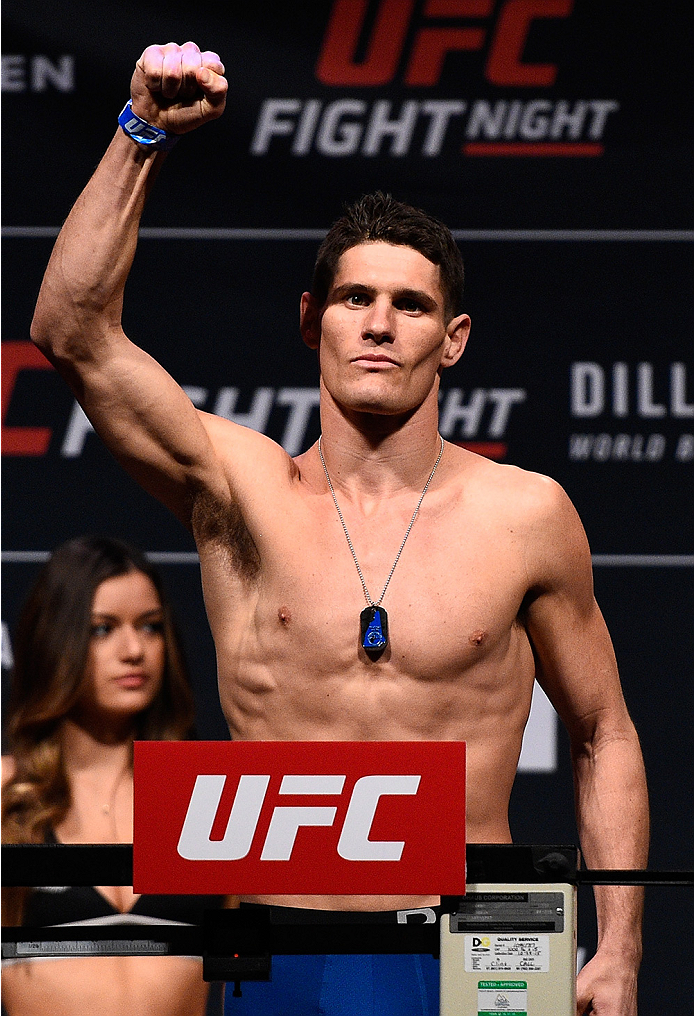 BOSTON, MA - JANUARY 16: Charles Rosa weighs in during the UFC weigh-in at the Wang Theatre on January 16, 2016 in Boston, Massachusetts. (Photo by Jeff Bottari/Zuffa LLC/Zuffa LLC via Getty Images)

Charles Rosa weighs in during the UFC weigh-in at the Wang Theatre on January 16, 2016 in Boston, Massachusetts. (Photo by Jeff Bottari/Zuffa LLC)

It’s not how it ended, as he’s in a far different place in his career and life than he was back then. But even as a talented and popular featherweight preparing to enter the Octagon for the 10th time this Saturday to face Justin Jaynes, those eggs and white bread days are never too far from his mind.

“I never forget that,” Rosa said. “And that's the dog in me. You watch all of my fights, and win, lose or draw, I never quit. I think I have the biggest heart out of any fighter. I fight with all my heart, I train as hard as I can, and I do what I can do every fight.

"That's what I live by and that's how I was raised. When I was a kid growing up, my dad never really cared if I scored ten goals in a game or if I got straight As; he just cared that I tried hard. But if it ever said, 'lack of effort' or 'you need to try harder,' on my report card, that would be more of a problem than getting a bad grade. That was the way I was raised and that's the way I fight, too, so it's been instilled in me.”

Mixed martial arts is a game of inches, though, so sometimes tough ain’t enough at the UFC level. Rosa has seen that in the two losses he’s had since his return from neck surgery against Bryce Mitchell and Darrick Minner. Of course, he’s taken confidence in the wins over Manny Bermudez and Kevin Aguilar, but he does admit that maybe he took the foot off the gas during wrestling practices in order to not stress his neck. Four fights in, everything is obviously in working order, so as he gets ready for Jaynes, he’s gone all in on the mats this camp, just like old times. 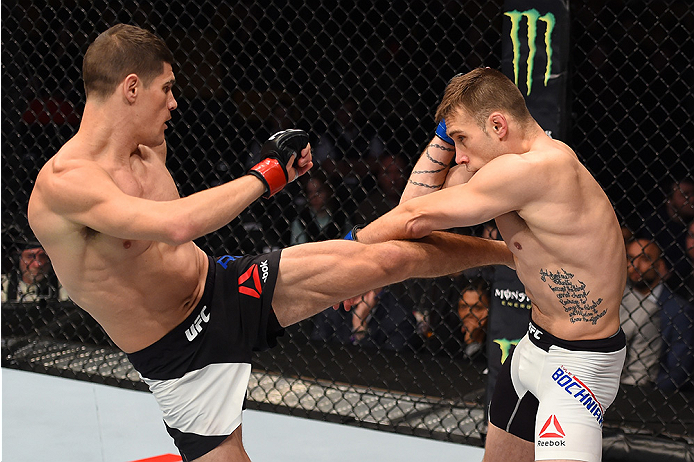 “At first I was a little hesitant to train fully, but this is the first camp that I'm going back to my full training and the way I trained before my injury,” said Rosa, who is also finding motivation in the journeys of ATT teammates Jorge Masvidal and Dustin Poirier, as well as newly crowned lightweight champion Charles Oliveira.

“The guys who stick with it are an inspiration to me,” he said. “Charles Oliveira, you look at his start in the UFC, and he had some tough losses, he’d win some, lose some, back and forth, and he wasn't always the guy. But he's a guy that never gave up, he stuck with it, he kept working hard, and now he's a great champion. Another one, even though he lost his last fight, is Jorge Masvidal. He had his ups and downs his whole career and now he's basically a legend. Everyone knows Jorge and what he's done.

"Even Dustin Poirier. There was a point where I saw him when he lost to Conor McGregor, it was tough, and you wonder how you come back from something like that. Then he comes back and becomes the UFC champion and then beats Conor McGregor. That's just extra help for me because now that I've seen it be done, I know even more that it can.”

Sometimes, that glimmer of hope is all you need. And now that Rosa has it, he believes nothing will stop him from getting to where he wants to go. 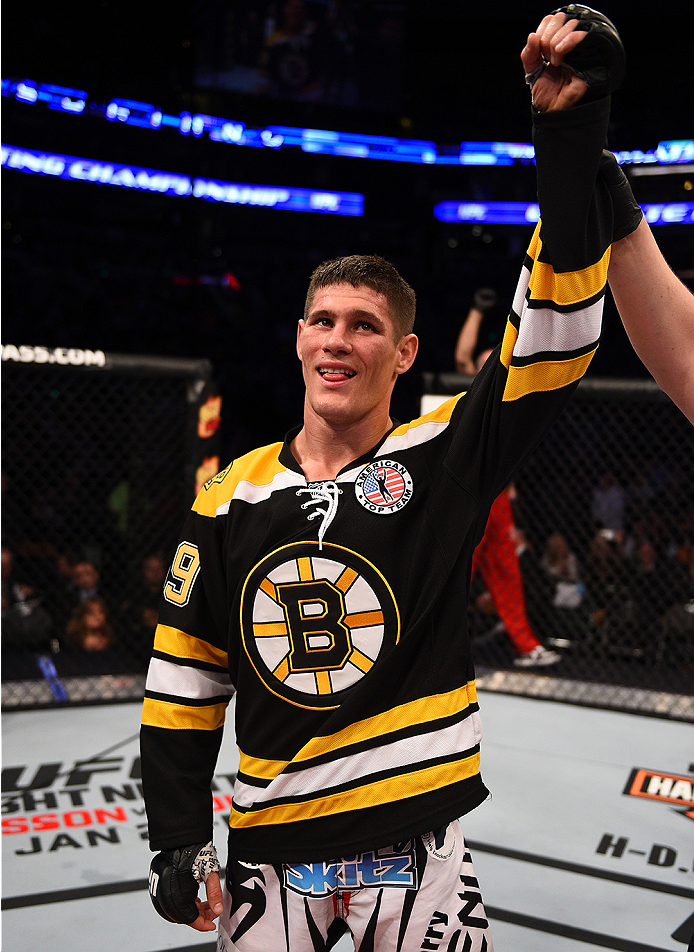 Charles Rosa reacts after defeating Sean Soriano during a featherweight fight during the UFC Fight Night event at the TD Garden on January 18, 2015 in Boston, Massachusetts. (Photo by Jeff Bottari/Zuffa LLC)

“There's no way you can break me,” said the fighter dubbed “Boston Strong.” “My whole goal, I'm not just fighting here to say I fought in the UFC; I fight in this because I want to be the champion. I've sacrificed relationships, I've sacrificed jobs, I've sacrificed other careers, I've sacrificed friends and where I live to come down and chase my dreams. That's what I continue to do and I'm not gonna stop until I get what I want or I feel that I'm not able to.”

So we’re stuck with him for a while?