It's Taken Time But Charles Rosa Is Reaching His Prime

As a UFC veteran of more than five years, Charles Rosa has developed into the fighter he always hoped he would be.
By Thomas Gerbasi, on Twitter: @TGerbasi • Oct. 15, 2019

Charles Rosa thought he was going to a boxing gym. It wasn’t quite that.

“I go in there and some skinny dude gets me in a triangle and it was Cole Miller,” he laughs. “The next day, Charles McCarthy told me that skinny guy was Cole Miller, a top ten fighter in the UFC. The light bulb went on and I haven’t stopped since.”

Sounds simple enough. In fact, it’s the origin story of so many current members of the UFC roster. But a lot has happened to Peabody, Massachusetts’ Rosa between those early days in Florida and his Saturday bout in Boston against Manny Bermudez.

There was the early success on the regional circuit. Then a short-notice UFC debut against Dennis Siver that spoiled Rosa’s perfect pro record but also earned him respect and a Fight of the Night bonus. This was followed by wins over Sean Soriano and Kyle Bochniak, and Fight of the Night losses to Yair Rodriguez and Shane Burgos. In short, life was good for Rosa.

Then it wasn’t. At least when it comes to Rosa’s fighting career, one which got put on hold when a neck injury kept him from pursuing the dream he had ever since Cole Miller introduced him to mixed martial arts.

More than two years after his loss to Burgos in April 2017, the 33-year-old Rosa can breathe again.

“It (being out) killed me every day,” he said. “But I was always focused, I just wasn’t fighting.”

For as long as he was on the sidelines, Rosa stayed in the gym, doing what he could to get better and get cleared to fight. He traveled around the world to places like Cambodia, Thailand and Holland to stay active and work on his skillset, and when he was home, he was hitting the physical therapy facility every day, sometimes twice a day. Looking back, he believes working on his physical health often took a back seat on his rise up the ranks.

“Honestly, I look at it now that it’s over like it was a blessing in disguise,” Rosa said. “I always thought if you wanted to get better at fighting, you fought. I neglected taking care of my body. For the last 8-10 years since I started training MMA, I was non-stop. I would train every day four to six hours a day. I never really took a step back and my body paid the price for it. I think I fixed that problem.”

That’s not to say there weren’t moments when he wondered if he would ever get back to competing in the Octagon.

“There were days in my head I would doubt it,” he said. “I felt good enough to go train, but I didn’t feel confident enough to take a fight. But I was always the type of person who would never give up and who would always chase after my dreams. No matter what, I’m gonna do everything I can possibly do, and if it ends up not working out, so be it. At least I put my heart into it and did everything I could possibly do. But I’m not gonna quit until I do that.”

Rosa didn’t quit, and this Friday, in his hometown of Boston, he gets to make what he hopes will be a triumphant return. Some would say just getting back to work is a victory in itself, but Rosa wants more than that. And he believes he now has all his ducks in a row to make everything he’s worked for a reality. 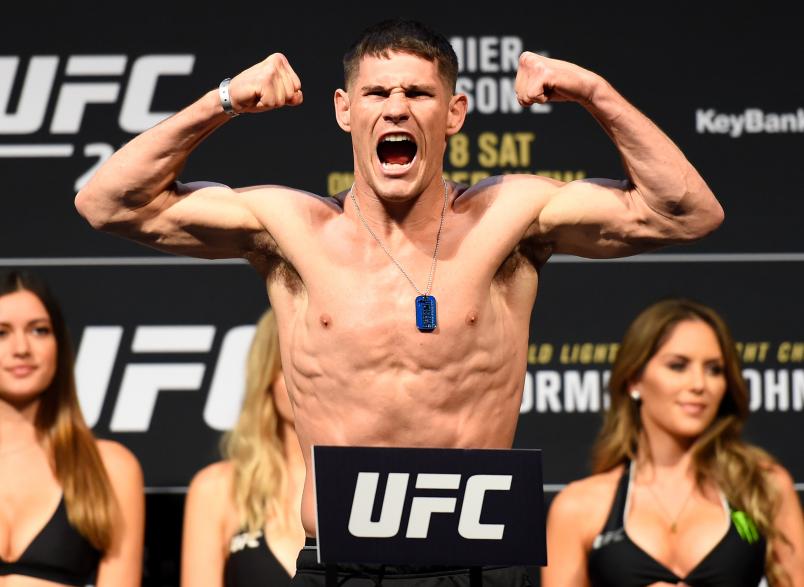 “When I first came into the UFC five years ago, I was a tough jiu-jitsu fighter,” he said. “I was a tough kid when I came into the UFC, but I don’t think I had near the skills I have now. And I didn’t get any less tough. (Laughs) So I know where my skill level’s at now and that’s what excites me the most. I’m all in on this fighting thing. I’m shooting for a world title and I’m aiming high.”

Sounds like Rosa missed this stuff a little bit.