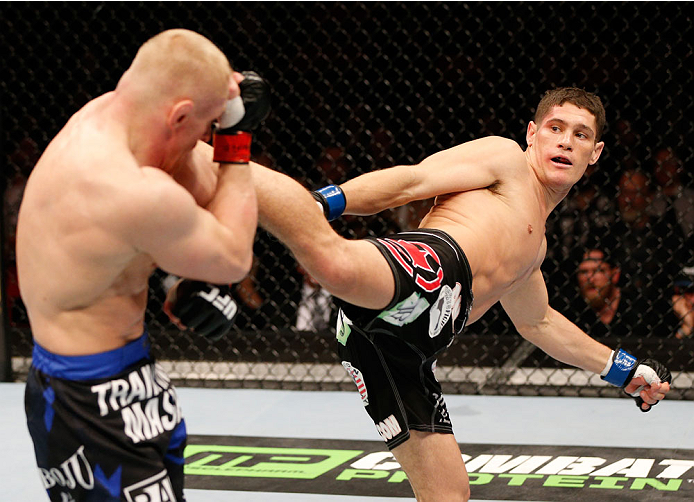 Charles Rosa always pictured himself under the bright lights of the Boston Garden, fighting an opponent as his family and friends cheered him on. He gets his chance at the TD Garden in Beantown against fellow featherweight prospect Sean Soriano on January 18, but it’s not going to be the way he once visualized it.
“I grew up watching the Celtics and the Boston Bruins, mostly the Bruins, in the Boston Garden, always wishing as a little kid that I could play hockey there,” the Peabody, Massachusetts native said. “My ultimate dream was to maybe get into a hockey fight at the Boston Garden and be able to be on the Bruins, but it worked out a little differently, which I think is even better. I get to fight in the UFC and I have everybody on my side.”

From hockey to lacrosse to mixed martial arts, the New Englander has fit a lot of life into his 28 years, and while he’s still got plenty of time to go in order to reach his other goals in life and his career, Rosa’s first fight at home as a member of the UFC roster will always feel like a seminal moment.
> Check out Charles Rosa's full fighter profile

“Growing up, all my role models were sports players,” he said. “Tom Brady, Ray Bourque, and guys like that. When I was a little kid, Ray Bourque was the first player to give me his autograph and I really felt special. And now it’s pretty cool because sometimes kids come up to me and ask me for my autograph. It’s come full circle and it gives me a good feeling inside. And I know the more I win the more I can represent my town.”

It wasn’t easy getting to this point, if this point was even where Rosa was heading. He loved sports, he loved competing, and he loved food. The first two loves got satisfied by hockey and then lacrosse, which he played at Johnson & Wales University in Rhode Island. It was there that his third love found a home as well, as he picked up his degree in Culinary Arts at J&W. 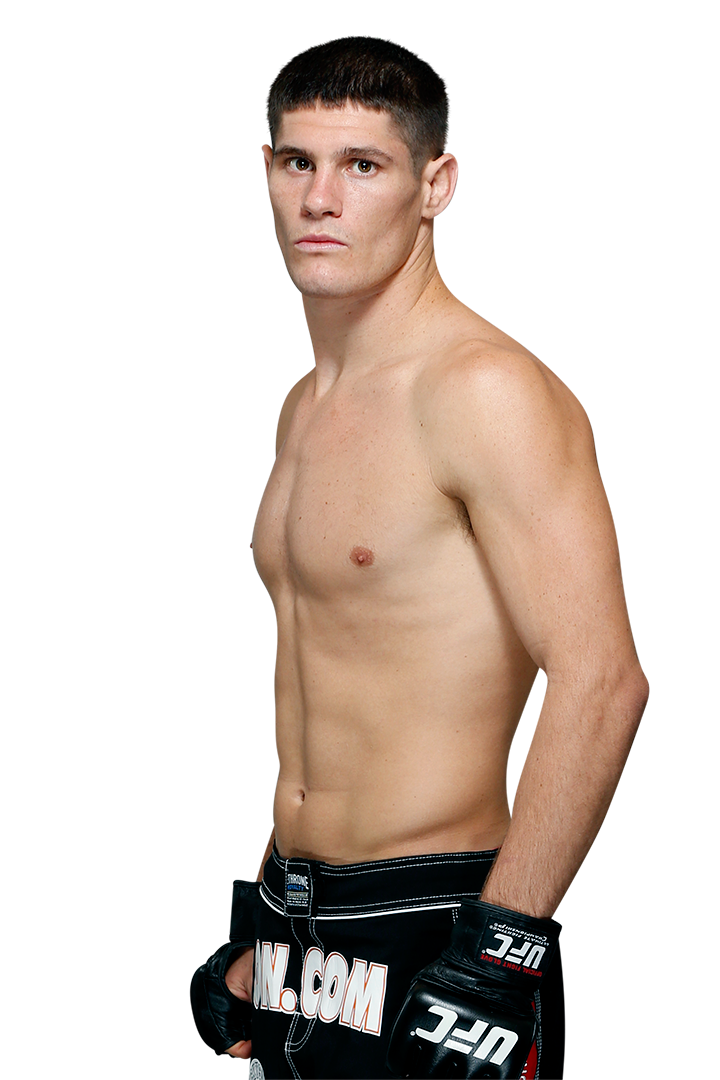 But there were struggles, first with the loss of his older brothers Dominic and Vincent to drug overdoses, then his own issues in the aftermath of their passing. Florida provided a fresh start for him, and once he found the American Top Team gym, things became a bit clearer.
“I didn’t put all my eggs in one basket right away,” he said. “I went to culinary school at Johnson & Wales and lived there for three years and got my degree. But I always had a need to play competitive sports. So once hockey and lacrosse was done, I needed something else, so that’s when I walked into the gym. It started off as a hobby and I was working full-time, and slowly it progressed.”

Rosa competed for a while on the amateur circuit as he learned the difference between fighting as a job with the gloves on and fighting on the ice when your center gets hit with a cheap shot and the gloves come off. He had success, but doubts as well.

“It was an interesting process because a lot of times I questioned whether it was worth it,” Rosa said. “But I just followed my heart and my parents told me to do the same.”

Chucky and Mary Rosa have gone through the worst possible situation for any parents to deal with – the loss of a child. To go through it twice with their sons Dominic and Vincent is something unfathomable. In response, they started the non-profit Chucky’s Fight to educate and help fight teenage substance abuse, a quest that helps them hopefully save another family from the fate they have been dealt.

The Rosas found themselves in Stockholm, Sweden on October 4, five days after their son Charles got a call to fight Dennis Siver in the UFC. After turning pro in August of 2012, Rosa ran off nine wins without a loss. He was good and likely on his way to the UFC, but this call to replace Taylor Lapilus against Siver in less than a week came out of the blue.
He was cool under pressure on fight week, but now he describes the whole scene as “nerve-wracking.” That’s no surprise when you consider that he had to lose close to 30 pounds before stepping into the Octagon against an opponent sitting in the featherweight division’s top 15.

But Rosa didn’t fight nervous. He took the fight to Siver from start to finish, not just going 15 minutes with the German veteran, but delivering a performance that earned the two Fight of the Night honors. Rosa lost the decision, but he won the crowd.

“I’m pretty humble, but when I look at it from an outside point of view, I think that the fight was definitely respectable,” he said. “I think that’s what real fight fans understand and that’s what fighting’s about. It’s about heart and stepping up when you get an opportunity and taking it. That’s how I was raised – to always be ready, never give up, and take advantage of opportunities when they come. That’s really just what I did and I think any fight fan can respect that.” 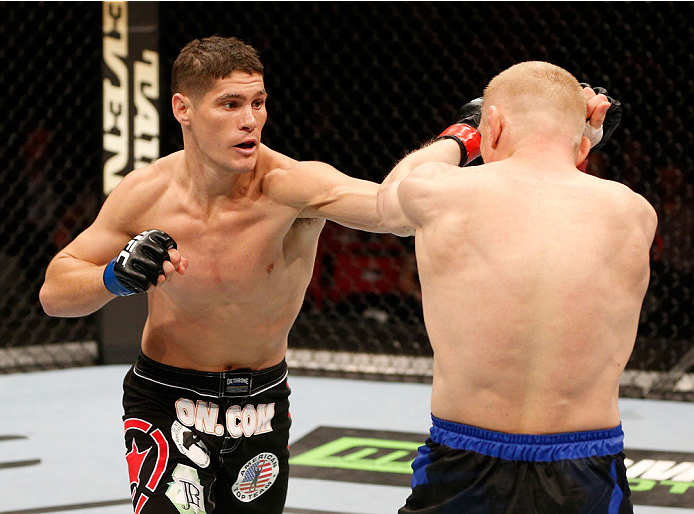 Chucky and Mary Rosa certainly did, but then again, they’ve always been in his corner.

“After the fight I was really upset that I lost, but once I saw my mother and father in the crowd, I looked at their faces and I knew I had done something special because they were so happy,” Rosa said. “They know that this is what I love to do and they want to see me happy.”
> Watch Charles Rosa's debut against Dennis Siver on UFC FIGHT PASS

Three months removed from Stockholm, Rosa is back in Florida and preparing for next week’s scrap. Boca Raton’s Soriano is originally from Providence, Rhode Island, making this bout a New England turf war between two guys now living in Florida. It was in the Sunshine State that Rosa first took notice of his opponent.

“I fought in the CFA in Miami and when I was coming up, he was coming up too,” he said. “He was a little bit ahead of me, and he was the champion. I was 4-0, 5-0 and moving up the ranks and I always fought on the cards that he was fighting on. My eye was on that belt, so I knew I’d eventually have to get to him. It’s pretty cool that it’s for the UFC. That’s the best way to cross paths.”

And in Boston, no less. But at the moment, the work is done in the much more agreeable weather of Florida, where, ironically, Rosa lives within striking distance of Soriano’s Blackzilians gym in Boca. Let’s just say he doesn’t avoid the “enemy.”

No one likes to lose, especially in this game. Yet oddly enough, Charles Rosa did more for his profile in one UFC loss than many fighters do with a bunch of wins. That’s not enough for him though, just like it wasn’t enough for his heroes Bourque and Brady. You will lose – in life, in competition – but it can’t be what you leave on the table as your legacy.

It’s why Rosa puts in the hours in the gym, runs that extra mile around the gym of his opponent, and makes the sacrifices necessary to succeed. He still works one day a week as a chef at Cut432 in Delray Beach, but a full-time gig in the kitchen isn’t on the menu at the moment. He’s chasing gold.

“I know there’s a certain window to be a fighter and to really do something special that nobody else can do, and I’m definitely taking a shot at it,” he said. “I’m in this to be a champion; I’m not just in it to fight in the UFC. I want to be the best, and that’s what I’m gunning for.”
> See the full UFC Fight Night: McGregor vs. Siver fight card