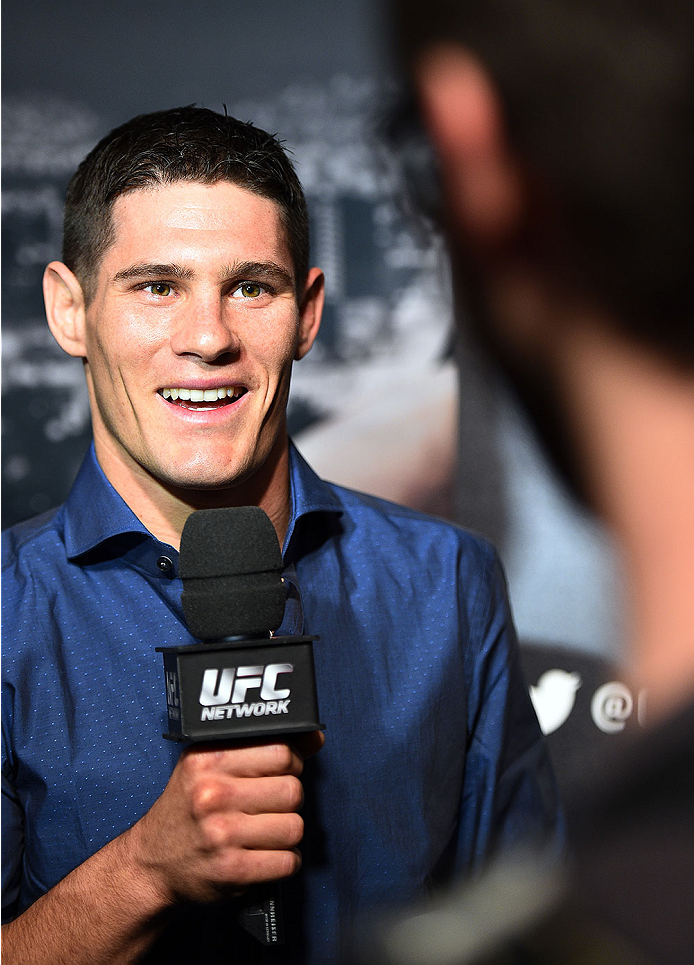 As a UFC featherweight, as well as a chef at the Delray Beach steakhouse Cut 432, it might be safe to say that Charles Rosa's constant state is "hungry." That’s most certainly the case today, as he awaits a trip to the scales to make weight for his UFC 188 bout against Yair Rodriguez on Saturday night in Mexico City.

But even though the physical sacrifices that come with fighting - like cutting down to 145 pounds while being surrounded by food several times a week - are the ones being referred to, hungry is also a state of mind for Rosa, a 28-year-old young man who may not be in a rush, but he isn’t sitting idle either as he looks to soar up the featherweight ranks.

So when he debuted on short notice against veteran Dennis Siver last October and lost a close, but unanimous, decision that gave him his first pro defeat, it wasn’t the ideal situation, but one that he took as a lesson to carry with him from that day forward.

“It let me know that this isn’t something you’re just gonna walk through,” he said. “I’m not just gonna go 5-0 and get a title shot and it’s a snap of the fingers, ‘oh, that was easy.’ It’s gonna be tough and there are going to be things I have to work on to get there.”

If it’s any consolation, a total rehaul wasn’t necessary. In fact, despite the scores rendered by the judges in Stockholm when he faced Siver, it was a razor-close and exciting bout that saw Rosa put the vet in trouble several times, and that earned the pair Fight of the Night honors. That doesn’t mean seeing a “1” in his loss column doesn’t sting sometimes.

“It definitely bothers me,” he laughs. “I always liked saying ‘I’m undefeated,’ but when I look at all the other great champions in the UFC, that’s one of the things that motivates you, matures you, and it takes some of the pressure off. I think it’s a blessing in disguise for me, but I still don’t like to see it.”

In January, Rosa put another “1” in his win column when he submitted Sean Soriano in an All-New England battle in Rosa’s hometown of Boston, and now with his first UFC win and first UFC loss out of the way, it’s time to move past the .500 mark in the Octagon against TUF Latin America winner Rodriguez. For American Top Team’s Rosa, it’s as if everything is happening at precisely the right time.

“If someone told me a year ago that today I’d be fighting on the main card of the heavyweight championship of the world in Mexico City against the Ultimate Fighter winner, I would say ‘yep, that’s where I want to be,’” Rosa said. “I feel like I’m on a pretty good streak. I got the Fight of the Night bonus against Dennis Siver and that didn’t really feel like a loss to me. It went to a decision, I didn’t feel like I was defeated, I was still standing, and I was on top of him at the end of the fight, and then I went and finished Sean Soriano in my hometown, and now I’m getting to represent my country in Mexico. So I feel like everything’s falling into place.”

About the only thing that’s really changed for Rosa is that despite verbally sniping at Siver before their bout and having a little heat with Soriano due to the American Top Team vs. Blackzilians rivalry, the lead-up to the matchup with Rodriguez has been relatively quiet. And that’s fine with the affable Rosa, who says he doesn’t need any pre-fight grudges because once the Octagon door closes, it’s going to feel like he’s got one against his opponent.

“Once I get into the cage, I’m not the same Charles Rosa you’re talking to now,” he said. “When I get into the cage, I’m a completely different animal. Even my mother says she doesn’t recognize me. (Laughs) All the things that I think about and all the stuff that I went through to get to where I’m at is what goes through my mind, and I think that’s what really makes a true fighter; all the things you persevere through in your life. That’s what gives you the fighting heart and spirit. All that technique and stuff is a minimal part of it. Everybody in the UFC has the skills. It’s about the mental strength. And once he’s standing across from me, he can be the nicest guy in the world, but I’m looking at this like it’s two gladiators and only one of us is gonna leave alive. That’s why I feel like every fight I’ve had has been a finish.”

And he’ll be looking for another one Saturday night. So maybe Mr. Rosa is a young man in a hurry. But he’d just prefer that one day you call him “Champ.”

“That’s what I do this for,” he said. “I can be a chef full-time and stuff, but I’m in this to be in the UFC and be the champion. I don’t do it just to compete. My goal is to be the champion, and if I didn’t think I could do that, then I wouldn’t be fighting.”