No Matter If It's A Hostile Crowd Or An Opponent's Home Town, Charles Radtke Has An Answer For Every Circumstance
By Walker Van Wey, UFC FIGHT PASS • Mar. 15, 2022

Few fighters outside the UFC flourish with the “bad guy” role and few fighters inside the UFC are good at it. Charles Radtke is the exception to both.

Cage Fury 100 was the coming out party for Brandon Lopez. The arena was filled with what appeared to be Lopez’s family reunion. One hundred percent of the crowd was screaming their throats out for him and making his opponent, Radtke, know that he was a long, long way from home. All that was left for him to do was win.

“Most all of my fights have been going against tough opponents against people in their hometown,” Radtke said. “I feel like I’m the Jorge Masvidal of my generation, where I’m the journeyman that’s going to other people’s hometowns and I’ve got to do something.”

With just under two minutes left in the first round, Radtke had Lopez bleeding from the nose and whiffing heavily on punches. Radtke had won fights before, he’d been behind enemy lines before, but there was something about the Tampa air that sat differently with “Chuck Buffalo” that night.

“I just had enough of it,” Radtke said. “I went out there and I knew I had nothing to lose. I’m, number one, willing to die out there and, number two, I’m going to kill this m**********r. F*** everybody else, everybody’s against me.’ The whole crowd wanted him to win, and I knew that, but I stayed stoic the whole time out to the cage, and as the fight went on I just felt something. I hit a stride, and something ignited inside of me.”

With about 90 seconds left in the second round Radtke ruined the entire arena’s night with a flat line-inducing punch followed by a follow up shot to his opponent. Just to rub salt in the wound, Radtke gave every bit of disdain right back to the crowd who rained “boos” down on him.

“I didn’t really care about them,” Radtke said. “I was, honestly, trying to fight people in the crowd but the only thing I was worried about was that Rob Haydak came right up to the cage and I thought he was going to fine me.”

Radtke doesn’t view his actions as “over the line” and he doesn’t necessarily find himself to be fighting with a “bad guy” persona. To him, it’s about respect, and just as the crowd of CFFC 100 learned, he’ll earn it any way he has to. 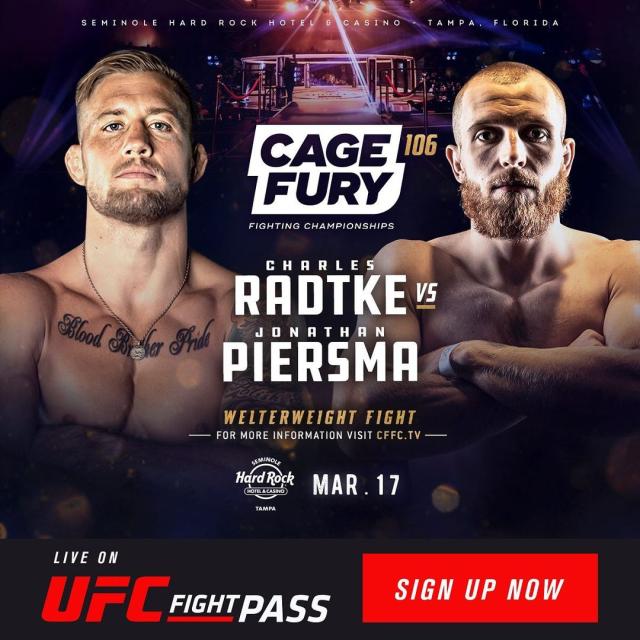 “I will give my opponent all the respect in the world, but if they ever disrespect me before a fight I’ll hit them,” Ratdke said. “It’s one of those things where I can’t handle disrespect. I can always keep composure, but I always let them know that if they want to start s**t before the fight I’m willing to go after them. I have no problem with doing that.”

As long as they’re respectful, Radtke will even go have a beer afterwards, but cross that line and Jonathan Piersma will have hell to pay.

“I don’t really look at myself as the bad guy; I look at myself as somebody who doesn’t put up with any bulls**t,” Radtke said. “If you come at me and are going to be cheering against me or telling somebody to kill me or if you’re an opponent that’s talking s**t to me, you better be ready for the consequences because there’s a reaction for every action.”

Catch the return of Charles Radtke at CFFC 106 by signing up TODAY for UFC FIGHT PASS!