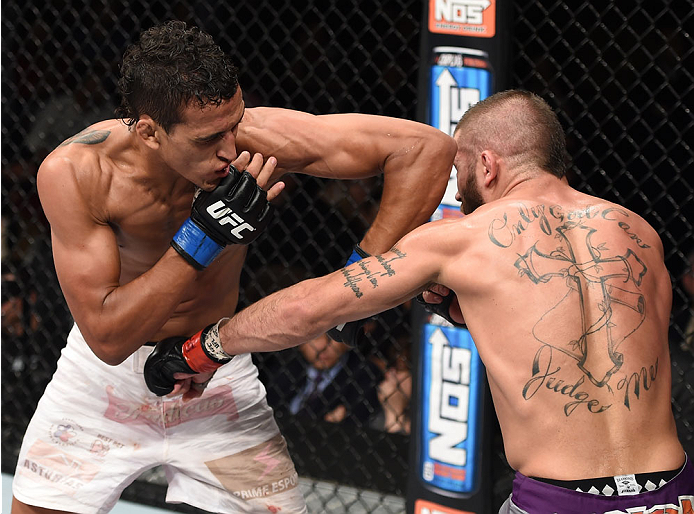 Despite nearly four years, eight fights and ten pounds, UFC featherweight contender Charles Oliveira has not forgotten his 2011 lightweight bout with Nik Lentz, an opponent he always knew he would see again.

“We have unfinished business,” Oliveira said, and it’s business that will presumably be settled this Saturday in Goiania, when the two meet in the UFC Fight Night co-main event.

Back in their first bout, the two were 155-pounders on the rise, and for nearly seven minutes, they delivered plenty of action for fans in Pittsburgh. At the 1:48 mark, Brazil’s Oliveira had apparently ended Lentz’ night via rear naked choke, but since the submission was preceded by an Oliveira knee to his downed opponent, a no contest verdict was rendered. The two received a Fight of the Night bonus for their efforts, but Oliveira wanted the win.

“Anyone that saw that fight saw how I dominated him,” he said. “His strong point is wrestling, but I was the one taking him down, working my top game on him.  This guy was really hurt bad in the fight, so he starts faking standing up in the three-point stance.”

Obviously amped up to get another crack at the American Top Team standout, Oliveira has nonetheless moved on with his career, moving to featherweight in 2012, and after back-to-back losses to Cub Swanson and Frankie Edgar in 2012-13, he has turned things around to the tune of a three-fight winning streak. Included in that streak are two Performance of the Night submissions of Andy Ogle and Hatsu Hioki, and a decision win over Jeremy Stephens. In the Stephens fight last December, “Do Bronx” appeared to be on his way to another finish, but the resilient Iowan stuck around for 15 minutes, a fact that impressed Oliveira.

“Jeremy Stephens is an awesome fighter,” he said. “He has so much experience against top level guys.  I was not surprised at how talented he was.”

The 25-year-old Oliveira has always had talent. It’s the UFC experience that is now catching up to that talent, and he’s showing his best form yet heading into this pivotal matchup.

“I went to UFC when I was 18, and I’ve trained very hard, but now I have experience,” he said.

He’s also become must-see TV for fight fans, as he shows up to finish every fight, whether on the ground or the feet.

“My stand-up game is just like my ground game,” he said. “Very aggressive, with high risk for high rewards.  I have been working a lot on my striking, and I know I will hit Nik with more knees and with more power this time. It’s just the way we train at Gold Team.  We always look to finish.”

Excitement, a winning streak, and a chance to avenge a result that still doesn’t sit right with him. It sounds like the kind of weekend that can kick off a 2015 campaign that could be even better than his breakout year in 2014.

“Like always, I fight who they tell me, and I want to make exciting fights for the fans to enjoy,” Oliveira said. “But I did ask to fight Nik Lentz again. I know he trains hard, and that he has gotten better, but I train harder, and am much better now.”