11 Years Into His UFC Career, "do Bronx" Looks To Cement Dominance With Lightweight Title
By Steve Latrell on Twitter @TheUFSteve • May. 12, 2021

When he’s not training for his day job as an elite UFC lightweight, Charles Oliveira has another passion that fills his time: he keeps racehorses back home in Guarujá, Brazil. You may have seen American Trotter horses: they race in a trot or a pace with the jockey riding a two-wheeled card behind them.

“Gia, one of my corners, got me into this,” he explains. “Racing and horses are what we love. It’s what brings me peace. It’s what I breathe to go back training. It’s my passion”.

MMA and thoroughbreds might seem like a disparate set of passions, particularly given the genteel nature of this niche of horse racing. But Oliveira sees it differently.

Most of us will have to take his word for it on that one, but anyone paying close attention to the lightweight division the past few years will certainly identify “Do Bronx” as someone who doesn’t want to lose. Oliveira’s eight-fight win streak is second only to Tony Ferguson’s record dozen in UFC history, but the key difference is Oliveira’s streak is still active as he heads into his first lightweight title shot at UFC 262.

Even with a stellar string of often one-sided wins in the sport’s deepest division, there are those who would argue Oliveira had been overlooked or taken for granted. Perhaps his middling years at featherweight allowed him to fly under the radar when he returned to lightweight in 2017. Certainly, fighters with lesser credentials on paper have competed for the strap in the interim. But deep into his 11th year in the promotion, none of this feels overdue to Oliveira.

“No, not really,” he insists. “We knew the opportunity was coming for us. I had done a great fight against Tony Ferguson and I knew it was my time. I’m very happy with the opportunity. I’m living this amazing moment God gave me, and our time has arrived."

His “time,” as he describes it, arrives with the Brazilian possessing one of the more enviable résumés in the promotion. Oliveira owns all-time UFC records for finishes and submissions wins. If he can secure two more performance bonuses before he’s done, he’ll own that category too. At just 31 years of age, those odds are pretty good.

The third-degree BJJ black belt has built his name on an absolute mastery of the submission finish. His pro career is dotted with nearly every variety you can imagine: rear-naked choke, anaconda, guillotine, triangle, kneebar…even a calf slicer. Opponents can’t be on the lookout for a signature move, because they’re all part of Oliveira’s toolbox. With the shortest average fight time in the UFC, Oliveira averages more than three submissions for every 15 minutes in the Octagon. That’s just plain scary, and in recent years, established veteran lightweights look like they struggle for answers against him.

It’s that prowess on the ground that made a pairing with retired champion Khabib Nurmagomedov something of a dream matchup for fans…and even Oliveira himself.

“Absolutely, everyone would like to fight Khabib. He’s 29-0, he deserves all the respect in the world. I respect him a lot. But unfortunately, he retired. He did the right choice, retired undefeated and he deserves all our respect”.

That bout will have to live in the fantasies of fight fans. But a very real and equally thrilling test will be standing across the Octagon Saturday in Houston when he meets Michael Chandler in the main event.

“He’s a very tough guy. He was champion at Bellator, he’s very good on his feet, has very good wrestling, but I’m not worried with what Michael Chandler can bring into the Octagon, but with what I can bring”.

Knowing Chandler’s stellar track record of knockouts, a lazy analyst might be tempted to bill the fight as a classic striker vs grappler matchup. Given Oliveira’s aforementioned dominance on the ground, you might almost be tempted to let it slide. Almost.

In 2018, a determination to make his game more complete led him to the tutelage of the esteemed Chute Boxe Diego Lima to work on his standup game. He tries to divide his training these days between both disciplines.

“I always have to train jiu-jitsu in order to keep evolving, and I went to Chute Boxe to train with Diego Lima to develop my striking, which I’ve been doing and proving. I’ve been doing a little bit of everything to become a more well-rounded fighter each outing.”

He proved to be an adept learner, as both Nik Lentz and Jared Gordon would find out in 2019 when they landed on the wrong side of his knockout punches. He’s ranked in the top five for significant strike accuracy, ahead of proven punching juggernauts like Dustin Poirier and Dan Hooker. Far from being a decoy for his ground game, he’s a legitimate threat on the feet.

When I ask to what he credits his remarkable evolution to well-rounded dominance, the amiable Brazilian answers with his trademark polite, quiet confidence. 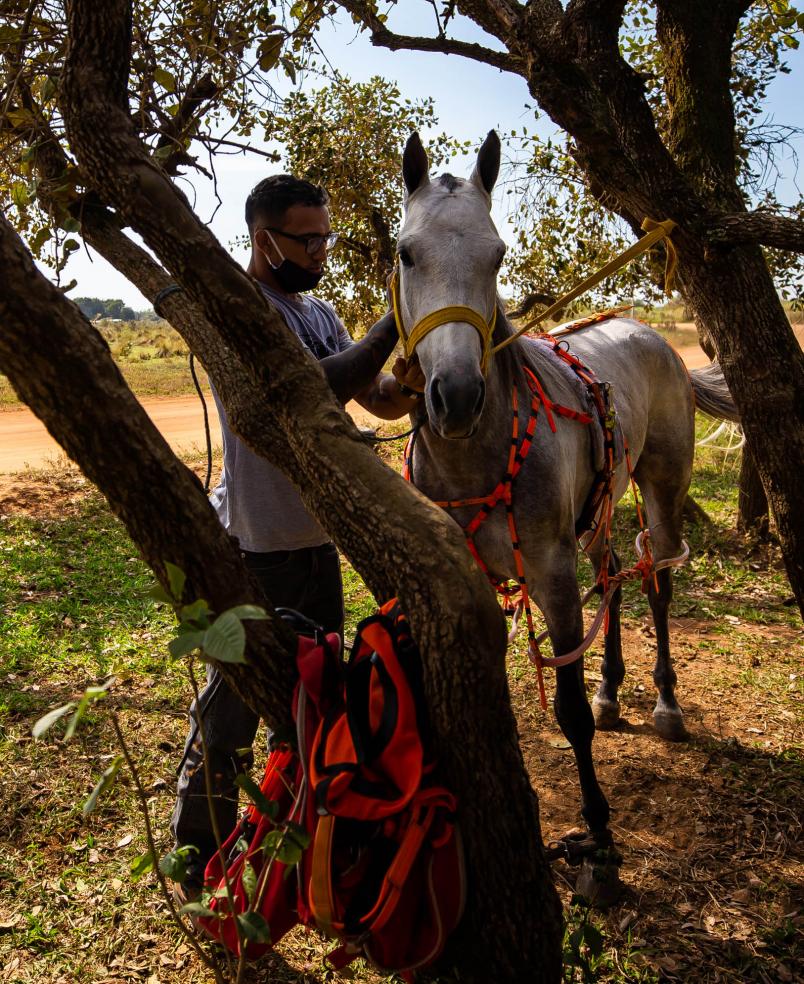 Charles "do Bronx" Oliveira takes care of one of his horses on July 11, 2020 in Campinas, Brazil. Charles holds multiple UFC records and competes in the lightweight division. During his free time Charles keeps race horses. American trotters are horses specialized in harness racing, in which animals compete in a trot. (Photo by Buda Mendes/Getty Images)

Charles "do Bronx" Oliveira takes care of one of his horses on July 11, 2020, (Photo by Buda Mendes/Getty Images)

“First of all, being humble, feet on the ground, and always wanting to learn, grow and evolve. Training, dedicating myself to it. That’s what I’ve done.”

That dedication has delivered him not only to the ultimate prize in the UFC, but the chance to have his name inscribed alongside countrymen like Anderson Silva, Amanda Nunes, Jose Aldo and others as one of the great Brazilian champions of the sport. He’s visibly affected as he ponders this.

“They’ve made history and continue making history in the UFC. They’re people who deserve all our respect, and if I’m able to be in this group as well, it’ll be amazing. I came to the UFC to make history, and that’s what I intend to do.”

And how will he celebrate back on the horse farm?

“In the name of God, I’m gonna get this belt. I want to be close to my family, my friends, the favela. I’m sure Guarujá and Brazil will come to a halt when I win.”