"Cub and I are the type of fighters that always want to finish the fight. We are not afraid to go for the finish." - Charles Oliveira 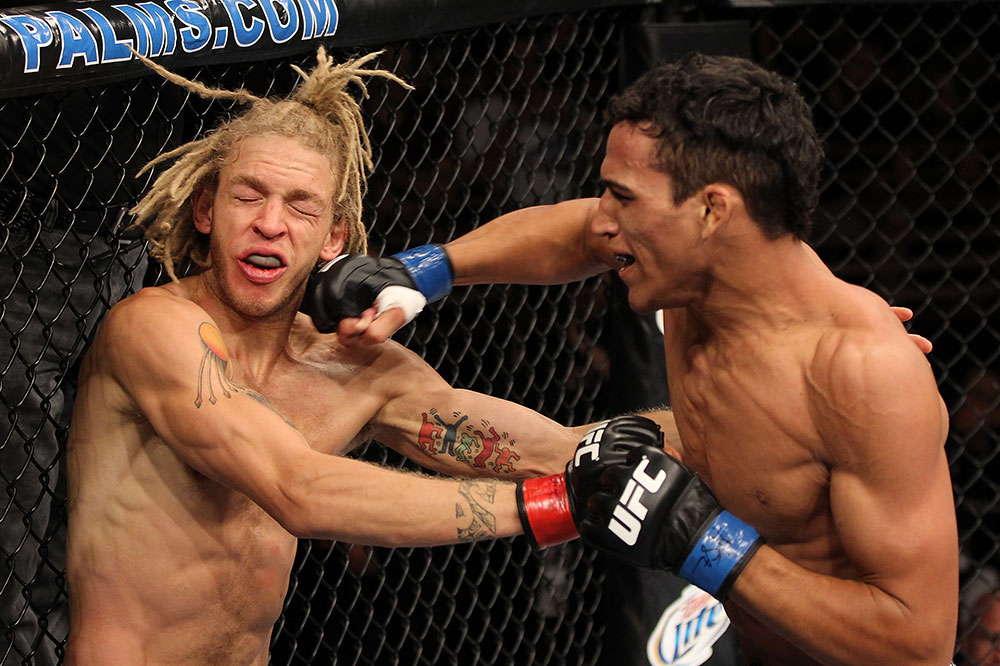 It was perhaps the fastest rise and fall seen in the UFC in years. Tearing out of the gate with ferocity and unbridled energy, 20-year-old lightweight Charles Oliveira ran through Darren Elkins in 41 seconds and then issued The Ultimate Fighter eight winner Efrain Escudero an upset defeat in the space of a month and a half in 2010.

But then came a December 2010 loss to Jim Miller in less than two minutes, a controversial no contest against Nik Lentz in June of last year, and a first round TKO loss to Donald Cerrone two months later that had no controversy whatsoever attached to it.

From 2-0 and the toast of the town, to 2-2, 1 NC and a questionable future. It’s usually around this time that young phenoms who hit a string of adversity fade away, never to reach the potential many felt was their birthright. Yet just as Oliveira shocked the MMA world by coming out of nowhere to deliver his first two UFC performances, he did the same thing after three disappointing efforts, announcing his decision to move 10 pounds south from lightweight to featherweight in 2012.

He hasn’t lost since, reinventing himself while still keeping his old energetic attack. In January, he nabbed his third Submission of the Night award by submitting Eric Wisely with the first calf slicer sub in UFC history. June saw him submit TUF 12 winner Jonathan Brookins in the second round, and on Saturday, he’ll attempt to make it three for three at 145 against veteran contender Cub Swanson.

“Cub is very experienced, has fought in the big fights, and has wins over great fighters,” said Oliveira, six years the Californian’s junior. It’s a bout that is expected to produce fireworks, hence its place as the UFC 152 main card opener in Toronto. Such expectations don’t bother Oliveira though.

“No pressure, Cub and I are the type of fighters that always want to finish the fight,” he said. “We are not afraid to go for the finish. That is what is going to make this a very exciting fight - both of us trying to finish each other every second of the fight.”

Those aren’t just slick soundbites from Oliveira; one look at any of his fights, win or lose, will show you that he’s not one for going to the scorecards, and in fact, he’s only gone the route once, winning a split decision over Eduardo Pachu in 2009. Yet despite not having to prove his cardio in a three rounder in the UFC yet, he does feel plenty of other differences since moving to featherweight.

“Sometimes at 155 pounds I was the smaller fighter, at 145 pounds I am more often the bigger fighter, and the taller fighter,” said the 5-foot-10 Brazilian, who will hold a three-inch height advantage over Swanson on fight night. So does he regret not making the move sooner?

“I believe God is always in control,” he said.

A fighter straight out of high school, Oliveira has relied on his faith and a strong support system to keep him on the straight and narrow at an age when it’s easy to go astray. When asked how he avoids the pitfalls experienced by many in their early twenties, he makes it sound easy.

“I stay away from temptation, and focus on family, friends, and fighting.”

It can’t be that easy, but when you do show that kind of discipline, the rewards can often be great. If he beats Swanson this weekend, that’s three consecutive wins at 145 pounds, and then he could start looking at the man at the top of the featherweight ladder, champion and countryman Jose Aldo.

“I believe with a win over Cub, and I will be getting very close to a shot at the champ,” said Oliveira. And you could imagine what a fight like that would mean for Brazil.

“Oh, this would be very big in Brazil,” he said. “People will be very excited.”

Well, first things first, and it’s clear that fight fans are already pretty excited about the matchup this weekend, and with good reason, since Oliveira has already told them what to expect:

“Two fighters fighting very hard to finish each other.”