Charles Oliveira: A Phenom Grows Up

"I want to be world champion. I have done some things in the UFC, but the best is yet to come." - Charles Oliveira 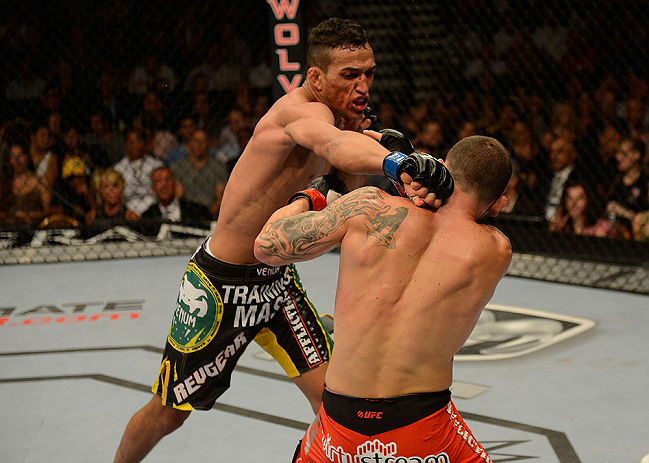 Some athletes know how to make an entrance. Charles Oliveira specializes in making an exit, more explicitly, an exit that guarantees that you’ll want to see him fight again.

That was most definitely the case on Valentine’s Day in 2010, when he fought twice in one night in Santa Catarina, Brazil, submitting Rosenildo Rocha with a rear naked choke and then knocking out Diego Battaglia with a slam. By the time the dust settled, the Sao Paulo native was 12-0 as a pro. Six months later he would be in the UFC, fighting everywhere but his home country until he got scheduled to compete in Jaragua do Sul this Saturday night against Andy Ogle.

“That seems so long ago,” said Oliveira, 24, who was only 20 the last time he competed at home. “I love fighting in Brazil, close to home and family.  Everyone is really excited, and I will have a lot of support, so I think I have a big advantage fighting at home.”

If Oliveira sees his fighting return to Brazil as a big advantage, that’s not something England’s Ogle necessarily wants to hear, because giving “Do Bronx” any sort of leg up in a fight means that you’re in for a long night in the best of circumstances. In the worst, you’re going to be seeing him run around the Octagon with his hands raised in victory while you wonder just what truck hit you.

That’s the kind of talent the rising featherweight star has, even if we’ve only seen glimpses of what he can do on fight night. Sure, there have been off nights against the likes of Jim Miller, Donald Cerrone, and Cub Swanson, but when he’s on, he’s scary. Even his most recent bout, against former world champion Frankie Edgar last July, showed his maturity and skill, despite the final result being a decision win in Edgar’s favor.

“I trained very hard, and wanted to win,” said Oliveira. “It was a big fight, and I went the distance with the champ.  I now have more experience on how to fix my mistakes, and improve on what works.”

Calling it a big fight may be an understatement, as the bout with Edgar was the UFC 162 co-main event in Las Vegas on the night Anderson Silva lost his middleweight title to Chris Weidman. With the world watching and the media frenzy in full effect, Oliveira could have been swallowed whole by the pressure of the moment. But he took everything in stride and was still able to perform on fight night.

“It was crazy,” he admits when asked about the atmosphere surrounding UFC 162, “but I am a professional, and that is what it is to be a UFC fighter.”

Oliveira has earned that title, going 4-4 with 1 NC since his debut win over Darren Elkins in August of 2010. It may not be the most sparkling of records, but when it comes attached to five post-fight bonuses and an all-action style, fans tend to let pesky things like a won-loss record fall to the wayside.

“It is very important to win, but it is also important to make a good show for the fans,” he said. “I always like to take big risks for big rewards and my style makes fights exciting. I fought Nik Lentz (in 2011), and people called him boring and said that he makes boring fights. When we fought, we got Fight of the Night.”

Ogle, a veteran of season 15 of The Ultimate Fighter, has the aggressive style to make for another Fight of the Night candidate, especially since “The Little Axe” proved in his hard-fought decision loss to Cole Miller than he can hang with the best the division has to offer. You didn’t have to tell Oliveira that though.

“Every fight in the UFC is tough,” he said. “Andy has great striking, and a fighter’s spirit, so I have trained very hard to be ready for him.”

So hard that he’s been champing at the bit to get back in the Octagon after injuries took him out of a scheduled October 2013 return, first against Estevan Payan, then Jeremy Larsen.

“After the Frankie Edgar fight, I wanted to fight the next week,” said Oliveira. “Injuries are part of the game, but you can never lose focus.  So I was injured, but I never lost focus.  I think everyone will see how much I have improved; I have trained hard, learned more, and I have more experience.”

He also has the potential to crack the top 15 with a win, and in a division that may be in for a shake-up should champion Jose Aldo vacate his title and move up to lightweight to challenge 155-pound boss Anthony Pettis, the future is certainly bright for Charles Oliveira these days.

“I want to be world champion,” he said. “I have done some things in the UFC, but the best is yet to come.”