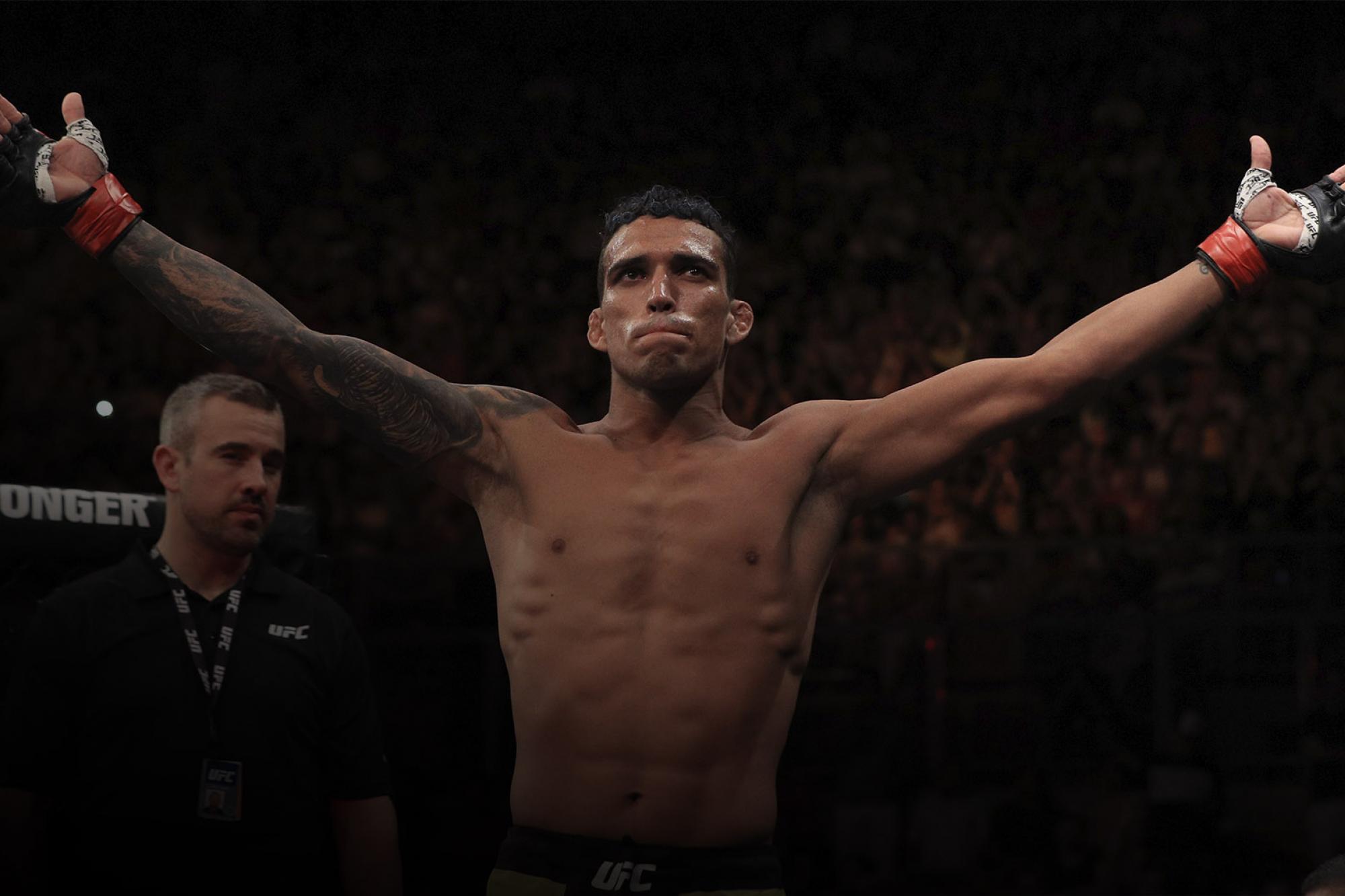 Charles Oliveira has more submission finishes than anyone in UFC history. While the record is nice, Oliveira's attention remains on the belt ahead of UFC Brasilia.
By E. Spencer Kyte, on Twitter @SpencerKyte • Mar. 12, 2020

It’s strange to talk about Charles Oliveira “finally coming into his own” after he’s spent the better part of the last decade plying his trade in the UFC, amassing a 16-8 record with one no contest while taking on many of the top names in the featherweight and lightweight divisions.

Yet, as he readies to square off with Kevin Lee on Saturday night in the main event of the UFC’s return to Brasilia, there is no denying that the battle-tested veteran who only turned 30 this past October is currently on the best run of his career.

A pro since 2008, Oliveira arrived in the UFC as an undefeated 21-year-old brimming with potential who had barely started to grow into his impressive frame. After two quick submission wins over experienced hands Darren Elkins and Efrain Escudero, he was dropped into the deep end of the lightweight division, paired off with Jim Miller, then Nik Lentz, then Donald “Cowboy” Cerrone in a tetra-pack of fights that resulted in zero wins, plenty of doubt, and a change in divisions.

He spent the next five years at featherweight, compiling a 7-5 record while missing weight on four different occasions. For every impressive showing that rekindled optimism about him reaching his full potential, like his calf slicer submission of Eric Wisely or unanimous decision win over divisional stalwart Jeremy Stephens, there was an equally disappointing performance that quickly made you question why you were optimistic in the first place.

Though his losses all came to fighters who have been fixtures in the championship chase, the setbacks in those high leverage contests and his persistent issues with the scale framed Oliveira as someone who would probably never put it all together and reach the lofty heights he was forecasted to reach when he first blew into the Octagon as a bundle of energy with a wide smile and unlimited upside.

“I never lost my focus,” said Oliveira, reflecting on some of the more difficult stretches of his career. “I know that if I can train hard, good things will happen. I am always training hard and learning, and in the UFC, everyone is very good, so you just have to keep training.”

It sounds cliché, but that’s the reality of life in the UFC, especially in the deeper divisions Oliveira has called home.

Everyone is really good, which means you’re going to lose some fights, because everyone loses from time-to-time, and all you can do is get back in the gym and continue trying to improve.

Although fighters and their teams are fully aware of this reality, fans and media don’t often process it the same way, which is how guys like Oliveira go from being highly touted prospects to members of the proletariat as a result of a couple losses against standout competition.

While his 7-5 mark in a dozen featherweight starts doesn’t cast him as an elite contender, those setbacks came against Cub Swanson, Frankie Edgar, Max Holloway, Anthony Pettis, and Ricardo Lamas. That’s one former 145-pound champion, three former title challengers (one interim), and a long-term resident of the Top 10 who was in the midst of the best run of his career at the time they crossed paths.

“Experience in the UFC is very important,” said Oliveira, who spent his early adulthood traversing the globe and learning how to be a professional fighter on the fly. “In some cases, it’s just not the fight, but traveling to another place, cutting weight in a different place, sleeping in a hotel, eating different food.

Oliveira returned to the lightweight division at the outset of 2017, submitting former Bellator champ Will Brooks before suffering a second-round stoppage loss to Paul Felder at UFC 218 in Detroit towards the end of the year.

At the time, it felt like confirmation that the mercurial Brazilian was the fighter most envisioned him to be — an exciting fighter who can’t win the big one and is destined to never reach his full potential — but since then, Oliveira has been forcing folks to reconsider how they view him.

Oliveira has talked about that fight with Felder and the birth of his daughter as the twin turning points in his career; the moments that made him tighten things up with his camp and dial in his focus inside the Octagon.

In the two years since that bout, “Do Bronx” has gone 6-0 with six finishes. He hasn’t seen the third round once, he etched his name in the UFC record books as the fighter with the most submission finishes in UFC history, and claimed five more performance bonuses, bringing him into a tie for second all-time with Joe Lauzon and Nathan Diaz, three back of former opponent and noted bonus-chaser Donald Cerrone.

“I’m on a great path towards living my dream of being champion,” said the humble Brazilian when asked about his current run of success, one that has seen him morph into the fighter many always envisioned he would become. “The records are very nice, but they’re not my focus; my focus is on becoming champion.”

If he keeps on the way he’s been going of late, that’s not an unrealistic possibility.

During his current six-fight winning streak, the powerful striking, deft submission skills, and nose for finishing fights that Oliveira has exhibited throughout his career has remained front and center, but the frenetic energy that permeated his previous appearances has been replaced by a more measured, more methodical approach inside the cage.

It’s like the inevitable scene in every superhero movie where the character finally learns to harness and control his or her powers. It’s taken some time, but “Do Bronx” seems to have finally put it all together and it’s turned him into one of the most intriguing members of the lightweight class, with this weekend’s showdown with Lee standing not only as one of the best fights of the month, but one of the most compelling battles to hit the Octagon so far this year.

Like Oliveira, the 27-year-old Lee is a talented, but at times frustrating young fighter with boundless potential and a handful of high-profile stumbles on his resume. Just when it seemed like he too was destined to be someone who was never quite able to put it all together and establish himself as a true contender, “The Motown Phenom” walked into Madison Square Garden and banished Gregor Gillespie from the ranks of the unbeaten with a walk-off high kick knockout at UFC 244.

Just as Oliveira’s string of stoppages over the last two years prompted observers to reconsider their evaluations of the still surprisingly young veteran, Lee’s blistering finish of Gillespie in November did the same.

Now the two will fight to decide which one them will continue moving forward towards their shared goal of holding UFC gold.

And if Oliveira breaks a couple more records along the way, that’s a nice little bonus.

“I am very happy with the fight against Kevin Lee,” said Oliveira. “Being able to fight in the main event in Brazil makes me very happy.

“Records are nice, but my dream is the title. The belt is everything.”