Charles Oliveira: Beyond the Numbers

"Hatsu is a great fighter. This will be a fun fight for the
fans." - Charles Oliveira 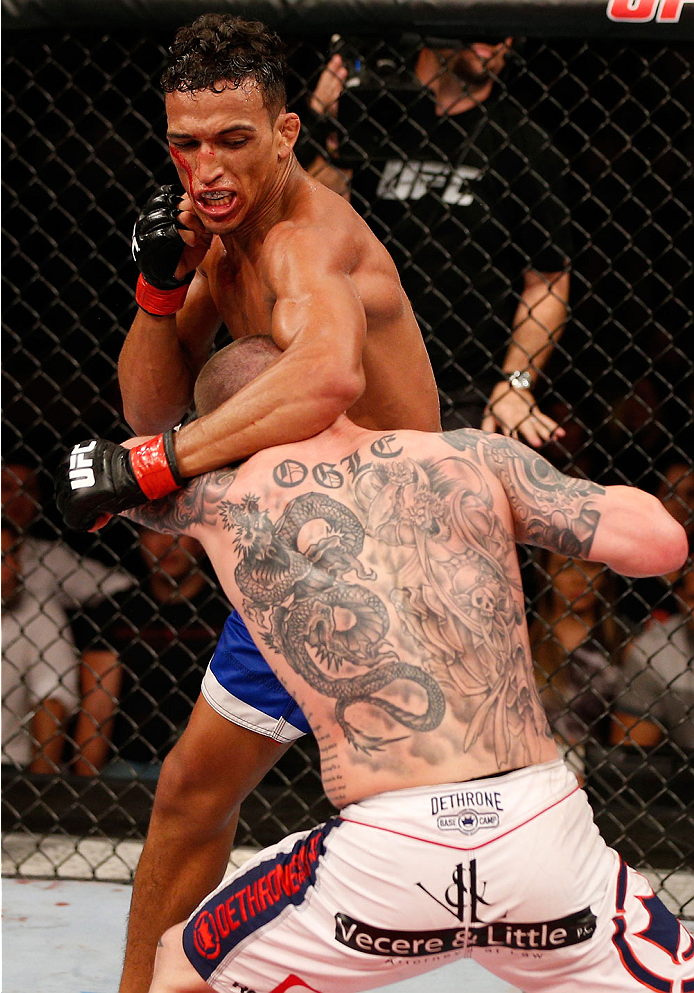 There are times when a fighter’s record doesn’t paint a complete picture. Though it lists their recent appearances and the outcome of those bouts, there is context and information that exists beyond the end result.

Charles Oliveira has stepped into the Octagon 10 times. He’s 5-4 with a no contest to this point, leaving him one win on the happy side of average under the UFC banner, a record that doesn’t exactly jump off the page at you upon first glance.

Perhaps more than any fighter on the UFC roster right now, the Brazilian featherweight falls into that “there is more to it than wins and losses” category.

Oliveira entered the UFC as a lean and lanky 19-year-old – an indelible smile on his face, a puff of curly hair on his head and a frenetic pace to his performances in the cage. After two submission wins to push his record to 14-0, the hyped and hyperactive newcomer was thrown to the wolves.

Over his next seven fights, “Do Bronx” went 2-4, picking up the previously mentioned no contest result against Nik Lentz during that two-and-a-half-year stretch as well. His wins came against opponents that have since been released by the organization, a fact some pundits put too much emphasis on, especially when who he lost to during that time is of far greater significance.

Losses to Jim Miller and Donald Cerrone sandwich the no contest with Lentz, while setbacks against Cub Swanson and Frankie Edgar followed featherweight victories against Eric Wisely and Jonathan Brookins.

Every member of that quartet currently sits in the Top 10 of their divisions – Miller and Cerrone at No. 7 and No. 6 respectively at lightweight, Swanson and Edgar at No. 4 and No. 2 in the 145-pound ranks. Combined, those four fighters are 38-11-1 in the UFC and Oliveira faced them all before his 25th birthday.

His UFC record doesn’t look as shiny as some and keeps him out of the featherweight rankings, but there is more depth to what Oliveira has done to date than some fighters with fewer ticks in the loss column, and the experience the 24-year-old talent has accumulated to this point will continue to pay dividends going forward.

“That was my biggest fight,” Oliveira says of his UFC 162 encounter with Edgar. While the former lightweight champion took home a unanimous decision win, the young Brazilian acquitted himself quite well, reminding many of the elite upside many saw in him during his first two appearances in the Octagon.

“I got to fight the champ. I know I can compete with anyone in my division. I learned a lot in that fight, and have become a much better fighter because of it.”

Seven months later, that improvement was evident when Oliveira shared the cage with scrappy Ultimate Fighter alum Andy Ogle. After threatening to finish in the first, the consistently aggressive jiu-jitsu fighter continued to pursue the submission throughout, eventually catching “The Little Axe” with a triangle choke midway through the final frame.

The victory moves the Brazilian ahead in the division and into a match-up with former top contender Hatsu Hioki, one of the four fights that comprises the main card of Saturday’s debut event in New Zealand headlined by James Te Huna and Nate Marquardt.

While the Japanese veteran has failed to live up to the lofty expectations that accompanied his arrival after years of dominating the featherweight ranks in Shooto and World Victory Road, Hioki is coming off a solid win over Ivan Menjivar and has been his best when he wasn’t required to travel to the United States.

Such is the case this weekend, and Oliveira believes the pairing will produce an entertaining bout for the fans that fill Vector Arena in Auckland and that tune in on UFC FIGHT PASS.

“Hatsu is a great fighter,” offers Oliveira of his 30-year-old adversary, who boasts wins over the likes of Mark Hominick, Marlon Sandro and the legendary Rumina Sato. “This will be a fun fight for the fans.

“I like to take chances,” continues the energetic Brazilian, who has earned a finish in 16 of his 17 career victories. “This will be a very exciting fight, and the fans should see some new things from both of us.”

And at this point, continuing to develop and add to his arsenal is key for Oliveira.

He’s already been thrown into the deep end in two of the deepest, most competitive divisions in the UFC and managed to keep his head above water. There have been struggles and setbacks, but it’s hard to identify another fighter under 25 years old that would have fared any better under similar circumstances.

Becoming successful is a process that takes time and involves many moving parts, both inside and outside the cage. Nearly four years into his UFC tenure, “Do Bronx” is doing just fine, whether his record inside the Octagon reads that way or not.

“I started my career with UFC at 19 in the (lightweight) division,” begins OIiveira, who doesn’t reach the quarter century mark until the middle of October. “I compete now in the (featherweight) division. I think when my body fully matures I might go back to 155 pounds, (but) now it’s nice to be the tallest and biggest in my division.”