For Charles Jourdain, It's Never Over

Flip through the Instagram account of French-Canadian featherweight prospect Charles Jourdain and you’ll find the same hashtag affixed to most of his posts — #JamaisFini, which translates to “never finished.”

The idea that the 25-year-old fighter will always be under construction took root last year, when, for the first time in his five-year career, the native of Beloeil, Quebec failed to register a victory, which hit a little harder given that he came into the year riding high off the biggest win of his professional career — a second-round stoppage win over Dooho Choi in Busan, South Korea in December.

“I had the split decision loss against (Andre) Fili and that’s where that mindset really started,” said Jourdain, who faces off with newcomer Marcelo Rojo on Saturday’s prelims. “I’m so used to winning all the time on the professional circuit, and then I start reading all those comments online about ‘He’s one loss away from getting kicked out’ and ‘he’s this, he’s that.’

“It’s normal that people don’t pay respect to everything I’ve achieved,” he continued. “I joined the UFC at a fairly young age, won two titles in TKO, which is the same title Georges (St-Pierre) won, so I felt discredited, but I thought, ‘Okay, it’s not over.’ It’s never over and it’s going to be like that until the end.” 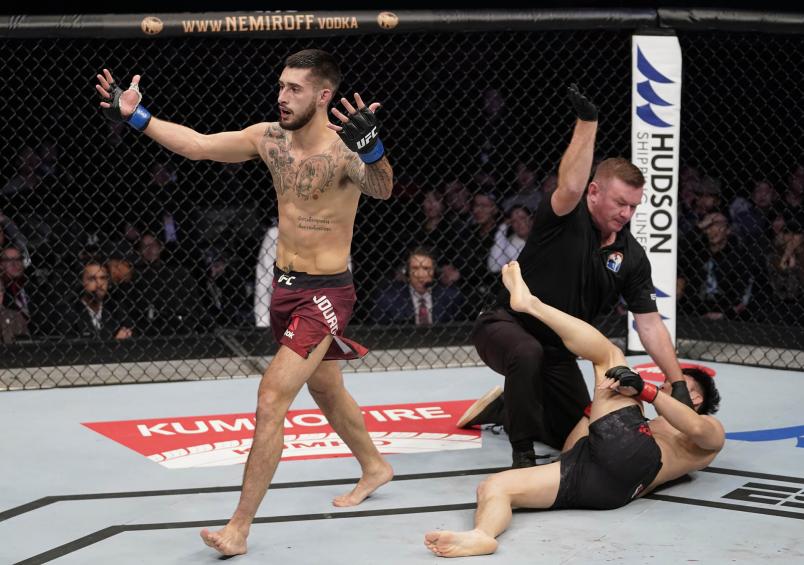 Even though the mindset began taking root following his loss to Fili in June, it didn’t really become a central tenant to his approach and a catalyst for actual, meaningful change until the fall.

In early October, Jourdain ventured to Fight Island to take on Australian Josh Culibao, and after 15 minutes, the judges couldn’t agree on a winner.

One official saw Jourdain winning all three rounds. The other two gave Culibao the first and second, with one awarding the Canadian a 10-8 score in the third resulting in a split draw with scores of 30-27, 28-29, and 28-28.

It was a disappointing outcome and the capper to a frustrating year inside the Octagon for the engaging, charismatic, and entertaining Jourdain, but ultimately something he’s come to appreciate.

“It was hard because I’m so used to winning, getting all that attention, getting gifts from people and sponsors and everything, and now everyone has turned their backs on me because of that,” he admitted. “My circle became a lot smaller. 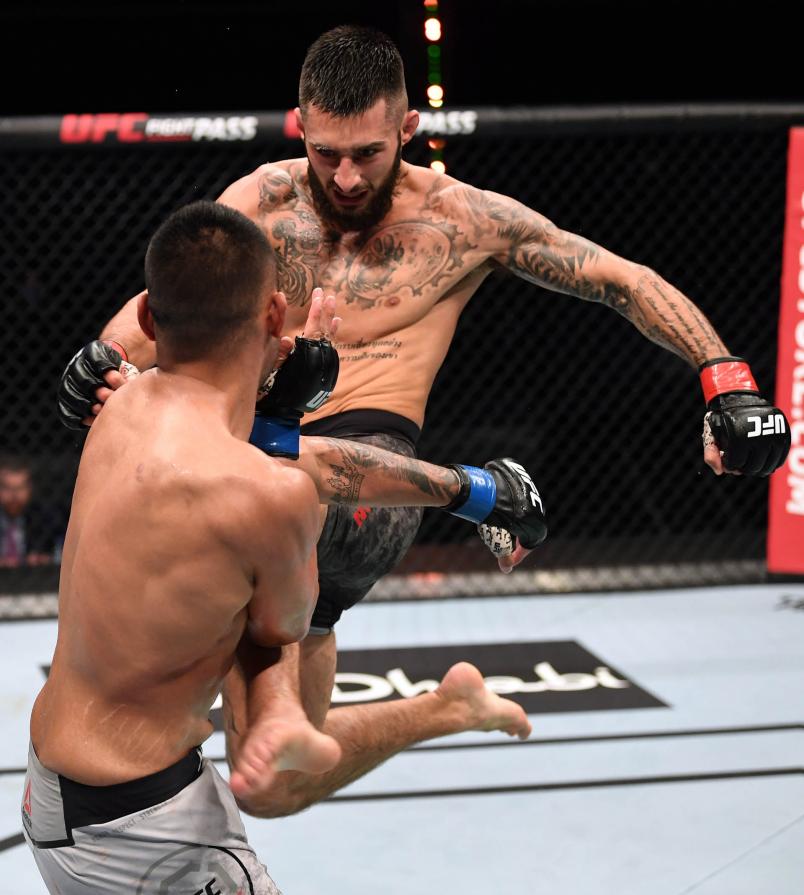 “I’m very glad it happened like that because I see how much of a privilege it is to fight in the UFC. I know it’s something that is not going to last forever if I keep going down that road of not performing the way I did previously.

“I’m glad I went through that bad year because I’m stronger and I care less about people’s judgment, and that’s a good thing,” he added. “It’s never over, even when people say, ‘Oh, you’re done!’”

One of Jourdain’s biggest takeaways from his winless campaign in 2020 was that he needed to invest time and resources into becoming a more complete athlete and becoming stronger.

He noticed the difference between he and Fili when the two shook hands during Fight Week and again once they were inside the Octagon. Following the bout, the Team Alpha Male fighter and his wrestling coach, former UFC lightweight Danny Castillo, approached Jourdain to offer some veteran guidance.

“After the fight, he and Danny Castillo came by and said, ‘You had a big lack of physicality, but I came into the UFC young like you, so give yourself a year or two and you’re going to develop that grown-man strength,’” recalled Jourdain, who went 9-1 on the regional circuit before arriving in the UFC.

“Guys like me and Chase Hooper have a small frame and it takes time to develop,” he added with a laugh. “Now I’m working with a professional trainer who is working with (light heavyweight boxing champion) Artur Beterbiev and many good fighters from Quebec. I’m very glad because he’s helping me develop the athletic side. 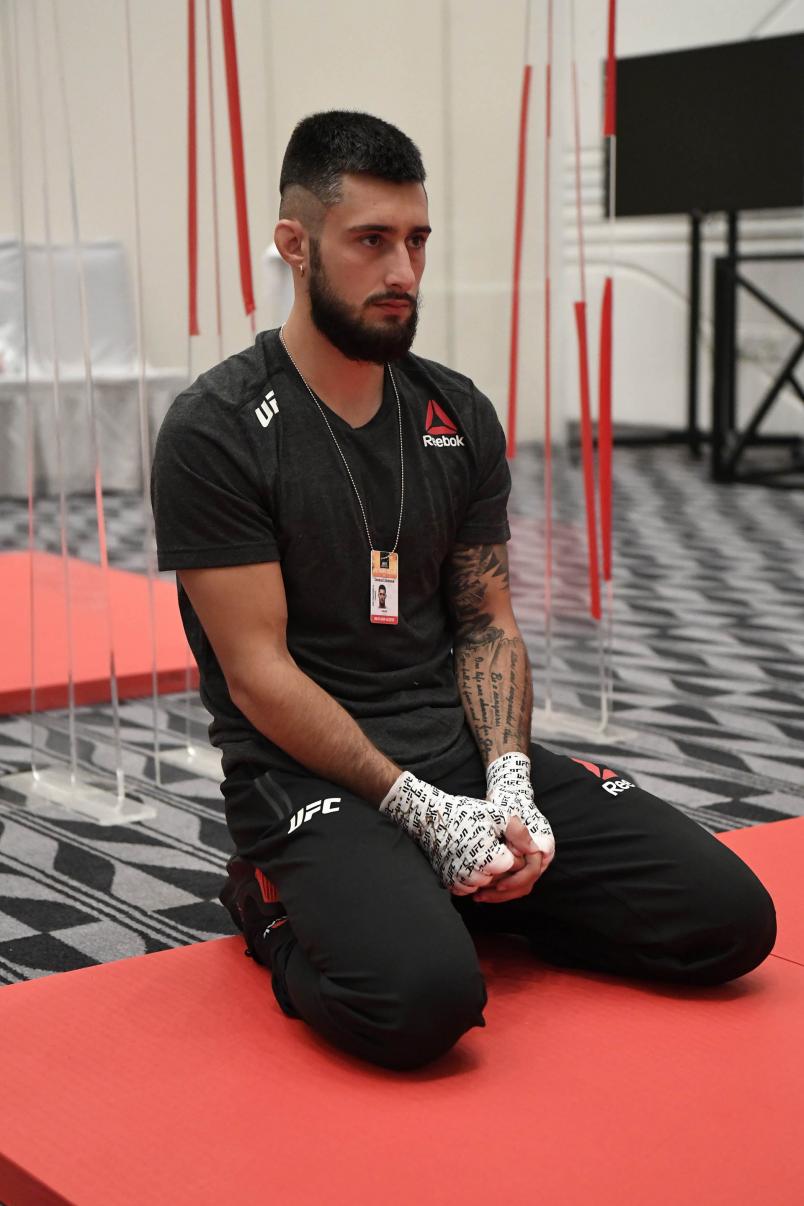 “I thought that because I could run fast and jump high, I was an athlete, but I realized I was nothing like an athlete when it comes to Olympic lifts, and now I’m feeling that grown-man strength. The weights I’m lifting keep getting higher and I feel more powerful, more confident; I can do more rounds, and I’m more explosive.”

In addition to bringing about a physical transformation in Jourdain, his disappointing 2020 campaign also helped re-affirm to the talented featherweight that making a living by stepping into the Octagon and testing himself against another man is how he wants to spend his days.

“I think there are different types of people in this world and the type of person you are will influence the type of fighter you are,” began Jourdain, who was initially slated to face Steve Garcia on Saturday evening before the former Contender Series contestant was forced out due to injury and replaced by Rojo. “There are guys who are very competitive, like Khabib — 29-0, never lost, barely lost a round - and he got big from that. Then we have a guy like Dustin Poirier, who had so many ups and downs, but kept learning and fought his way back to a title again.

“I grew up in a very privileged home — I never grew up with a lot of hardships, so I had all the reasons to stop when I faced adversity, but I never did, which is where ‘J’amais fini’ comes from.

“Of course, it’s going to be hard for me because of the lack of intense life I had,” he added. “I’m glad now that I’m living through these struggles because I think it builds character and I can work my way up to the Top 15, Top 10 before I face other hardships like I did before.”

Armed with a new outlook, improved strength and athleticism, and a drive to get back to his familiar winning ways, Jourdain is excited for Saturday’s contest and intent on making sure that when he leaves the Octagon this weekend, his gas tank is empty.

“I’m tired of finishing a fight knowing that I could have done more and that I still have gas in the tank, wondering ‘Why don’t I use that gas?’” he said. “(As for the fight), it won’t lack any action and I think it will be who has the most heart, who can stand and bang, and I’ve never lost a fight like that.

“When it’s time to do a cowboy fight — shoot first and ask questions later — that’s the kind of fight I like.”