Charles Jourdain Is Connected To The Present

All Smiles And All Business, Charles Jourdain Is On A Mission To Be Himself Against Julian Erosa At UFC Fight Night: Brunson vs Till
By Gavin Porter, On Twitter: @PorterUFCNews • Sep. 2, 2021

These days, it’s impossible to wipe the smile off Charles Jourdain’s face.

The 25-year-old Canadian has found his groove, both physically and mentally, heading into UFC Fight Night: Brunson vs Till. Finding this zone of positivity and happiness was something that “Air” Jourdain struggled with during his first few fights in the UFC.

His rocky fights with Desmond Green, Andre Fili and Josh Culibao taught him some valuable lessons and forced him to reconsider the way he approaches his game. Jourdain went back to the drawing board, and it paid off in the form of a big-time knockout win against Marcelo Rojo.

“I knew he was going to come out and do fireworks because when you get to the UFC you want to prove yourself and that’s why I was little bit gun-shy in round one and round two,” Jourdain told UFC.com. “Then in round three, I was like, ‘OK, it’s my turn,’ and I got the finish 20 seconds before the bell. Out of all the guys I fought, Rojo was the most fun guy I was around. Even at the weigh in and all that, I felt like this guy genuinely loves fighting, and the fact that he loves it that much, it’s not that stressful. Sometimes bad emotions come from stress or putting pressure on yourself.”

"I'm not pressed. I'm going to take care of [Julian] Erosa on Saturday and we'll see where we go from there."

Charles Jourdain (@JourdainAir) explains why he isn't worried about the rankings and what he expects from Julian Erosa at #UFCVegas36 🔊⬆️ pic.twitter.com/U41KRTuyeq

Jourdain admittedly felt that pressure in his other fights and is sure that his own thoughts have been his biggest adversary come fight night. That’s why Jourdain is smiling during fight week, soaking in each media obligation, and chopping it up with everyone that he interacts with. Being in the moment allows him to fight to the best of his ability.

“My career before arriving to the UFC, I was the TKO double champion and it passed like this,” Jourdain snaps his fingers before continuing. “What I hate about that is when you win, it’s always on to the next, on to the next, and I was only happy when I was winning. If I lose, then I feel like s***. If you feel like s*** then everybody around you feels like s*** because it’s an aura thing. In 2020 and 2021 I learned to be happy all the time, no matter the outcome of my job. At the end of the day, the most important moment of my life is right now.”

That’s why Jourdain didn’t flinch when he found out his featherweight showdown with Lerone Murphy was cancelled and that UFC vet Julian Erosa would be filling in. All Jourdain did was roll with the punches. 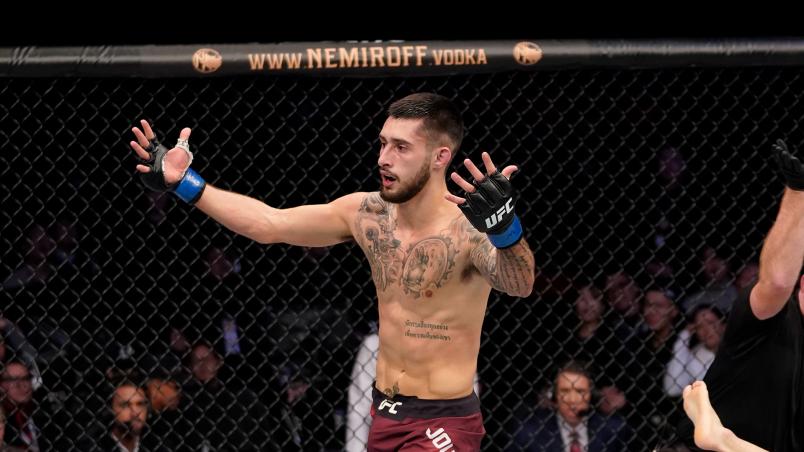 Charles Jourdain of Canada celebrates after knocking out Dooho Choi of South Korea in their featherweight fight during the UFC Fight Night event at Sajik Arena 3 on December 21, 2019 in Busan, South Korea. (Photo by Jeff Bottari/Zuffa LLC)

“We need to adapt. The best fighter, the best person in the world in whatever you do, if it’s a fight or whatever job you have, the important thing is to adapt with the outcomes that aren’t supposed to be there,” Jourdain said. “I just changed my opponent a week ago. I was fighting a 5-8 righty and now I’m fighting a 6-1 striker, so we adapt. I don’t mind, we’re good with that.”

Jourdain can’t help but be hyped to face Erosa. He watched “Juicy J” compete on The Ultimate Fighter against Artem Lobov and seen him battle through plenty of adversity. It’s a matchup that Jourdain hopes will feature some intense striking and help bring out the best in him.

“He’s a striker…but he said he’s going to wrestle, and I was like ‘Nah, why would you do that?’ You’re a striker, why would you do that? I know he wants to win, so, at the end of the day, I respect that, but I’m like, ‘Let’s have another good striking battle so I can get my hands on a bonus,’ but we’ll see,” Jourdain said. “What changed his mind from being this fire fighter was his last knockout. In his last couple fights he got dropped a lot and now he’s facing a 25-year-old kid that jumps everywhere and hits with a lot of power.

“I think I have a lot of power by having a 100 percent finishing ratio, so I’m sure he takes that into consideration and maybe he’s going to try to take experience into his hand and try to use that as an advantage by maybe being more of a smart fighter, a more calculated fighter, but you can’t build a whole career being a crazy fighter and now being calculated for one fight. So, we’ll see how he’s going to play it.”

Regardless of how Erosa chooses to mix it up with Jourdain, it’s no secret what kind of fight Jourdain is looking to have inside the UFC APEX. He’s looking to be flashy and to put on a show.

“I just have to be myself and be honorable toward my fighting style. Don’t be gun-shy, have the most fun, jump on the cage, do spectacular stuff and perform the way I perform normally,” Jourdain said. “I owe it to myself.”