Charles Johnson Wants To Be Meaner

Flyweight Charles Johnson Steps Into His Second UFC Bout At UFC Fight Night: Lewis vs Spivac Hoping To Secure His First Win Inside The Octagon
By Maddyn Johnstone-Thomas, on Twitter: @MaddynThomas • Nov. 18, 2022

Charles Johnson’s UFC debut didn’t go as well as he would’ve hoped, falling to Muhammad Mokaev via unanimous decision. But making it to the UFC and fighting inside the O2 Arena in London is something special. Despite all that, when Johnson reflects back on the time overseas, the most memorable thing from that fight was losing.

Just like winning, losing is also memorable. Johnson sat on the loss, reflected on it, and got right back to work in preparation for his fight against flyweight Zhalgas Zhumagulov. It’ll be his first time fighting in the UFC APEX and it’s something he is looking forward to.

“I'm excited for this opportunity,” Johnson told UFC.com. “I'm very excited about coming in, fighting in the APEX. A lot of people don't like fighting here, but I think I'm going to thrive here and just really set the tone for next year.”

The biggest change that Johnson hopes to implement in his fight against Zhumagulov this weekend is his mentality. Outside of the cage, Johnson describes himself as a humble, nice, and respectful guy, but that’s not how he wants to be inside the Octagon.

He wants to go in there and remember who he is.

“I got to remember to get in there, turn that killer instinct on, be a little bit meaner, a lot meaner. Don't be so nice,” Johnson said. “Go in there and make that paycheck because you got dreams, aspirations bigger than this fight.” 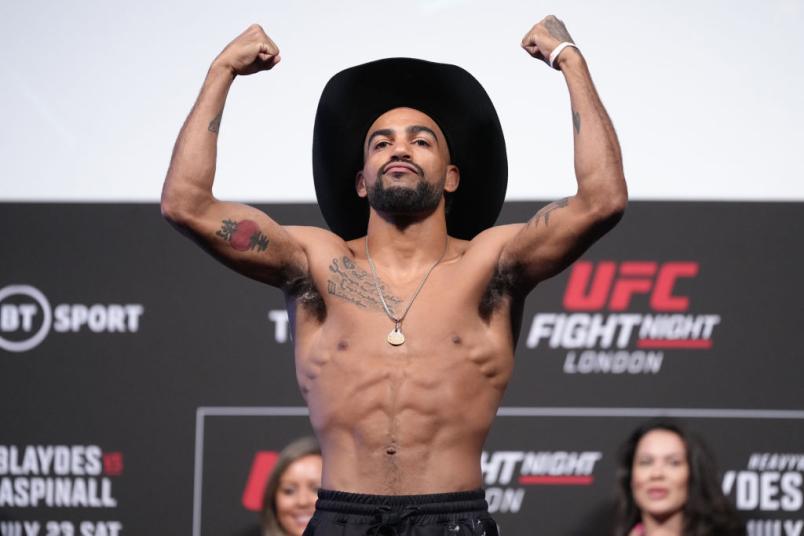 Charles Johnson poses on the scale during the UFC Fight Night ceremonial weigh-in at O2 Arena on July 22, 2022 in London, England. (Photo by Jeff Bottari/Zuffa LLC)

It’s a bit of a transition to fight in an arena with thousands of fans cheering throughout your whole fight to fighting in a space with a hundred people in it. Johnson explained that the whole vibe surrounding this fight week is different compared to things in London. In London, he was getting used to the motions of fight week and taking everything in for the first time. Now, in his second fight week under the UFC banner, he knows what to expect and enjoys seeing familiar faces throughout the week.

Last time around he wasn’t feeding off his energy and it’s something that he plans to do this time around.

“(I’m going to) talk, speak, dance, enjoy what I'm doing like I do in the gym, like I've done in many other fights,” Johnson said. “That fight I was in my head a lot. I didn't say anything. I didn't smile. I didn't do anything. This fight, the only energy I'm feeding off is my own. I'm putting it out and I'm reciprocating through to myself and everybody else gets to enjoy seeing it.”

His opponent, Zhumagulov, has been in the UFC since 2020 and has a 1-4 record inside the Octagon. He comes in the matchup looking to get back in the win column after dropping back-to-back fights against Manel Kape and Jeff Molina.

Zhumagulov has never been submitted in his career and has only been knocked out twice. His durability is something that caught Johnson’s eye when asked about his skill set.

“He is here for a reason and he's going to be fighting his best fight, in my opinion,” Johnson said. “I'm just ready to go out there, do what I do. He's a very durable guy. He's always there bell to bell. He's always pushing and trying to win the fight. He never quits, so it's going to be on me to break him and break his will, which is what I plan on doing.”

The 31-year-old has his sights set on a finish, whether it be a submission or a KO. He believes that as long as he stays true to himself and remains disciplined, he’ll come out victorious and secure his first UFC win. Johnson explained that getting a victory would mean he’s officially in the UFC and he hopes to follow in the footsteps of peers like Michael Chiesa and Cub Swanson.

“It's guys that I look up to that I've seen on the regional scene, Michael Chiesa, Cub Swanson, seeing him there at LFA and they're excited about me, but I'm thinking about it and these guys have had long careers and I would love to be in that same room with them energy wise, and just do the same things,” Johnson said. “If I'm more successful in my career, I would love that. But what matters most is getting the win and I can officially say I'm in the UFC.”