Charles Oliveira Lets His Fighting Do The Talking

Riding A 10-Fight Winning Streak, Lightweight Champ Charles Oliveira Knows To Let His Actions Speak For Him
By E. Spencer Kyte, on Twitter @spencerkyte • May. 2, 2022

Mixed martial arts is littered with familiar axioms that competitors, commentators, media, and fans frequently spout. You hear them every broadcast, in every other interview, and rarely, if ever, does anyone seem to stop and investigate whether they’re fair or valid or even make sense.

Take the ever popular “You’re only as good as your last fight” — a phrase uttered by countless practitioners and pundits, usually when someone is coming off a tepid performance in a victory, but most often reserved for an athlete looking to rebound from a loss. It sounds good, and conveys being focused on the here and now, rather than reputation and past accomplishments, but no one ever really judges a fighter exclusively by the last fight.

Take lightweight champion Charles Oliveira, who defends his title this weekend in the main event of UFC 274 on Saturday against Justin Gaethje, for example.

His fight against Dustin Poirier at UFC 269 ended in a third-round submission victory for the tenured Brazilian, giving him his first successful title defense, his tenth consecutive victory, his 15th submission win and 18th finish inside the Octagon, both of which are records, and a Performance of the Night bonus, to boot. Judging him on that performance and that performance alone offers no room for criticism or questioning — it was a dominant showing against a world-class challenger, and Oliveira continued to shine.

Yet as he readies to face Gaethje this weekend, a familiar narrative and talking point — that he struggles in moments of adversity — continues to engulf the champion.

“Oh, critics always have something to say,” said Oliveira when asked about the persistent critique of his will and resolve. “I like to let my actions talk for themselves.   What people write about after I fight is what they write.”

The idea that the 32-year-old standout has moments when he wilts is rooted in evidence, as there were times early in his career when the Brazilian was terrific at being the hammer, but not the nail. There were bouts where he would start well, but as soon as the momentum shifted, an avalanche ensued, burying Oliveira under a sheet of unstoppable offense headed in his direction.

But Oliveira has won 10 straight, earning finishes in nine of those outings, and the last time anyone could possibly question him was nearly six years ago when he faced Anthony Pettis in Vancouver, before he’d returned to the lightweight division, split his first two fights back in the 155-pound ranks, and embarked on the incredible run that has carried him to the top of one of the deepest, most competitive divisions in the sport.

What’s more is that there are more recent examples that disprove the long-held and persistent idea about Oliveira and adversity.

“I have been fighting for a long time,” said the lightweight champion, who is one 10 fighters with 20 or more victories inside the Octagon and will become the ninth fighter to make 30 appearances inside the UFC cage when he crosses the threshold on Saturday night at Phoenix’s Footprint Center. “Fighting is dealing with adversity, and my experience in it really helps me in every situation.”

He showed that in his title-winning bout against Michael Chandler just under a year ago at UFC 262.

Less than a minute into the fight, Chandler touched Oliveira’s chin with a left hand that prompted the Brazilian to look for a takedown. On the entry, he left his neck exposed and got caught in a guillotine choke in the center of the cage. While he eventually extricated himself from the position and took Chandler’s back, the compact contender defended well, swam through into top position, and returned to his feet.

Bleeding from a cut on his right eyebrow, Oliveira eventually stood up, but was promptly greeted by another left hand, followed by a right to the temple that clearly dazed him, and then another that left him desperately looking for shelter and a way to escape the torrent of blows raining down on him.

Chandler spent the majority of the second half of the round landing good shots on Oliveira and generally bullying him.

Yet nineteen seconds into the second round, the fight was stopped, and Oliveira erupted in celebration.

The guy with the questions about his ability to navigate adversity marched out of the corner to start the second round, floored Chandler with a left hook as they stood in the center looking to trade shots, and ended things seconds later with a series of unanswered left hooks.

Oliveira’s championship-winning turn was irrefutable evidence that he could deal with adversity, and just in case people weren’t sold on a single display, he followed up by working through a couple dicey exchanges early in his fight with Poirier, as well.

Yet heading into Saturday’s contest, Gaethje and others are continuing to question whether the reigning, defending, undisputed UFC lightweight champion is capable of working through rough patches.

“Again, I like to let my fights talk for me,” Oliveira said again. “I have won my last 10 fights finishing all but one, but the most important fight is always the next fight. I am focused on this fight, and will let this fight talk for me.  What people say afterwards is just talk.

“Actions always beat talking about something,” he added. “I am working on showing people my talent with actions in the Octagon, because I know the critics will always be talking.”

For the champion, it’s all about keeping things simple, focusing on the things that he can control and that truly matter most — preparing his weapons for battle, recognizing the challenge in front of him, and being ready for whatever comes his way this weekend.

And while the stakes are certainly higher now than ever before, he’s also quick to keep that in perspective. 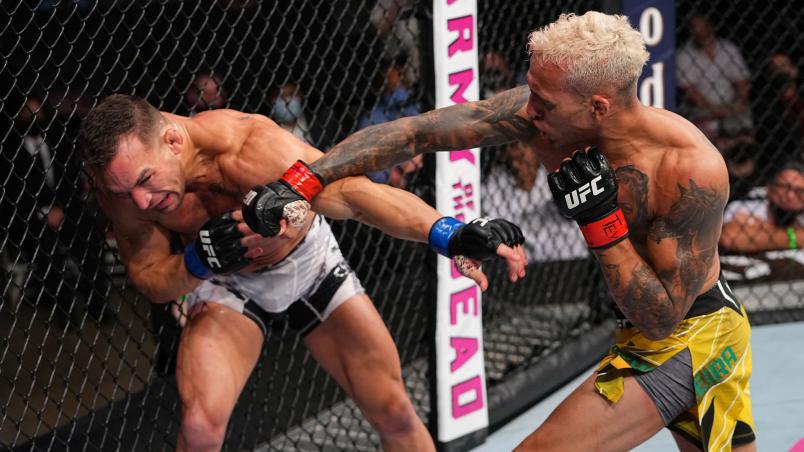 “Chandler, Poirier, and Gaethje are all great fighters,” he said when asked how his experiences last year have helped ready him for Saturday’s showdown with Gaethje. “At this level, you have to focus and be ready for everything, and I always train very hard to be ready for everything. I am focused on putting on my best performance on in the cage.

“Fighting has always been fun for me,” he continued. “Of course, everything before (these) fights is much bigger and intense, but once the fight starts, it’s just another fight.”

Saturday is another major moment for Oliveira, but he’s shined bright in the same position the last two times he’s been here, answering any nagging questions about his willingness to battle through adversity each time with an emphatic, undeniable “Yes” both times.

If you truly are “only as good as your last fight,” then Oliveira is unquestionably the best lightweight in the UFC and one of the very best fighters in the sport today, and it shouldn’t surprise anyone if he proves that again this weekend.