Charles Oliveira: The King Without A Crown

Despite Vacating The Lightweight Title, Charles Oliveira Leaves Little Doubt That He Is The Best Lightweight In The World
By Zac Pacleb, on Twitter @ZacPacleb • May. 27, 2022

Charles Oliveira might not have UFC gold in his possession at the moment, but it’s hard to argue against his status as the best in the world, considering his run of form and the results he continues to produce.

Eleven wins in a row, 10 finishes along the way, including victories over Michael Chandler, Dustin Poirier and Justin Gaethje in championship fights. The most recent over Gaethje came with the caveat of Oliveira missing weight and therefore forcing him to vacate his title – a mishap he and his team still dispute.

Nonetheless, Oliveira went out and performed like the champion with what is now his signature pattern of performance. Despite getting rocked and dropped, Oliveira flipped the script, imposed his will and finished the night with his hand raised once again. 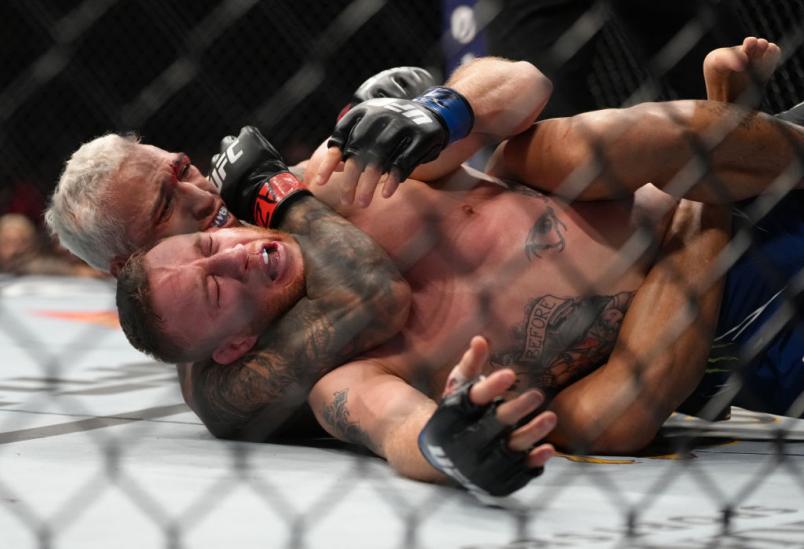 PHOENIX, ARIZONA - MAY 07: (L-R) Charles Oliveira of Brazil secures a rear choke submission against Justin Gaethje in the UFC lightweight championship fight during the UFC 274 event at Footprint Center on May 07, 2022 in Phoenix, Arizona. (Photo by Jeff Bottari/Zuffa LLC)

“We're still trying to process everything that's happened,” Oliveira told UFC.com at the UFC Performance Institute. “It's sad because I know I made weight, but we're happy to know our mind is still bulletproof and for being able to put on a performance like that, walk out with the win and show that the lightweight champion's name is Charles Oliveira. Nobody can take that away.

“The lightweight champion's name is Charles Oliveira, and he's here.”

What To Watch On FIGHT PASS This Weekend

Oliveira’s fervent conviction in his holding of the belt is well-taken, mainly because his last three stoppage wins shut the door on any arguments for anyone else at the top of the division. 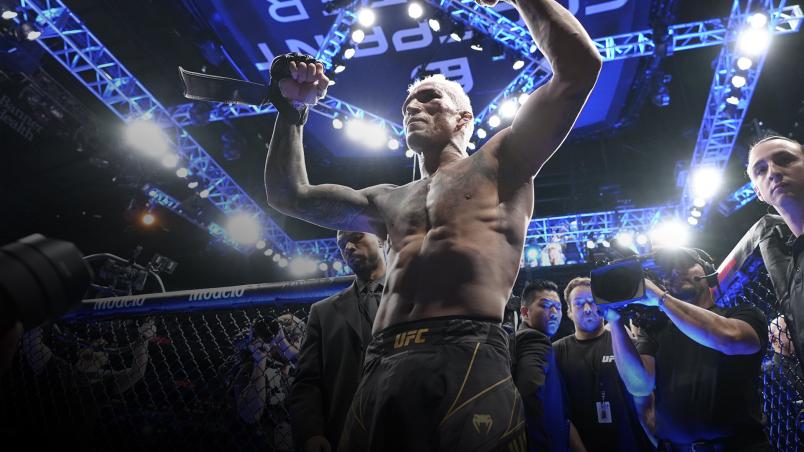 Perhaps what adds even more weight to Oliveira’s victories is the fact that his opponents have appeared one or two more clean strikes away from halting the Brazilian. Chandler earned a 10-8 first round before Oliveira steamrolled him in the second to win the belt. Poirier landed some of his best shots early, only to succumb to Oliveira’s grappling supremacy. The same went for Gaethje. Oliveira’s apparent vulnerabilty – whether that’s founded from his past losses or otherwise – creates an emotional tension that makes his victories all the sweeter, and his ability to make these dramatic comebacks on a regular basis of late is a point of pride.

“That's the spirit in our team: to move forward and constantly look for the win,” he said. “This is a contact sport, so you get hit, but then you get up. It's not about how much damage you can inflict or take, but how much you want it. How much you need that victory, you know? That's the focus.”

After Oliveira secured his spot as the No. 1 contender at UFC 274 in Phoenix, Arizona, he traveled to Las Vegas to support his Chute Boxe Diego Lima teammates in their fights, including a victorious Allan Nascimento.

“I think our team is gaining great momentum,” Oliveira said. “I win, the team gets happy and keeps winning and so on. Our team is happy. We've been growing and evolving every day.”

Despite the disappointment of losing his title, Oliveira continues to carry a champion’s aura – less of an untouchability and more so a confidence built through the ups and downs of a lifelong fighter.

That well-earned composure has only helped him in the biggest fights of his life, and it adds yet another piece to the lethal puzzle that makes up “Do Bronx.”

“I'm really happy with everything that's been happening,” he said. “I've been able to read the game well, showing that I truly want it. I've been able to show that. God has been illuminating and blessing me.”

Now back in Brazil, Oliveira said his main goal is to rest with his family as he and his team look toward what comes next. Many point toward Islam Makhachev as the next worthy challenger, although Oliveira did choose to call out the one and only Conor McGregor in his Octagon interview. 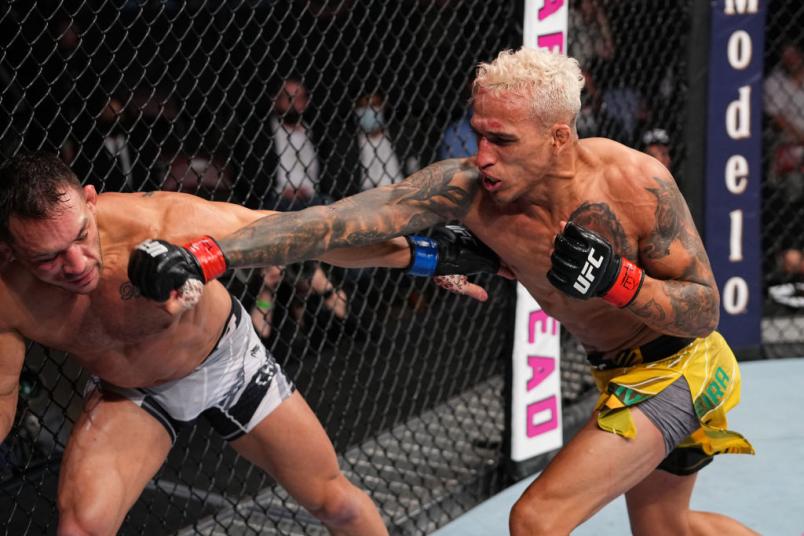 HOUSTON, TEXAS - MAY 15: (L-R) Charles Oliveira of Brazil punches Michael Chandler in their UFC lightweight championship bout at Toyota Center on May 15, 2021 in Houston, Texas. (Photo by Josh Hedges/Zuffa LLC)

Regardless of who Oliveira fights for the now-vacant title, it’ll still feel like a defense of his status as the top lightweight in the world. He does have a preference, however, when it comes to where he wants that fight to happen.

“I think I deserve this title (fight) in my home,” he said. “I think the Brazilian people deserve that. I think it'll be in the end of the year, just like it was last year. We just had a fight, so another fight in the end of the year would be great because now I'll be able to go back home, rest with my family, and then come back for the next camp.”

Oliveira is the first to tell you the champ’s name is his own, and while the official throne is empty at the moment, what is certain is the road to the belt goes through Oliveira, and it’s hard to argue for another current reality than the one in which he stands above the rest.