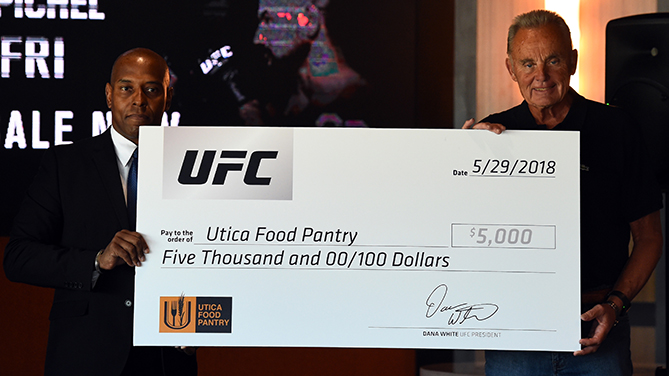 The pre-fight event provided the people of Utica with their first glimpse of the UFC and generated hype for Fight Night.

Friday’s event will be the eighth UFC event in New York State since the legalization of professional MMA in March of 2016. Senator Griffo was a key figure in bringing the sport to New York and couldn’t be happier with the outcome since the sport’s legalization.

“This is a great sport and there are a lot of people who enjoy this sport. And not only from an economic perspective, but also from allowing the athletes to be able to participate across this country,” Griffo said. “I was proud to be a sponsor of the bill here and I think the UFC has really fulfilled its obligations.”

“We’re hoping that this is one of many (events), we’re hoping that the fighters that come in here really love coming here and want to keep on coming back,” Palmieri said. “And we would like to have a championship right here in Utica, New York.”

UFC is encouraging fans to bring canned foods and other non-perishable items to the event on Friday and drop off at one of the marked areas outside of the Labatt Blue Ticket Entrance in an effort to help the Utica Food Pantry. Donate here.

Tune into FS1 Friday at 10PM/7PM EST to witness the UFC’s first trip to Utica.