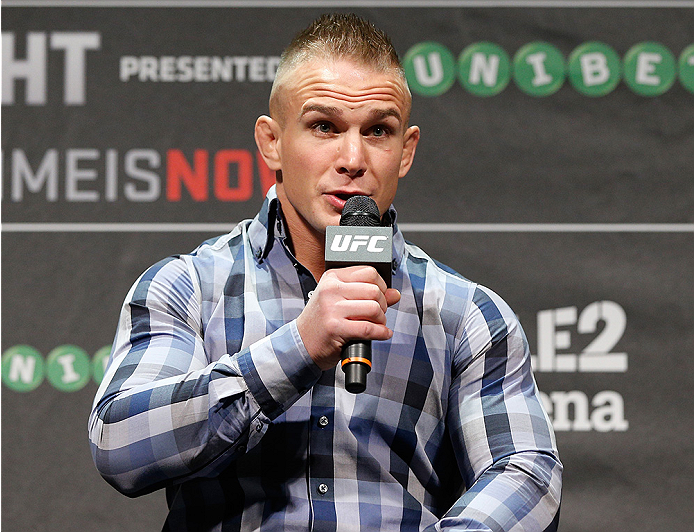 As the only fighter competing on this Saturday’s UFC Fight Night card in Berlin that was born and raised in Germany, Nick Hein is not just going to be a crowd favorite as he steps into the Octagon to face Lukasz Sajewski, he’s likely the one receiving the bulk of the attention and media requests heading into the bout.

For some, that would be a burden better left to other competitors. Not Hein though.

“Believe it or not, sometimes I think that this is one thing for me to be destined for,” he said. “I trained these interviews years ago in front of the mirror when no one was around, because if they would, they’d declare me bonkers. But I have fun doing it, I love it.”

That’s far from the typical response, but it’s not surprising coming from a far from typical athlete. A former police officer and an actor, as well as a decorated judoka with an 11-2, 1 NC MMA record, Hein competes in a sport where some do it because, they can’t sing or dance. Hein probably can sing and dance along with the other things he participates in, but these days it’s all about fighting and making his way up the lightweight ladder in the UFC.

“Everything has changed,” Hein said of his first year in the UFC. “The place I train, the recognition I get. I also quit my Job as a police officer to be able to continue my dream of fighting in the UFC. But the biggest change of all is that I wake up in the morning and am $%^%ing happy.”

“Can I say that,” he asks with a smile, and it’s clear that he’s in a good place heading into his bout against unbeaten Poland native Lukasz Sajewski, a fighter Hein describes as “Maybe my toughest opponent to date - young, dangerous, unbeaten.”

At 31, Hein can still consider himself young in the great scheme of things, wins in five of his last six bouts show that he’s dangerous as well. As for the unbeaten part, Hein lost his “0” in 2011 and then ran off five wins and one no contest, earning him a call to the UFC. In May of last year, he engaged in an exciting three-rounder with the United States’ Drew Dober, winning a unanimous decision. After the bout, he gained a brother-in-law when Dober met and eventually married Hein’s sister earlier this year.

Guess there won’t be a rematch.

“Well, as we both see MMA as a sport - the best in the world - and having had an awesome match together, it doesn´t really affect our relationship in any bad kind of way. The only rematch we would accept would be in EA Sports UFC for PS4, as we’re both game nerds.”

Following the Dober bout, Hein traveled to Texas to make his U.S. debut against James Vick. This time, the three-round verdict went in the other direction, with Vick emerging victorious.

“Losses are good for development,” Hein said. “They make you over think your routine and how to improve. And I changed a lot. The biggest change was to become a member of Team Banter in Tiger Muay Thai in Phuket. This was an eye opener for me.”

So no dark nights in a darkened room thinking dark thoughts of defeat?

“For me, it did not really feel like a loss,” he said. “When you see the fight, you should make your own opinion of that. But it definitely made me think of my situation. Being very focused on my goals, I sat down and figured out what I had to change. It was definitely a process that took time, but it wasn’t a time of depression or anything like that.”

In fact, it may have been a time in which Hein was in danger of making a permanent move to the 185-pound middleweight division.

“I brought candy from Texas worth $300 to help me overcome my sadness,” he laughs. “That included the cost for one extra luggage to transport all the Reese’s, Butterfingers and many more great candies.”

One conversation with Hein and it’s clear to see why he’s so popular at home. And if he can get back in the win column this Saturday and begin chipping away in one of the sport’s toughest divisions, the rest of the world may start tuning in as well. But for the moment, it’s all about Saturday.

“I never dare to make predictions because I truly believe it is all in God’s hands,” he said. “But I can tell you that I was pushed to my limits in this training camp as I never have been before. I am excited for the 20th. I would love to receive all that positive energy from my fans on this date as I experienced last year. It was a thrill.”