Change is No Problem for Ilir Latifi

"I
have been looking forward to this fight and I believe the Irish fans are
as passionate as the Swedish fans, so it will be amazing to fight
there." - Ilir Latifi 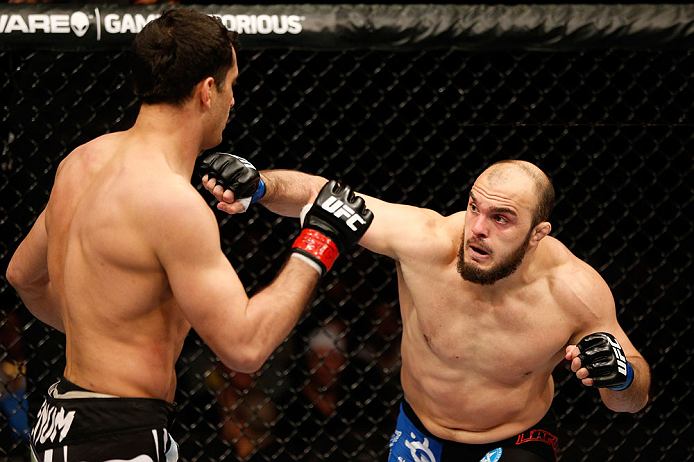 The environment of mixed martial arts is one that can shift in any direction on a moment’s notice. Things go wrong, athletes get hurt, and the opponent a fighter has been preparing for six weeks to face is suddenly replaced by an entirely different competitor, with a vastly different skill set. In order for a fighter in the current era of MMA to be successful, they have to be prepared to handle every break and curve that comes their way. Those that can adjust to these circumstances climb the ladder quickly. But those who stumble are forced to take a much longer path.

Ilir Latifi has been on both sides of this equation, and he’s getting used to working on the fly.
The Swedish powerhouse made one of the more memorable UFC debuts in recent history when he stepped in for his injured teammate Alexander Gustafsson last April. “The Mauler” was slated to face former Strikeforce champion Gegard Mousasi in the UFC’s return to Sweden, but a cut suffered in his final preparations knocked the rangy Alliance MMA fighter out of the bout.

This sent the organization scouring for an 11th hour replacement, and it was Latifi who received the call. Where making it to the UFC and making a lasting impression is something every fighter dreams of, “The Sledgehammer’s” arrival brought a far greater amount of fanfare than a typical debut. The 30-year-old Malmo-based fighter wasn’t making his inaugural showing tucked away quietly on an undercard; he was stepping in against one of the best light heavyweight fighters in the world in the main event of a sold out card in front of his countrymen.

Those conditions could certainly prove to be overwhelming for the majority of fighters stepping into the Octagon for the first time, and the entire experience moved lightning quick for Latifi.

“It was a new and challenging experience,” Latifi said. “The worst part was to lose 13 kilograms in three days, do all the paperwork and medicals, media, PR. I never got the time to focus and think about the fight until I stepped up in the cage.”

While the Pancrase Gym-based fighter would eventually succumb to Mousasi’s attack in the later rounds of the fight, his showing was strong enough to warrant another opportunity from the biggest promotion in mixed martial arts. His bid to make good on a second chance came when he squared off with veteran Cyrille Diabate at UFC Fight Night: Gustafsson vs. Manuwa back in March.

The bout figured to be the classic “striker vs. grappler” affair, but Latifi came into the bout feeling like he had something to prove. Where his debut came on a rapid-fire turn, he had the proper amount of time to prepare for “The Snake,” and wanted to show the UFC fan base what he was truly about. He accomplished just that by finishing Diabate in the first round with a guillotine choke.

“You have something to prove in every fight, but this time I had a full camp and was ready and prepared,” Latifi said. “I knew I was going to perform at another level from my first fight. Cyrille Diabate is a fantastic fighter with a lot of experience. I knew I had to do my level best.”

Where his win over the French striker allowed him to get his feet planted on the light heavyweight roster, Latifi was eager to get back to work inside the Octagon. He was slated to face gritty veteran Tom Lawlor at UFC Fight Night Dublin this Saturday night, but once again the ever-changing ride that is MMA took another sharp turn as Lawlor was forced to withdraw, and a new opponent was slated in his place.

That said, changes in the pre-fight realm are something Latifi has come to expect, and he will square off with promotional newcomer Chris Dempsey when the UFC visits the O2 Arena on Saturday.

He may be facing a different opponent, but Latifi is confident he will still emerge victorious in the matchup.

“My new opponent Dempsey seems to be a wrestler, same as me, but I believe my stand-up is better. I just need to show my stand-up fighting a little bit more,” Latifi said. “This is my third fight in the UFC and each time gives you more and more experience. You know the rituals of how the event works. But I am still loving the moment each time when I walk out to the cage. That is a feeling you can never get used to.

“The fans will see an Ilir that will do anything to get the win. Hopefully I will be able to show the fans my knockout power as well. I have been looking forward to this fight and I believe the Irish fans are as passionate as the Swedish fans, so it will be amazing to fight there.”

With his upcoming bout against Dempsey in Dublin, Latifi will be looking to take another step deeper into the ranks of one of the UFC’s most competitive divisions. The 205-pound weight class has been regarded as the organization’s “crown jewel” collection going back to the days of Chuck Liddell, and has only risen in prominence with the dominant reign of current champion Jon “Bones” Jones.

Nevertheless, Latifi believes he’s uniquely equipped to handle to the massive workload on the road ahead. He trains on a daily basis with former title challenger and current No. 1 contender Alexander Gustafsson, who came closer than any man has come to dethroning the 27-year-old pound-for-pound great when they locked up at UFC 165 last September. Grinding in the gym with Gustafsson has brought Latifi to a place where he knows he’s capable of hanging with the best, and he’s looking forward to proving it as he continues to climb the light heavyweight ranks.

“It is a tough division,” Latifi said. “I know you have to go over the limit to become a top five fighter in that division. I train with Alexander Gustafsson every day and he is amazing and that helps me a lot in my training to have someone at a world-class level in my weight class to spar with. I do feel I belong at the top of that division though, and I will prove it to the fans watching my fight in Dublin.”