Change in confidence a factor for Spicely

If Eric Spicely was a superstitious man, he might put a lot of weight on his return to the country where he resurrected his UFC career a little over eight months ago. But when he steps back into the Octagon in Brazil on Saturday to face Antonio Carlos Junior, it’s to fight, not to make sure he’s wearing the right t-shirt.

“I used to be superstitious a lot earlier in my career where I’d have to come out to the same song and wear a lucky t-shirt,” he laughs. “But (coach) Firas (Zahabi) kind of got me off that and let me know that all that stuff doesn’t matter.”

It was Zahabi and the Tristar team that welcomed Spicely with open arms at the lowest point of his run in the fight game, right after a loss to Sam Alvey last July was going to earn him his walking papers from the UFC.

Yet before he got officially released, the opportunity arose for him to take on Brazilian bomber Thiago Santos in Brazil on short notice. He agreed immediately, but met some resistance from his team.

“A lot of stuff happened,” Spicely said. “My coach told me he didn’t want to come with me and he didn’t think I should take the fight. He thought I should just get cut and go fight in Bellator or World Series, where the competition is a little less stiff. So I ended up leaving and going to Tristar and it was one of the best things that ever happened to me and it really changed my mind set.”

In the space of a trip from Rhode Island to Montreal to Brazil, Spicely went from being a fighter knowing that he was going to be the B-side against a fighter who had been terrorizing his opposition to a confident competitor determined to make the most of his win or go home opportunity.

“At first, I was a little bummed, like, ‘Man, they just want to send me to the wolves. They’re not sending me in there to win,’” he recalled. “And I eventually changed my mindset and looked at the brighter side of this being a huge opportunity to change my career. It opens a lot more doors for me and now I’m in the spotlight if I beat this guy.”

It took Spicely less than three minutes to dominate and submit Santos. He even took home a Performance of the Night bonus for his trouble. 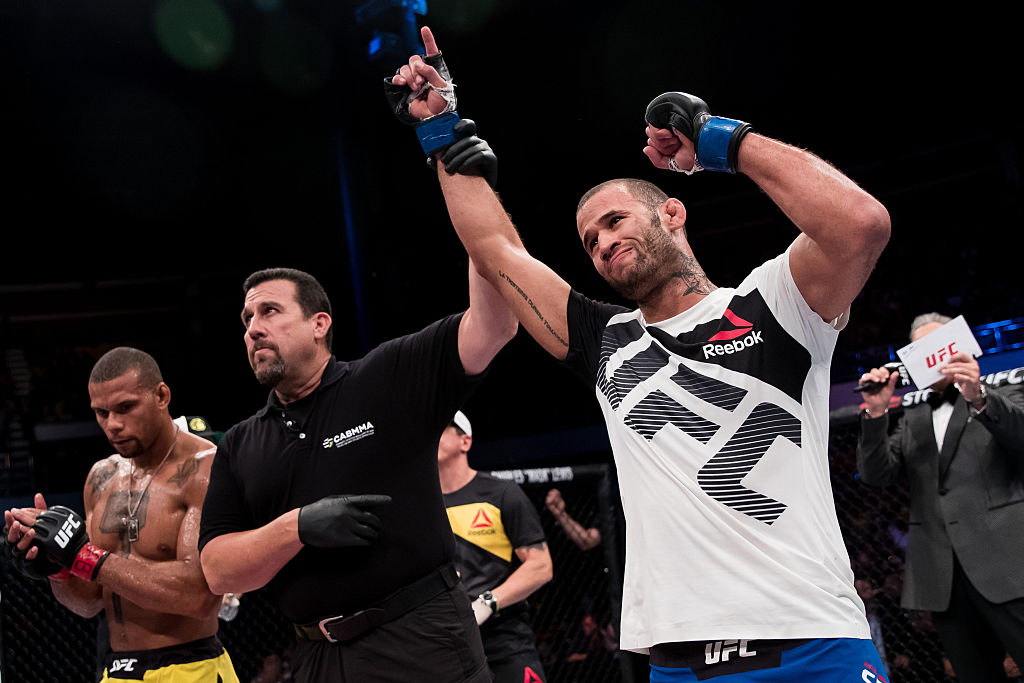 “(UFC vet) Tom Lawlor is a good friend of mine, and I’ve been training on and off with him for the last six years,” Spicely said. “And after the fight, he messaged me and wrote, ‘That’s the Eric I’ve been telling everybody about – just relentless and always pushing for the finish.’ It felt really good to show that because a lot of people hear about you, and then a lot of people don’t deliver. It’s a tough sport. All these guys are very talented, so it’s hard to transition from the regional scene to the big stage doing what you’ve been doing your whole career.”

Four months later, he needed a little over two minutes to finish Alessio Di Chirico, and as he heads into Rio de Janeiro to face fellow jiu-jitsu black belt Carlos Junior, the 30-year-old middleweight isn’t the same fighter he was a year ago. Today, Eric Spicely is a dangerous and confident man.

“I can honestly say that in my Sam Alvey fight, I wasn’t very confident,” he said. “I don’t know what I attribute that to. A lot of it had to do with my training, it was my first fight, I had my opponent switched at the last minute, and I didn’t believe that I could beat him when I walked out to that cage. And in my last two fights, I’ve been one hundred percent confident in myself. It’s still understanding and knowing that something bad could happen – you could get caught, you could lose. But I was more focused on what I could do and confident in what I could do and not so much worried about them and what they can do.”

And with a new lease on his fighting career, a young man who has done everything from selling pickles in New York to wrestling professionally in New England has found a place he won’t be leaving anytime soon.