Chan Sung Jung and The Year of The Zombie

"I think a lot of people underestimate me as a fighter, so that leads to people wanting to challenge me, because maybe they think it will be an easy win. I'm out to prove them wrong." - Chan Sung Jung 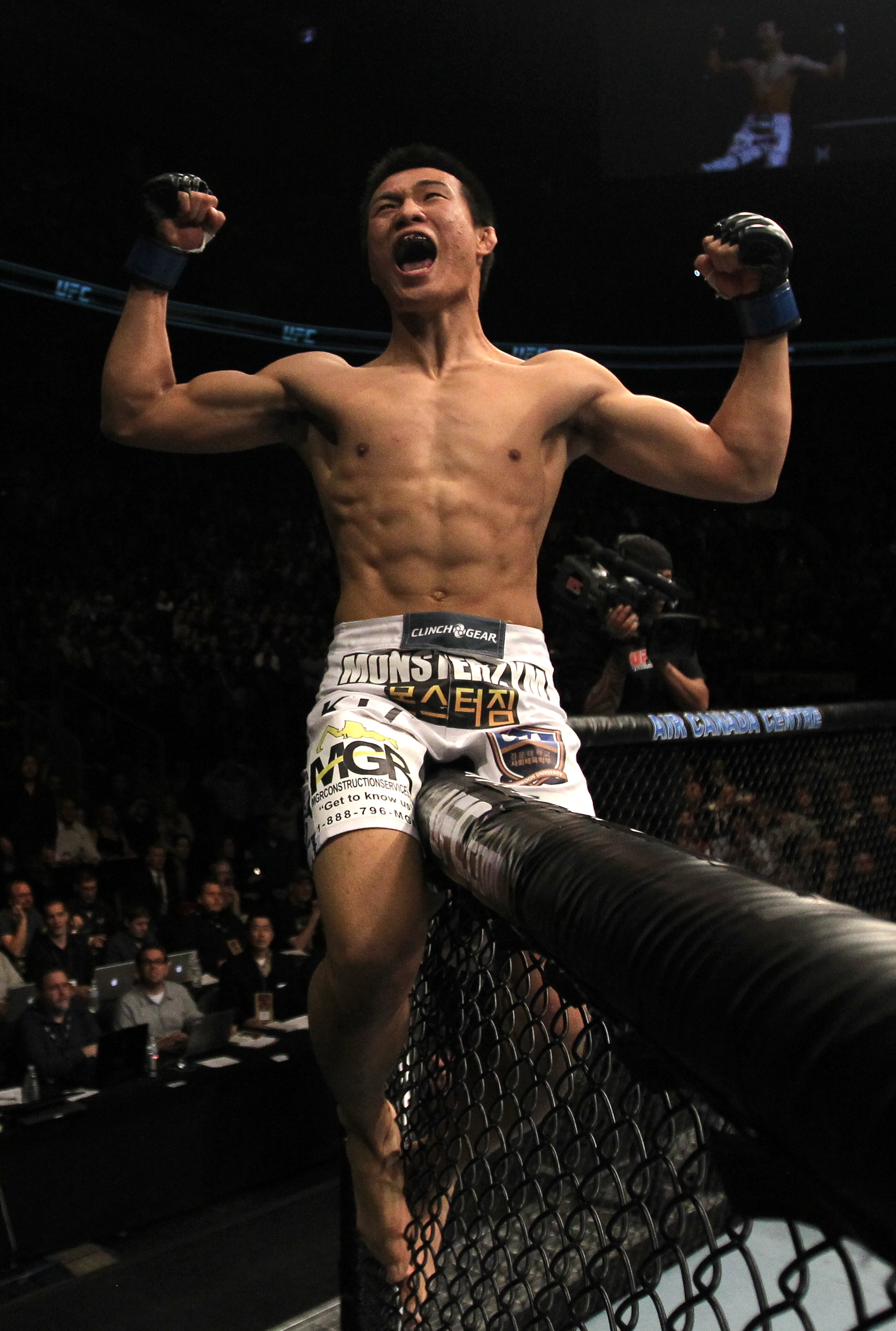 There are a growing number of fighters in the UFC that can be classified as ‘must see’ performers. Then there’s Chan Sung Jung, a fighter with a category all of his own.

That’s not hype for his UFC on FUEL TV main event against Dustin Poirier on Tuesday either, though by the time you hear his qualifications you will most certainly tune in for this highly-anticipated featherweight bout.

Exhibit A) April 24, 2010 – Jung showed why he is nicknamed “The Korean Zombie” in a 2010 bout with Leonard Garcia that was dubbed by commentator Joe Rogan as “The Fight of the Decade.”

Exhibit B) March 26, 2011 – Jung meets up with Garcia again, but instead of tucking his chin in and going to war again, he takes the “Bad Boy” down and submits him with the first Twister ever pulled off in the UFC.

Exhibit C) Seven seconds. It’s all Jung needed to knock out longtime contender Mark Hominick in one of the more surprising results in recent history.

Need I say more? So, Chan Sung Jung, what do you do for an encore tomorrow night?

“I don't really plan to do something or another,” he said through manager / translator Brian Rhee. “If it happens, it happens. But in MMA, you can't plan things out like that, or else you'll get it stuck in your head that you have to do it. I just like to go with the flow and let things unfold naturally.”

That strategy seems to be working. Sure, he lost the decision to Garcia in their first fight, and he got knocked out by a head kick from George Roop five months later, but in the ‘what have you done for me lately’ world of mixed martial arts, all that matters are his last two fights, bouts that have cemented his place as a legit 145-pound contender on the verge of a title shot if he beats Poirier. That’s a big if though, considering the fact that the Louisianan is on an even more impressive run than Jung, having won five straight. “The Diamond” even called Jung out after his February win over Max Holloway, something that didn’t surprise the Seoul, South Korea resident.

“Not really. In the featherweight division, there are a few top guys and they're all shooting for each other. I think a lot of people underestimate me as a fighter, so that leads to people wanting to challenge me, because maybe they think it will be an easy win. I'm out to prove them wrong.”

It’s hard to fathom anyone looking at Jung as an easy out. But what they may be seeing is a fighter who has taken some significant risks in the past in order to deliver the fights fans crave. And while the rewards are great if he’s successful, if not, he can be leaving himself open for the kind of countermoves that can lead to defeat. He says this type of attitude in the Octagon isn’t by design though.

“I don't have that sort of thing in mind. Like I said, it just sort of "happens". More than anything, I think I've been lucky in my fights to have things go the way that they have.

“Everyone has a different style of fighting, so I guess most guys just stick to what works, or what's most comfortable for them,” Jung continues. “For me, I have more of an aggressive style, and generally speaking, it's worked out for me.”

That’s an understatement. Despite not speaking English, Jung has a dedicated following in the United States, most sporting “Korean Zombie” t-shirts. But it’s back home in South Korea where things have really taken off for him.

“Chan Sung's popularity in Korea has increased a lot over the past year,” said Rhee. “The UFC's growing popularity, combined with prominent wins over Leonard Garcia and Mark Hominick have done a lot for his public profile in Korea. For a while, he had a good sized fanbase in the US, but was relatively unknown in Korea. But now, he's been on the cover of Maxim magazine and has been featured in GQ, as well. It's been good for us as well as the UFC, and Korean MMA, in general.”

As Rhee explains, the mixed martial arts explosion isn’t just limited to the United States, Canada, Brazil, and Europe. Korea is rapidly getting up to speed, and with fighters like Jung, Dongi Yang, and Dong Hyun Kim leading the way, the sky’s the limit.

“MMA in Korea is at an all-time high right now,” he said. “There was a time when it became popular with PRIDE and some of the other Japanese promotions. Guys like Fedor and Rampage were pretty well known, but things died down for a while when PRIDE was bought by the UFC and other promotions folded. This new wave of popularity is directly connected to the rise of the UFC around the world. Korean MMA - both the fans and the fighters - have developed a lot since those early years. The younger fighters are getting better and better, and there's more of a foundation now then there was before.”

Jung, as is his personality, won’t take any credit for this. He doesn’t even see himself as one of the country’s top fighting stars.

“I don't really think of myself as being famous,” said the 25-year old. “So, in that regard, I haven't really had much to adjust to. I have a long way to go as a fighter and a person. The UFC is becoming more and more popular in Korea, so I've got more exposure along with that. I think it's mutually beneficial... The more Korean fighters do well in the UFC, the more the Korean fans will get interested in it.”

So if you’re thinking Jung will start rolling into town with a 20-deep entourage and referring to himself in the third person, that’s not happening.

“He's taking it in stride,” said Rhee. “He's always been a good kid. He's well grounded and doesn't get too caught up in it. I can honestly say that it hasn't gone to his head at all.”

What is keeping Jung occupied is this upcoming fight, his first five rounder. For most, that’s stressful enough. For a hard-charging battler like “The Korean Zombie,” it has to be even more of a concern that come round four and five, the tank may be empty if he fights at his usual pace.

“The biggest thing is working on conditioning and stamina,” he said. “You've got to make sure you have enough energy left to keep fighting and be aggressive all the way through the last seconds of the final round. I'm really just waiting to see how things unfold once the fight starts. If there are openings, I'll take advantage of them as they come. I'm not going to push the pace too early, but likewise, if an opportunity presents itself, I won't hold back because I'm worried about the later rounds.”

Sounds like another Chan Sung Jung fight. Only this time, the stakes are a lot higher. Just don’t tell him that, because as far as he’s concerned, Dustin Poirier is his first, last, and only fight.

“There's no point in thinking about the next match before I win this one,” he said. “I have to take things one step at a time.”