Champs and Challengers Meet the Press

“I set my goals to be the greatest light heavyweight record-wise. This record means everything to me." - Jon Jones 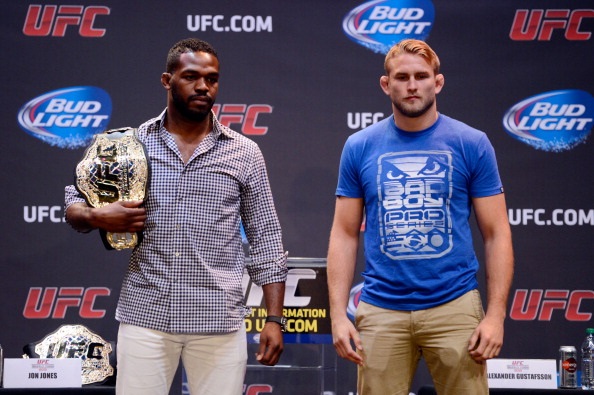 One really has to give a tip of the cap to the marketing wizards for UFC 165’s catchphrase. It works on a litany of levels. Is it referring to the UFC light heavyweight title defense record or, simply, the championship gold itself? Is it furthering an unbeaten streak and a claim as the top in the division or is it a reuniting a former champ with a belt he was the first owner of? From whose perspective is the “greatness” almost within their grasp?

The answer, all of them.

On September 21st at the Air Canada Centre in Toronto, Canada, two titles separated by seventy pounds will be on the line as UFC light heavyweight champion Jon Jones takes on Sweden’s spark plug Alexander Gustafsson and, in the co-main event, interim UFC bantamweight champion Renan Barao will square off with the furious fists of Eddie Wineland. For the current champs, it’s a chance to extend their already incredible victory-laden venture inside the Octagon. For their respective challengers, it’s the opportunity of a lifetime to claim the coveted crown of their weight class.

Before chins can be tested or takedowns thwarted, the quartet of combatants, plus UFC President Dana White, took to their phones to hold a call with the ever-inquisitive MMA media. The lion’s share of questions were directed to the UFC’s leader in the pound-for-pound rankings, Jones, with several hinting at those pesky comparisons of “Bones” to his opponent, “The Mauler”, which the champ responded with, “We're both 26 years old and we're both over 6'4"; outside of that, we're completely different fighters. We've got the same height and age and that's absolutely it.”

It’s been five years since Jones debuted with a unanimous decision win over Andre Gusmao, and with every subsequent Octagon appearance, he has evolved into arguably the most dangerous fighter on the UFC’s roster. With 12 Octagon wins, nine finishes, five bonuses, five title defenses, and one squirrely DQ loss, Jones is more driven than ever before, as he is poised to break Tito Ortiz’s long-standing record of most title defenses at 205 pounds. While many already believe it, a win over Gustafsson should solidify “Bones” as the greatest champ in the history of the UFC light heavyweight division and, obviously, that is motivation enough for Jones.

“I set my goals to be the greatest light heavyweight record-wise,” tells Jones. “This record means everything to me. I know I'm not unbeatable. There is no one that is unbeatable. I just turned 26 years old, no injuries, and I'm just at the beginning of my career. The champions who have lost have nothing to do with me.”

Other queries for 205’s kingpin ranged from the friendly-rivalry with his two brothers, Arthur and Chandler, who both play in the NFL, to whether “Bones” pays any attention to negative @mentions he receives on Twitter. A lot of consideration was spent on the topic of Jones’ studying of film on his opponents and his opinions of them, especially Gustafsson.

“I think what makes me different is that I know what I'm getting into and I know where I need to be the sharpest,” explains Jones. “I tend to feel like I'm one step ahead of the game. I know that comes from studying. If you do your homework then you should be relaxed and calm for that final exam. I just believe that I use my reach better. If you watch my fights and Alexander’s fights, and he gets hit a lot. I think I use my timing and my distance better and I think the proof is in the pudding.”

On top of all that, Jones took time to thank his growing fanbase and his revered coaching staff. “I am coached by five of the smartest coaches in the world and that's how I've made it this far,” says Jones of his coaching crew at Team Jackson-Winkeljohn in Albuquerque. Least we forget, “Bones” quoted Sun Tzu’s “if you know the enemy and know yourself, you need not fear the result of a hundred battles.” It feels like light years ago people criticized Jones’ repartee with the media and, now, the champ’s quoting Sun Tzu off the cuff.

While not much was literally asked of him, “The Mauler” Gustafsson has a mountain of a task ahead of him in challenging Jones for the belt. The tip of Swedish MMA’s spear has been splitting his title shot training time between Allstars Training Center in Stockholm and Alliance MMA in Chula Vista, California. The 15-1 stand-up specialist is enjoying a six fight win streak, including a unanimous decision over former champ Mauricio “Shogun” Rua. The big question surrounding Gustafsson vs. Jones, can “The Mauler” use his reach effectively against Jones’?

Gustafsson’s answer was succinct and strong, “I will win this fight by standing on the outside, no doubt about it.”

In the co-main event, the first-crowned WEC bantamweight champion Wineland is set to tangle with the current owner of that belt’s UFC incarnation, Barao. A little over seven years ago, Wineland scored a head kick followed by a bevy of punches to become the inaugural 135-pound champ in the never forgotten WEC. After back-to-back impressive wins in 2012 over Scott Jorgensen and Brad Pickett, the 20-8-1 Wineland has found himself challenging for the title against an interim champ who hasn’t tasted defeat in over eight years.

“The opportunity is huge,” asserts Wineland. “This is a homecoming. I'm going to put it all on the line and I plan to take that belt back to Indiana with me. It's been the culmination of what I've been working for for the last 10 years. I've just reset myself mentally. Physically I've always been there. I just said I'm not going to get beat no matter what. His win streak is amazing. He hasn't fought me yet. He's just another man who puts his pants on one leg at a time. There's no reason why I can't beat him.”

There’s no specific reason why Wineland can’t win, but there are 33 consecutive examples of people being unable to do so against Barao. The Brazilian phenom from the famed Nova Uniao camp in Rio de Janeiro was asked the same amount of questions as were asked about UFC’s UK ring girl Carly Baker: one. Maybe there is nothing to wonder about the machine-like winning precision of Barao since his second pro fight in 2005. The interim champ won the belt in a unanimous decision against Urijah Faber at UFC 149, then successfully defended it earlier this year with the arm triangle choke of Michael McDonald in February.

The lone question surrounded the validity of Barao’s claim as being the best in the division with UFC bantamweight champion Dominick Cruz being injured for the past two years. In light of his mentioned accomplishments, Barao’s words, while few, hold a lot of weight: “From the moment I had won this belt and defended it once, I have considered myself the champion.”

On September 21st at UFC 165 in Toronto, Canada, two champions and two challengers will enter the Octagon, stand toe-to-toe, reach forward, and attempt to take the glory that’s in front of them.