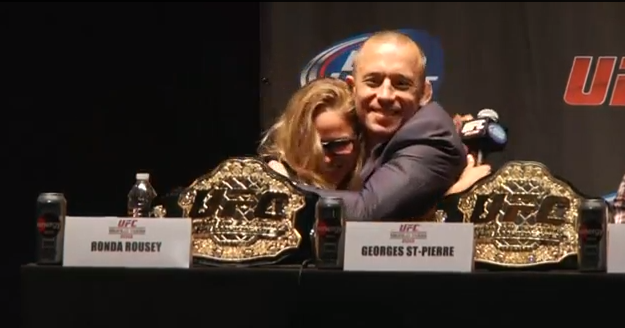 Just because we can’t fight there, doesn’t mean we can’t promote there.

The latest stop of the UFC World Tour touched down in New York City Wednesday, with champions and challengers sharing the stage yet again to talk of their current opponent, hypothesize about future ones, and to hear more priceless vitriol between upcoming Ultimate Fighter season 18 coaches Miesha Tate and UFC women’s bantamweight champion Ronda Rousey.

In the sequel to Tuesday’s press conference, the elite eight plus UFC President Dana White packed Manhattan’s illustrious Beacon Theater on the Upper West Side to continue the conversation with the MMA media and fans alike which began 3000 miles away in Los Angeles about these four pay-per-view title fights.

Much of the discussion was dominated by questions trying to get to the bottom of this fiery feud between the famed fighting femme fatales. As the aforementioned TUF 18 coaches prepare for their end of the year championship rematch at UFC 168, the undefeated face of the women’s MMA movement, Rousey, explained that she would much rather see the attack coming than to later get the proverbial knife in the back.

“I think it is a personality thing mostly,” tells Rousey. “I think it was how we were raised. I was raised that in order to respect somebody you are honest and upfront with them and you tell them how you think. [Tate] idea of ‘respect’ seems to be to smile to your face and then do something behind your back. I think it would be more respectful if she told me off to my face than to smile to my face and talk behind my back. Everything she's ever really said that was insulting about me was never said to me. I think that is classless.”

On the other end of the dais, the challenger and former Strikeforce women’s bantamweight champion Tate believes it was “Rowdy” who was the primary mover and everything else has been a snowball effect. “The problem I have with Ronda is that I felt she was disrespectful from the get-go,” remembers Tate, who recalled an early interview of Rousey’s where she stated she would slap the title out of Tate’s hands. “I was like wait a minute, 'Who is this girl? I would never be so disrespectful.' I was like ‘I don't like that’ and she was like ‘I don't care if you don't like that.’ It has kind of escalated from there.”

And yet, both “Cupcake” and “Rowdy” did take time to compliment the other at the behest of the persistent MMA media. “Before that fight, I didn't respect her and now I do,” said Tate about their March 2012 bout in which Rousey armbarred Tate for the Strikeforce title. Meanwhile, Rousey went on to point out how much she enjoyed Tate’s past two performances in her sub stoppage of Julie Kedzie and her TKO loss to Cat Zingano. As several journalists conspired to get a UFC champion and a former Strikeforce champ to settle on being ‘frenemies’, Rousey closed the gossip column line of questioning with, “I think only as an athlete and a fighter do I relate to her; personally I don't think so."

Maybe not as salacious or attention grabbing as the soundbites about outside of the cage feelings, Rousey’s breakdown of her almost robotic attitude when inside the Octagon was a true glimpse into the mind of a UFC champion, specifically one who is 7-0, with all wins via first round armbar.

“I fight emotionless when I'm out there,” reveals Rousey. “I'm really opinion-less when I'm out there. I see all the options and I try to narrow them down until a finish. I don't have any time to feel one way or another about my opponent. Compartmentalizing is what separates champions apart. I have had terrible, crazy days leading up to a fight and you have to just turn that off and do it. I'm not undefeated because I've had the perfect circumstances leading up to every fight. I'm undefeated because regardless of the circumstances I still win.”

Next to Rousey and Tate at their respective tables, this November’s UFC welterweight championship bout at UFC 167 in Las Vegas: Johny “Bigg Rigg” Hendricks vs. Georges St-Pierre. With a divisional record of eight successful title defenses, St-Pierre added some unexpected levity to the event by admitting to being a ‘nerd’, politely excusing himself for a bathroom break, and hugging Rousey after revealing he’s now an educated fan of women’s MMA because of the “Rowdy” one. Also, the 32-year-old boss of the 170-pound weight class spoke on how he stays so determined to keep his spot on top of the mountain.

“Nobody is invincible,” states St-Pierre. “Nobody is protected from that. It gives me the motivation to make me remember that I'm only one mistake from losing everything; it makes me sharp. Johny really earned the title shot, he's on a roll right now, he's the #1 guy. That's what makes the fight so exciting and what makes me so excited. I want to be the best and to be the best I have to beat the best. I'll be ready for the fight. I'm excited. I'm a very confident guy. I have never fought a guy like him, but he's never fought a guy like me neither. I will solve the problem November 16th.”

About 24 hours earlier, Hendricks emphasized how he would gladly eat the champ’s jab to land his own crushing left hook, which has earned “Bigg Rigg” three Knockout of the Night awards in the UFC. Not many questions were offered to the accomplished amateur wrestler with a 15-1 MMA record, but Hendricks did get to share his thoughts on his title fight and they were perfectly surmised in two sentences: “He's been a great champion. Now, it's just time for somebody else and I believe that's me.”

Seated next to the welterweights were two mammoth juggernauts with a familiar history in derailing the other for UFC heavyweight gold in current champ Cain Velasquez vs. former champ Junior Dos Santos. At UFC 166 in Houston, Texas, the trilogy that began at the first UFC on FOX event in November 2011 will come to a close. In their initial meeting, “Cigano” took the belt from Velasquez with a single overhand strike. In the rematch 13 months later, Velasquez reclaimed the strap with a couple hundred strikes during a one-sided unanimous decision.

The other heavyweight talk, beyond having the UFC’s two best (who appear to be the only ones able to beat the other) fight for a conclusive third time, was of two hypothetical scenarios. The first was Velasquez running through 6’9” Tyson Fury, if the British boxer ever decided to step inside the Octagon. The second idea focused on UFC light heavyweight champion Jon “Bones” Jones moving up a division to test the waters. Certainly a compelling concept, but Jones has his eyes set on one goal and that’s defending his title against the 15-1 Alexander Gustafsson at UFC 165 as he moves toward an unequaled legacy in the division.

“I have a lot to prove still,” affirms Jones. “I'm not looking past this opponent here, but Glover Texiera is somebody that I'm looking forward to fighting. I'll be here for a little while for sure. I have teammates who are heavyweights and there is still a lot of work to be done at light heavyweight. I want to set a standard and record that is really hard to break and that will take some time.”

Immediately following the press conference, the light heavyweight headliners for the September 21st event jettisoned from Jones’ home state of New York off to Gustafsson’s home country of Sweden for their leg of this UFC World Tour. “The Mauler” will no doubt receive a hero’s welcome Thursday with only the sky as the limit if he pulls off the upset and returns the next time with UFC gold.

From September to December, UFC pay-per-views will be highlighted by these champions and challengers who will stop talking about their opponents and finally settle with them who is better inside the Octagon.