A look back at some interesting championship facts as the UFC 145 bout between Jon Jones and Rashad Evans approaches... 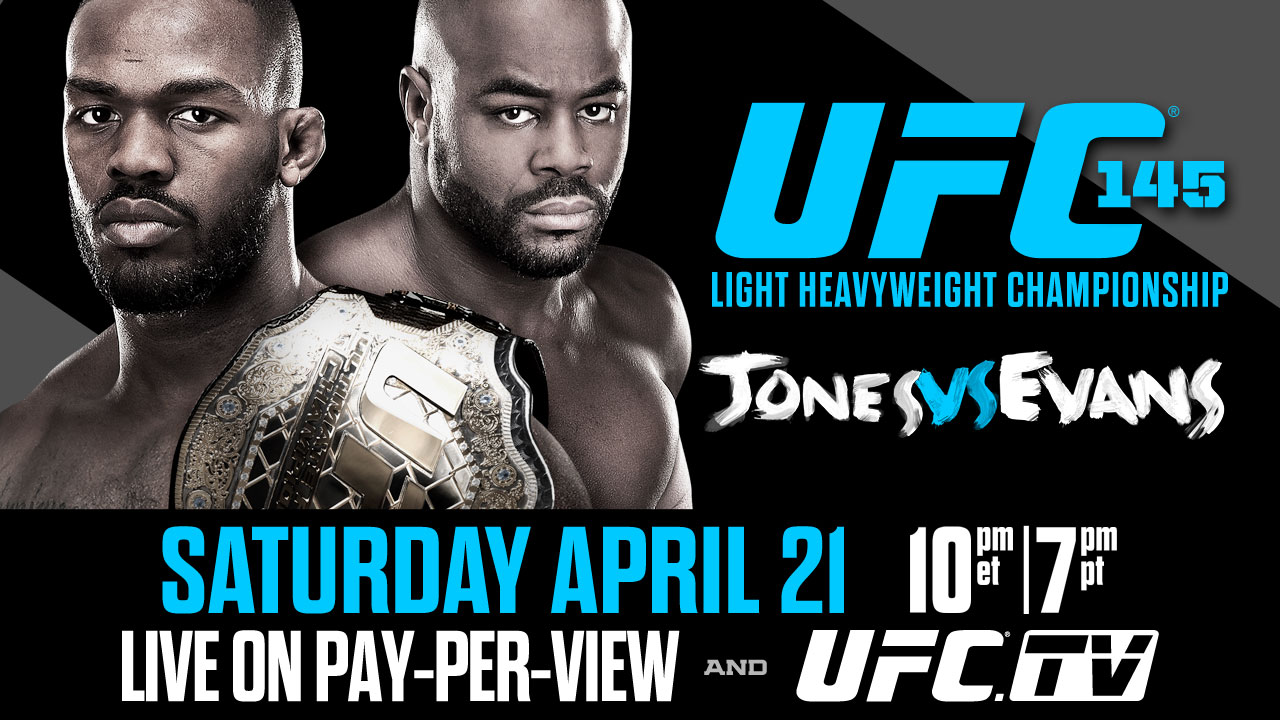 On April 21st in Atlanta, Georgia’s Philips Arena, one of the most highly-anticipated championship bouts in recent years headlines UFC 145, as light heavyweight king Jon “Bones” Jones attempts to successfully defend his crown for the third time against former 205-pound titlist “Suga” Rashad Evans. It’s the latest chapter in the organization’s championship history, and one that fans hope will add to a pretty interesting tale thus far.

How interesting? Let’s take a look at some fun facts.

THE FINISHERS
Sure, Jon Jones is the youngest champion in UFC history, and that’s an impressive feat. But what may be more impressive is that he has finished all three of his title fight victories thus far, stopping Mauricio “Shogun” Rua and submitting Quinton Jackson and Lyoto Machida. That’s not easy, especially at the championship level. Jones is one of 18 fighters to win three or more UFC title fights, yet only Jones and five of his peers have finished all of their championship wins. Those five are Andrei Arlovski (3 finishes), Brock Lesnar (3), Chuck Liddell (5), BJ Penn (5), and Frank Shamrock (5).

TAKING THE BELT BACK
When Rashad Evans steps into the Octagon at Philips Arena next month, he will be the fifth man to attempt to regain the UFC light heavyweight title. History isn’t on his side though, as the previous five attempts (two by Randy Couture, one each by Tito Ortiz, Lyoto Machida, and Quinton Jackson) have yielded just one victory, Couture’s 2004 rubber match win over Vitor Belfort. What makes it even worse is that two of those defeats (Machida and Jackson) were handed out by Evans’ April 21st opponent, Jon Jones.

HOT POTATO
Obviously the late addition of the featherweight and bantamweight divisions in the UFC in 2010 preclude them from having the long history of the other weight classes in the promotion, but just for argument’s sake, what divisional titles have been the toughest to hold on to over the years? Not surprisingly, the big men are in the lead, with 15 titleholders in the heavyweight class (which admittedly was the first division to have a title belt), and 11 at 205 pounds. The welterweights have had seven men hold the 170 pound crown (either full or interim), with the middleweights and lightweights seeing five champions each. As for the lighter weight classes, Jose Aldo (featherweight) and Dominick Cruz (bantamweight) have been the only men to wear gold at 145 and 135 pounds, respectively.

TOUGHER THAN MOST
A five round fight is usually all it takes to separate the men from the boys in MMA; that’s why rounds four and five are called the championship rounds. So who have gone more rounds in championship fights than anyone else? Randy Couture (44), BJ Penn (42), and Georges St-Pierre (37). As for total title bouts, again it’s “The Natural” up top with 15 fights, followed by Matt Hughes (12), BJ Penn and Georges St-Pierre (each with 11), Anderson Silva (10), and Tito Ortiz and Tim Sylvia (each with 9).

UNBEATEN
The UFC is currently home to eight champions (seven full champions and one interim titleholders), with a ninth to be crowned after the flyweight tournament concludes. Of those eight titleholders, seven (Junior dos Santos, Jon Jones, Anderson Silva, Carlos Condit, Benson Henderson, Jose Aldo, and Dominick Cruz) have never lost a UFC title fight. That’s an amazing stat for those sporting a combined 22-0 title bout record. Who else in UFC history has escaped the agony of defeat in UFC title fights? Josh Barnett (1-0), Murilo Bustamante (2-0), Jens Pulver (3-0), and Frank Shamrock (5-0).

NEWBIES
When Brock Lesnar fought for the UFC heavyweight title in just his fourth pro fight, it was a shocking development for some, but not for the man he defeated for the belt – Randy Couture – who pulled off the same feat years earlier against Maurice Smith. And Lesnar and Couture are not alone, as Mark Coleman (6th fight), Frank Mir (9th fight), and Cain Velasquez (9th fight) also won their titles with less than 10 pro fights’ experience. What do they all have in common? They’re heavyweights. The other 15 fighters to battle for a UFC title with less than 10 fights to their name (with the exception of Kevin Randleman, and some would say he won his heavyweight title bout with Bas Rutten) all failed in their quest, and all are from weight classes ranging from 205 to 155. It’s a star-studded list too, one that includes BJ Penn, Tito Ortiz, Georges St-Pierre, Kenny Florian, Matt Lindland, and Nate Quarry.

TOURNEY TIME
The recent flyweight tournament that began in Australia a couple weeks back brought back memories for hardcore fight fans, even if the entire tourney didn’t take place on a single night like they did when the UFC first got off the ground in the early-90s. Before the 125-pounders battled it out, the Octagon hosted 23 tournaments, from no weight class competitions to those waged everywhere from heavyweight down to the under 170 pound class. Of course, the undisputed king of the tournament format was Hall of Famer Royce Gracie, who won three, but Dan Severn, Mark Coleman, Don Frye, and Mark Kerr acquitted themselves well, each winning two. Among modern-day UFC fighters, the only ones on the current roster to have won a UFC tournament are Vitor Belfort (UFC 12) and Dan Henderson (UFC 17).

SUPERFIGHTS
Back in the early days of the UFC, the precursor to the crowning of proper champions was the Superfight Championship. This title was reserved for the best of the best, with the biggest stars of the budding promotion saved for single fights outside of the tournament format which ruled the early events. The first Superfight Championship bout was waged at UFC 5 in April of 1995, but in a perfect case of Murphy’s Law, there was no champion crowned, as Royce Gracie and Ken Shamrock fought to a draw. Gracie would not fight in the UFC again until 2006, but Shamrock took the title for himself in his next bout at UFC 6, submitting Dan Severn. Shamrock successfully defended his belt twice against Oleg Taktarov and Kimo Leopoldo before getting decisioned by Severn in their UFC 9 rematch. The title eventually morphed into the UFC heavyweight title, with Mark Coleman becoming the promotion’s first heavyweight champ by beating Severn at UFC 12.

KNOCKOUT KINGS
When you’ve reached the championship level and the best are facing the best, early finishes are likely to become rarer and rarer. Well, that’s unless your name is Anderson Silva, who holds the record for most knockouts in championship fights with six. Following “The Spider” on the list are Chuck Liddell, Randy Couture, and Matt Hughes, each of whom have five title bout KOs.

SUBMISSION SPECIALISTS
One of the few championship records not held by Anderson Silva is for most submission wins, a mark held by former 205-pound boss Frank Shamrock with four. Yet while Silva, who sits in third place all-time with two, has time to equal or surpass that mark, he could have been in second place along with Matt Hughes and BJ Penn with three if his UFC 67 opponent Travis Lutter made weight for their title bout, which Silva ended via submission in the second round.