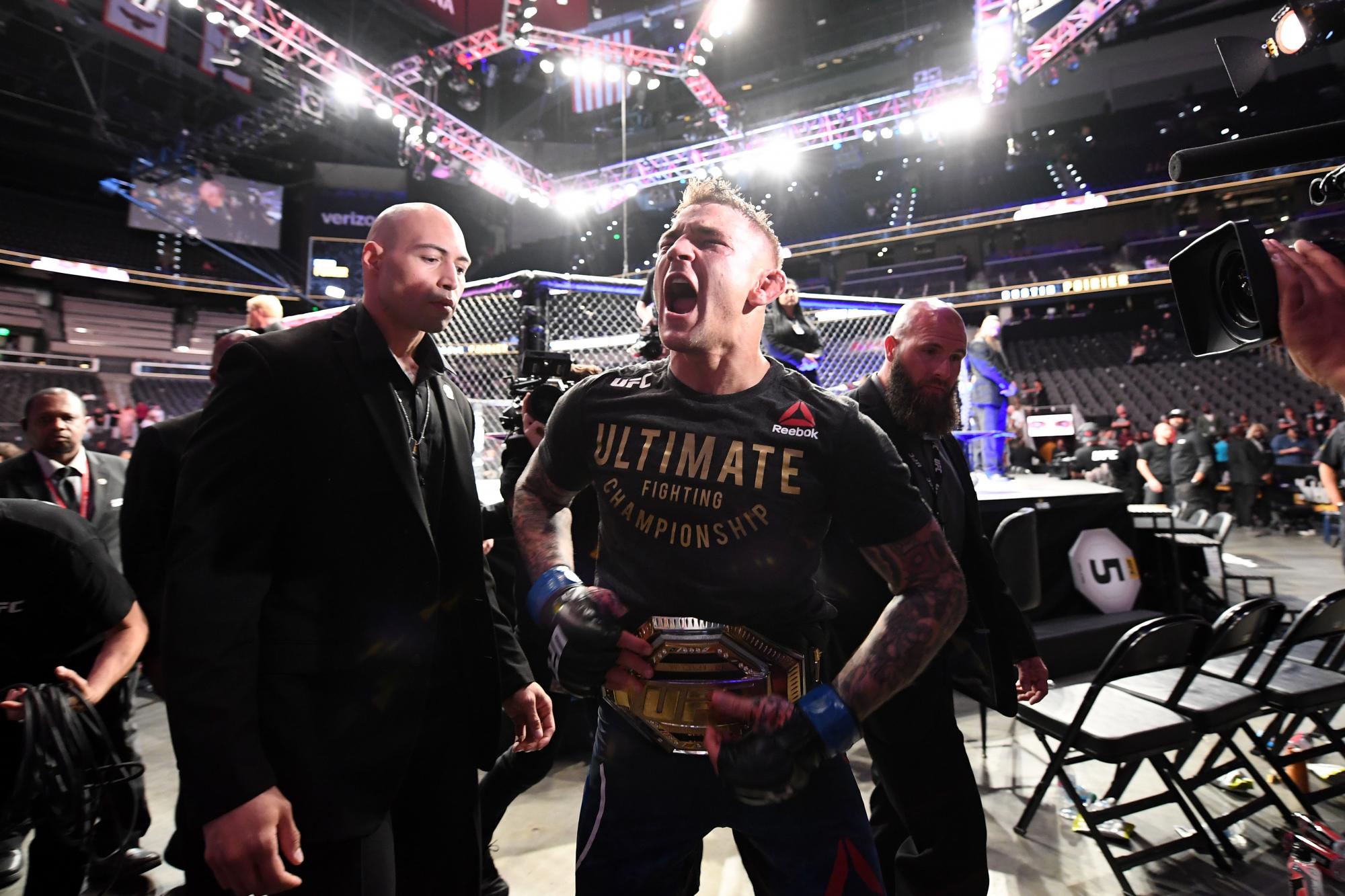 Championship Life Is Better Than Anticipated For Dustin Poirier

Dustin Poirier has enjoyed finally earning the championship belt, and his foundation has benefitted from his success as well.
By Zac Pacleb • May. 21, 2019

Every morning for the last couple of months, Dustin Poirier wakes up to a new and beautiful sight:

UFC gold laying on his counter.

“It feels better than I thought it was going to feel,” Poirier said when UFC.com caught up with him during UFC Fort Lauderdale in April. “Every morning, I wake up, I’m excited to wake up just because I wake up with a different step.”

Megan Olivi catches up with Dustin Poirier after his championship win against Max Holloway.

When Bruce Buffer read the scorecards in Poirier’s favor and Dana White put the strap around his waist, it was the culmination of a long, roundabout journey to the title. One that took several years and an almost-record-breaking amount of fights to reach. Along the way, he earned plenty of respect across the roster and especially from his teammates at American Top Team.

"I'm so pumped, I'm so happy for Dustin Poirier," former UFC strawweight champion Joanna Jedrzejczyk said. "There are so many great, talented and hardworking athletes at ATT headquarters down here in Florida, but definitely Dustin is - not one of the most - he is the most hardest working fighter in the gym, so he deserves it all the way, and I cannot wait to see him fighting against Khabib Nurmagomedov."

The “interim” in front of his title as lightweight champion hasn’t dimmed the shine off the belt for Poirier, nor has the looming unification bout with Khabib Nurmagomedov. In the meantime, Poirier is enjoying being back home for the first time in a few months and relaxing, if only for a short while.

“It was good to be back in Louisiana visiting family and eating some Cajun food,” Poirier said. “But I’m already back in the gym working on jiu jitsu and boxing there in Louisiana.”

While the “The Diamond” is staying sharp, he hasn’t focused his training on the undefeated Russian just yet. He said he won’t start tailoring his training for Nurmagomedov until a fight is officially set, so his focus now is just on overall improvement.

He’s also focused on growing The Good Fight Foundation, which he and his wife, Jolie, founded.

The non-profit organization auctions off fight-worn UFC memorabilia for charity and to benefit Poirier’s local community, and as his profile grows from his most recent win, the foundation goes along with it.

“The feedback has been great,” he said. “We’ve reached our goal. We’re going to build this playground. We’ll have it built before next school year, so this summer, it’s going to be done, and we’re just excited to keep the ball rolling and try to do bigger and bigger things and touch as many people as we can with The Good Fight (Foundation).”

After going through a five-round, Fight-of-the-Night-earning war with Max Holloway, the two exchanged plenty of kind words. Backstage, Holloway signed his gloves and gave them to Poirier to auction off for his foundation, a gesture Poirier called “amazing.” Other athletes who have donated their gear include Eryk Anders, Al Jouban and Cub Swanson.

Life is good for Poirier. He reached his long-held goal of bringing the UFC championship belt home to his wife and daughter. The feeling of accomplishment exceeded expectations. He is positively impacting his community, and in doing so, continuously seeing the amount of respect he has across the UFC roster.

On top of all that, he most recently received the key to his hometown of Lafayette, Louisiana, in mid-May.

“Such an honor to receive the key to Lafayette Louisiana yesterday!” Poirier wrote on his Instagram account. “I love my city. I'm blown away by the love and support from Acadiana. Thank you all! Im very grateful and will continue to represent us the best I can.”

None of it, though, likely tops that feeling he gets when he sees that belt in his house.

“I have the gold belt laying on my counter every morning when I wake up,” Poirier said. “It feels surreal. It’s incredible.”