It didn’t look like it as he lifted the UFC middleweight crown from the head of future Hall of Famer Anderson Silva in 2013, but Chris Weidman admits that he wasn’t as cool as everyone thought he was on that July night in Las Vegas.

These days, Weidman possesses a different kind of swagger. His relaxation in the glare of the spotlight is real, a testament to two wins over Silva and subsequent victories over Lyoto Machida and Vitor Belfort. It’s as if the “All-American” has settled into his role as champion of the middleweight division and ambassador for the sport, and he’s fine with that.

“After that fight with Silva, I gained experience,” he said. “I got used to being here with the media and all that stuff, and it's what I expect.”

“The more fights he goes into, and the less pressure, he's settling down to what Chris Weidman is,” added Weidman’s coach, Ray Longo. “And that's a very relaxed, confident guy.” 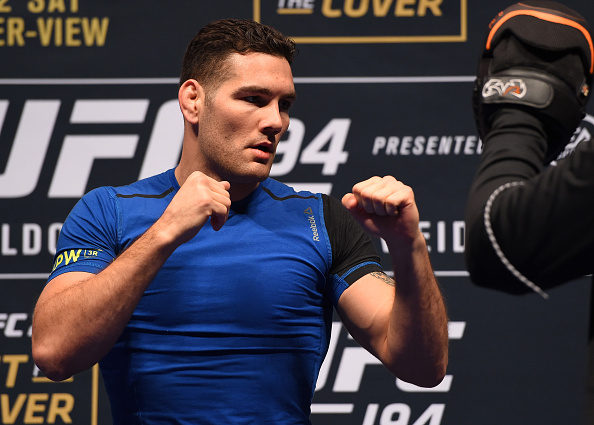 If Team Weidman believes a fight against No. 1 contender Luke Rockhold in the co-main event of UFC 194 this Saturday is less pressure, then maybe that’s the key, because if they’re that comfortable facing a talent like Rockhold, then that’s a beautiful place to be.

That doesn’t mean they’re taking Rockhold lightly. But considering the aforementioned Murderers Row Weidman has already beaten, which includes two of the trickiest puzzles to figure out in Silva and Machida, anything has to be easier than that.

“Anderson Silva was Neo, the guy from The Matrix,” Weidman’s longtime friend and training partner Gian Villante said. “He was just an animal. So it's hard to say he hasn't seen tougher. But you never know who's going to show up. I definitely think it's a tough test, but he did beat the greatest of all time, so that's pretty good.”

Longo agrees, and he doesn’t consider Rockhold the most difficult puzzle the New Yorker has faced; just the latest. And if anything, he believes Rockhold and the AKA braintrust in San Jose may be underestimating the 31-year-old champion.

“It's just another fight, another puzzle to figure out, and that's really the way we approach it,” he said. “I don't think he's the trickiest guy, but I think he's very well-rounded. And some of these other guys brought some dynamics that you had to really be worried about. Maybe Luke's more of a power player, but I think Chris is more of a power player. If that's the way they want to go, it will definitely be a short night for Luke Rockhold.

“I think they're really underestimating Chris' speed, his power, his timing, his strength, his length. There's a lot going on.”

But the key may very well be something that has nothing to do with left hooks, takedowns or armbars. For a superstar of the sport, Weidman is refreshingly down to earth, and that doesn’t have to do with his teammates and coaches – all of whom will, in typical New York fashion, keep everyone in line – but more with the Long Islander’s entire support system.

“I hope it's not only the people around him at the gym, but he's got a beautiful wife, he's got three kids to keep him grounded, so I think he's got a great family, a great mother and father, great sister, great brother, and I think it all helps and it's all part of the puzzle,” Longo said. “It's not just the gym. It's an effort from everyone.

“Everybody's really close, and whenever you're in a close community, anything you do is going to be under the lights. So I think that's really the key. If it keeps like that, there's no problem. He's surrounded by some really good people, he's got a great family, and to me that's the difference. It's like he's fighting for a cause.”

And if all else fails, there’s always Villante, Weidman’s partner-in-crime and a constant reminder that no matter how many autographs the champion signs, he’s still just Chris at home.

“I don't know if it's that important to have me around, but I do definitely think I help,” Villante said with a laugh. “Between me and his wife, we probably get the worst Chris Weidman, but we also bring out the best in him. He's a great dude, and no matter what, he's gonna keep his head on his shoulders. I need him around, and I hope he needs me around. We've stayed together for a while, and it's going to be for as long as we're in this sport and after this sport.”

As for Saturday night, Weidman has the last word, and it’s nothing about the past or the future.