In the year like no other, “crazy” seems to be the operative word to describe 2020. How would UFC heavyweight champion Stipe Miocic describe the last 12 months?

“Crazy,” he laughs. “It's pretty much what it is because you never knew what was gonna happen. It's like life, anything can happen in life. You've got your good years, sometimes you have bad years and I think this year, combined for everyone, it's not been a great year with the pandemic and not seeing loved ones or seeing friends and going out to dinner. It's been tough, but I think we're staying strong. We've got the vaccine now, so hopefully things will start looking better for the summer.”

It’s an optimistic view from a man who saw things unfold on the front lines as a firefighter in his home state of Ohio. Yes, in addition to successfully defending his title in the rubber match of his trilogy with Daniel Cormier, Miocic was still putting on the gear and protecting his neighbors from matters out of their control.

“It was weird because we have a lot of protocols since COVID hit and so many things we have to do,” Miocic said of life outside the Octagon. “We have to make sure we're good when we walk into the fire station, if we feel somewhat sick, we don't go in, and when we're on calls we have to wear masks and goggles and gowns. But the calls actually went down a little bit just because I think everyone's more nervous about getting it. People didn't call unless they really had to go to the hospital. So it was a little weird in the beginning just because no one knew what was happening. It was new. But then we were starting to figure out more about it and people were being more safe about it. The calls are picking up, but people are still being cautious.”

Add in his roles as husband and father, and it’s safe to say Miocic wasn’t binge watching too much in 2020. But that’s how it’s always been for a man who has embraced being an ambassador for his family, the city of Cleveland, and his sport. In other words, Miocic has shown the world, especially younger fighters and kids who look up to him, how this should be done.

“Not just the fighters, but for kids in general,” he said. “MMA's becoming such a big sport, it's the fastest growing sport in the world, and people love it and get so involved with it that being a good role model for kids coming up shows them the right way. Just be you and not a diva and you'll be fine. (Laughs) I'm not perfect, we're all human, but I do the best that I can. Plus, I have an amazing wife that helps me, too. But you've got to be on point with stuff.”

With so much on his plate and the idea that after settling the score with DC he could walk off into the sunset as the greatest heavyweight in UFC history, there was talk that the Cormier fight might be his last. Miocic heard that talk, but he’s not done yet.

“During the week we did the press conference, and they were talking about me retiring and I said I think about retiring after every fight, it's not just this one,” he said. “And honestly, I know it sounds cliche to say this, but this was one of the best camps, not training wise, but my body feeling great. I was understanding my body, I wasn't terribly beat up as I usually am, and it was weird, but I just felt really good. The minute I'm not having fun in this sport, I'm out, and as of right now, I'm having fun, so let's keep it going. But I'm not gonna be sticking around just to get a paycheck.”

So after a career in which he’s defeated the likes of Cormier, Francis Ngannou, Roy Nelson, Mark Hunt, Andrei Arlovski, Fabricio Werdum, Alistair Overeem and Junior Dos Santos, setting the record for most consecutive successful UFC heavyweight title defenses in the process, there are still challenges for the Cleveland product?

“There's always a challenge,” he said. “Even if you beat the guy before, there's always a chance. The guy can come back and he's hungrier and he's better than the first time. You've always got a target on your back when you're the champ.” 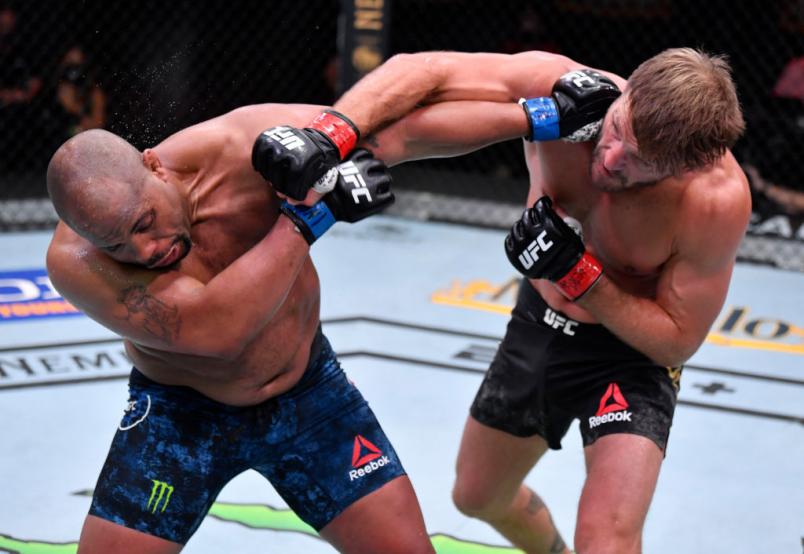 That fluorescent target on his back is now being honed in on by none other than Ngannou, who Miocic defeated nearly three years ago. Back then, it was a master class from the champion as he nullified the offense of “The Predator” and dominated en route to a shutout five-round decision win. Since that night in Boston, Ngannou has gone 4-1, with his four straight victories over Curtis Blaydes, Cain Velasquez, Dos Santos and Jairzinho Rozenstruik lasting a combined two minutes and 42 seconds. He looks scary, but then again, he looked scary the first time against Miocic and the champion took care of business. But don’t expect the 38-year-old to sleep on his next challenger.

“It is a fight, and he hits hard and anything can happen,” said Miocic. “It's the heavyweight division and we wear small gloves, and it just takes one, especially with him. He hits hard. But also, look at it on my side, I hit hard too, and I can take him out. I know he's never been knocked out, but I'm definitely gonna try for it, there's no question. I'm not gonna sit there and just try to do a points game; I'm definitely gonna try to go for the finish.”

If he gets it, successfully defending the crown for the fifth time over two reigns, there will be talk of retirement once more, but he doesn’t mind. Stipe Miocic will let us know when he’s done. And that time’s not here yet.

“Before I was champ and during and even when I lost the belt, there's times it gets tough,” he said. “But every time I go to the gym, it's almost like a getaway for me. I get to hang out with everyone, and even though we're training and beating each other up, it's like a hangout. I blow off steam, and every time I train, no matter how bad my day is, I come out of there feeling fresher and feeling better.”