Kamaru Usman Established His Dominance One Fight At A Time.
By E. Spencer Kyte, on Twitter @SpencerKyte • Jan. 1, 2021

Kamaru Usman started training in South Florida when the group that would eventually come to be known as “The Blackzilians” operated under the Imperial Athletics name and consisted of only a handful of fighters.

He was the guy former light heavyweight champion Rashad Evans, then the most high-profile of the team’s founding members, urged everyone to pay attention to early because there would come a day when his “little brother” was going to be a problem for everyone in the welterweight division.

Usman continued to work with that group as the team switched names, switched locations, and switched up its roster. When he won the welterweight title from Tyron Woodley at UFC 235 in Las Vegas and defended it against Colby Covington nine months later at UFC 245, he was cornered by Henri Hooft and Greg Jones, amongst others, and competing under the Hard Knocks 365 banner.

Today, that crew operates out of Sanford MMA, with a roster flush with elite talents, but the welterweight champion is no longer one of them.

“Let’s say it for what it is: I had to break away from there,” began Usman, who officially severed ties and shifted his training elsewhere when a matchup against his longtime teammate and training partner Gilbert Burns appeared to be inevitable, and now trains under Trevor Wittman and alongside lightweight standout Justin Gaethje in Colorado. “Once that was looking to be the case, it was time to make that move because it was something I had been thinking about for a while.

“Making that move is extremely stressful because — I want to say I was spoiled in a sense, because that’s all I’ve known. I live there, my daughter is there, I wake up, I go to practice, get done, come back home, and to have all of that change was very, very stressful for me.

“Part of why it was so difficult is that this is my camp — I came in when the team started,” he added. “I worked with Rashad. I worked with all of these guys and I was there before Gilbert came into the gym, before Vitor (Belfort) came into the gym, before any of these guys came in, so to go through all of that and then see how things were playing out, it was stressful.”

Moving and trying to establish new roots or a rapport with new coaches and teammates is challenging enough, but there was an emotional element to the changes that impacted Usman as well.

“It’s difficult because it’s the guys I’ve trained with,” he said, his voice carrying hints of sadness and loss, like someone who had poured everything into a relationship only for it to eventually run its course and come to an end. “When you’re teammates like that and you train together, you may not always say you’re the best of friends, but when I’m on a team with somebody, I go above and beyond to help them in any way that I can. That’s my M.O. and I’ve kind of gotten lost in it over the years because every week, I’m travelling to help these guys.

“I’ve cornered Gilbert for fights; I flew to Brazil to corner him for fights,” he recalled, both highlighting his commitment to his teammates and underscoring the complexity of the situation he dealt with in 2020. “My relationship with those guys is different because I want to give anything possible to help them, but it’s changed because over the years, you’re reminded over and over and over again that this is not a team sport; it’s an individual sport.

“This is one of those cases where you’re reminded of that.”

The former teammates were slated to square off at UFC 251 in mid-July, but the surging Brazilian challenger was forced out of the championship pairing just a handful of days prior to the event after testing positive for COVID-19.

After decamping from South Florida and putting himself through multiple training camps over the previous handful of months, Usman wanted to remain on the card and get some return for all the sweat he’d left on the gym floor, so when the promotion tabbed Jorge Masvidal to fill in for Burns, the reigning welterweight champion did what he’s done throughout his UFC career: he accepted the fight, no questions asked, and handled his business.

“I only fought once this year, but I’ve trained for three or four fights, and that’s why for me, (this year) doesn’t seem that bad,” said Usman, reflecting on his 2020 campaign. “To the public, it’s ‘Oh, he only fought once,’ but they don’t know that the hardest part of what we do is preparing for these fights.

“The public only gets to see us that one night, but preparing for these fights is the hardest thing possible, and I trained in April — didn’t happen; May — didn’t happen; and I was talked to about fighting in June. I’m staying in shape, training that whole time. July almost fell out and that was part of the reason I took that fight on a week’s notice.

“I’m the champion and I risked everything — I risked my title, my livelihood to go against a new guy in six days,” he said of facing Masvidal. “I could have said, ‘No,’ but after doing back-to-back-to-back training camps, I was like, ‘We need to go in there and fight someone; somebody needs to step up and fight.’”

When they squared off on July 12, Usman turned in another dominant performance, suffocating Masvidal with his relentless pace and non-stop grappling en route to a unanimous decision victory that pushed his unbeaten run under the UFC banner to an even dozen, making him one of only eight people to win 12 consecutive fights or more inside the Octagon.

While the reigning welterweight champion’s approach isn’t everyone’s cup of tea, there is someone who respects Usman’s efforts and sees his potential inside the UFC cage — UFC President Dana White.

“It means a lot; it means he’s starting to see and recognize (what I’m doing and what I’m chasing),” Usman said when asked about White’s comments and lofty projections for him. “I think he’s starting to understand that I’m that guy who has always been willing to fight. I’ve never said, ‘No, I’m not fighting that guy,’ and I think he respects that.

“We live in an era — a social media era — where a lot of guys are loud and boisterous or into the whole entertainment aspect of this,” continued Usman, framing things in a wider context. “I got into this sport because it gave me another opportunity to compete and that’s all I wanted to do.”

Winning is all Usman has done since losing the second fight of his professional career, thanks to a devastating mix of natural talent, work ethic, toughness, heart, an inextinguishable competitive fire, and some veteran guidance from his “big brother” Rashad Evans.

“I was going into my third fight, which was about eight months after the fight I had lost. At that point, I was living with Rashad and he had 19 or 20 wins and maybe one or two losses, and I was thinking to myself, ‘How do I get to the point where I have that many wins?

“At that point, I was looking at how hard it was to train and get to another fight, so I’m thinking, ‘That’s impossible; how am I going to get to 10 wins?’ because I see how stressful it is. I talked to Rashad and he was like, ‘You take it one fight at a time, and you’ll be surprised where you end up.’”

That third fight came against Rashid Abdullah at VFC 41 in Ralston, Nebraska. Usman won by first-round technical knockout midway through the 15-fight card that also featured a host of former and future UFC competitors, including Mirsad Bektic, Jason Brilz, and Anthony Smith. 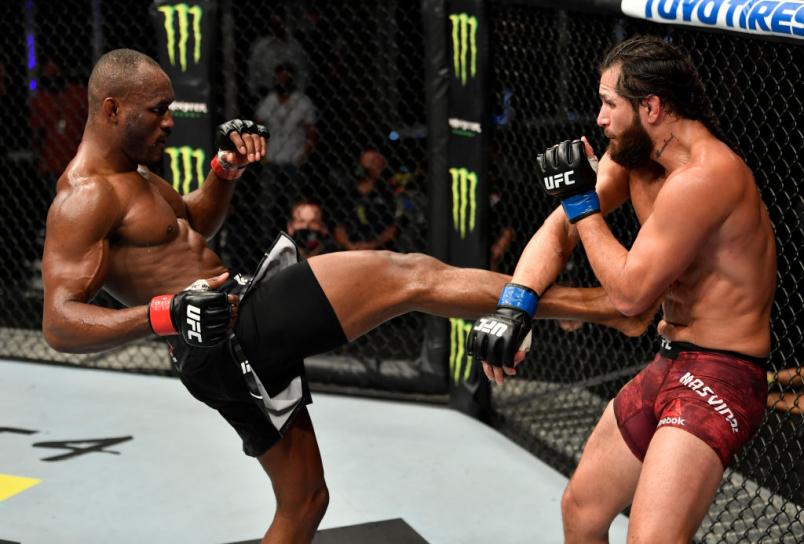 He’s been getting one step closer to reaching the 20-win mark with each subsequent appearance.

“I remember having that same exact thought again when I fought on the finale of The Ultimate Fighter,” continued Usman, who defeated Hayder Hassan in the finals of the welterweight competition on Season 21 of the long-running reality TV competition. “I remember going into it thinking, ‘There are guys on the card that are 23-4 and I’m in the finale at 5-1’ and I remember how crazy that was to me.

“But I decided I was going to take it a fight at a time like Rashad said. After I fought Tyron Woodley, somebody asked me what my record was, and I didn’t know because I don’t pay attention to it. One day I was forced to look, and I was 15-1 or 16-1 or something like that and I was like, ‘I made it here!’”

“Here” is back to feeling like a beginner again training under Wittman, his detail-oriented head coach.

“Here” is waiting on a date to defend his title against Burns.

“Here” is a point where his achievements and skills are undeniable.

“Here” is 17-1 and the top of the welterweight division in the UFC, and after a year highlighted by upheaval and change, that’s one place Usman has no intention of moving from next year or any time soon.